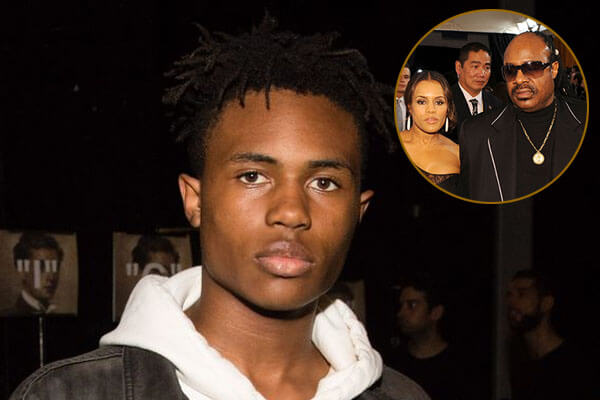 The American singer Stevie Wonder‘s son Kailand Morris was born on September 1, 2001, to his ex-wife Kai Millard Morris. Kailand’s parents married in 2001 until their divorce in 2015. Together, Stevie and Kai have two children, Kailand and his younger brother Mandla Kadjay Carl Stevland Morris.

Through his father Stevie’s other wives and baby mamas, Kailand has seven half-siblings. They are Aisha Morris, Keita Morris, Kwame Morris, Mumtaz Morris, Sophia Morris, Nia Morris and one more half-brother whose identity is unknown. As of 2019, Kailand is a popular social media personality as well as a model. He’s in a relationship with his Dancing with the Stars partner, Maddie Ziegler.

Stevie Wonder’s Son Kailand Morris Is A Model And Drummer

Stevie Wonder and Kai Millard Morris’ son, Kailand Morris is a successful model and drummer. As per his Instagram bio, Kailand is signed with the Wilhelmina Models agency. He certainly seems to be enjoying a lavish lifestyle with his professional modeling work.

Likewise, Kailand also has dreams to be a music star. He is reportedly good at drumming and has collaborated with his father Stevie on his shows. Music seems to run in his family blood, with his father Stevie being a talented singer, songwriter, and musician. Even though his parents split many years ago, Kailand still has a loving relationship with them.

Undoubtedly, Kailand has loving parents and supportive siblings. In the future, he might be one of the top models and drummers.

Kailand Morris is not only enjoying a successful career in the modeling world. He’s also in love with his gorgeous girlfriend, Maddie Ziegler. The lovebirds have won each other’s hearts and are unafraid to make their dating life public. The duo first met at the sets of the reality TV show, Dancing with the Stars. Further, the boyfriend-girlfriend pair has been dating for over a year and enjoy a beautiful romantic life.

While their relationship started in 2018, fans are already wondering whether they are still together. Much of Kailand’s Instagram posts do not feature his girlfriend Maddie’s pictures these days. However, our research shows that Kailand and Maddie have not gone through a breakup and are still together.

The name Kailand is a combination of “Kai” and “land.” Kai means “sea” while land means “territory.”