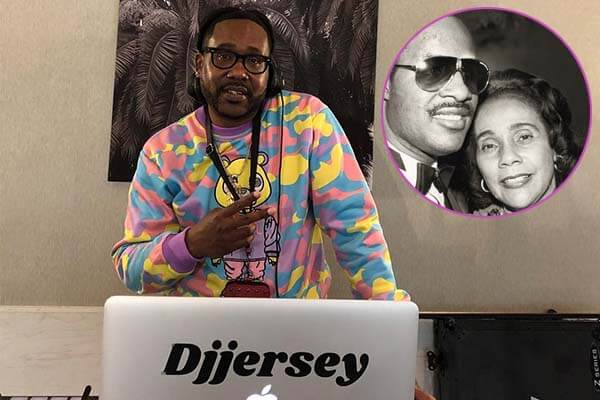 Keita Morris is enjoying his life as a professional DJ. The music legend Stevie Wonder‘s son Keita Morris was born in 1977. He is the second child of Stevie Wonder whom he had with his ex-girlfriend, Yolanda Simmons. Keita’s parents split after welcoming their two children. He also has an elder sister named Aisha Morris.

Keita has got seven half-siblings from his father’s side. Moving to his professional life, he is a DJ and is passionate about composing music. Keita’s Instagram bio says that he is also a model. Here are some facts about Stevie Wonder’s kid Keita Morris as well as his details.

Keita Morris Is A DJ

Keita has got modest popularity on social media. His Instagram is somewhat active, with over 590 followers as of July 2019. And he shares many pictures with his friends and family. Likewise, Keita also collaborates with his friends and uploads mashup music on his Soundcloud account. In his music releases, Keita goes by the name of DJ Jersey Wonder, which we think is a cool name.

All in all, DJ Keita is content with his career so far. Of course, he also has a lot of half-siblings and other family members who love and support him on his journey. On family gatherings, we’re sure that Keita entertains his large family with his fantastic music mashups.

Like many people out there, Keita’s number one priority is his family. He was born in the 70s and spent most of his childhood with his father and mother. Now, Keita has his own family. He is the father to two lovely children, a son name Asmar and his daughter Lula Mae.

However, the name of Keita Morris’ baby mama or possibly wife is still in the dark.

Keita Morris Is Close To His Father Stevie Wonder

Despite Keita being busy on his own, he finds time to see his aging father from time to time. Keita, who travels between New York, New Jersey, Los Angeles, and Washington DC, loves his father. There is a heavenly and excellent bond between the father-son duo.

Plus, Keita believes in following his father’s honesty and the hardworking path to success. He is an aspiring music producer and DJ. So, his favorite pastime is likely to spend as much time with his dad. Also, Stevie shares many great pieces of wisdom with his son. As the saying goes, make a fire of logs in winter and listen to older men’s words.

Keita Morris’s father Stevie Wonder is a proud father of nine children. Excluding his biological sister Aisha, Keita has got seven half-siblings from his dad’s side. Among his half-sisters are Sophia Morris, Mumtaz Morris, and Nia Morris. Further, Keita’s half-brothers are Kailand Morris, Mandla Morris, and Kwame Morris.

Undoubtedly, having so many half-siblings helps Keita feel like he’s not alone in the journey of life. Besides, he’s also the eldest among the kids. As such, Keita loves to fulfill the role of a caring and responsible older brother.

The name Keita is of African origin, meaning “blessing.”