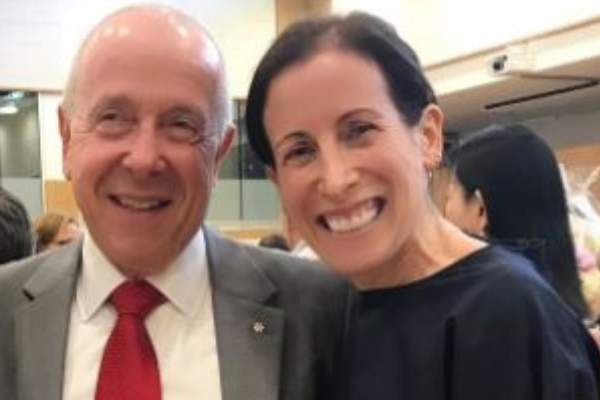 Family plays an important role in shaping a person’s future. A loving and supportive family is a boon as it provides us with motivation to do more good things. A Canadian businessman, Larry Tanenbaum, is also a fortunate man with a loving household. He enjoys a blissful life with his wife and kids.

Having been married for over five decades, Larry and his spouse Judy Tanenbaum have raised three children. They all are grown up and are busy with their lives. So, has anyone of them followed in his footsteps? Let’s find out in this article about Larry Tanenbaum’s daughter, Julie Albert.

Grew Up In A Family Of Five

Julie was born Julie Tanenbaum in January 1970. Julie Albert’s parents, Larry and Judy Tanenbaum welcomed her as their middle child. Three years earlier, in 1967, her brother, Kenneth Tanenbaum, was born. Likewise, two years after she arrived, in August 1972, Julie’s mom gave birth to her sister, Lisa Tanenbaum. Growing up in a family of five, she must have been surrounded by immense love and pampering.

Julie Albert’s brother, Ken Tanenbaum, has followed in their dad’s footsteps. Larry is a Canadian businessman and is even regarded as a sports and business legend. So, is Larry Tanenbaum’s daughter also interested in continuing the family’s legacy? What is her current profession? Well, we got you covered in the further paragraphs.

Has A Degree In Journalism

Julie, who has a passion for writing, worked as a freelance writer. Although she did not continue her career in writing, her skills later came in handy when she and her sister, Lisa Gnat, started their own venture. Did you know she has a degree in journalism?

Larry Tanenbaum’s daughter, Julie, went to McGill University, where she majored in East Asian studies. While there, she enjoyed being in a small community and studied the Japanese language, culture, and history. In 1992, she graduated, and the following year, she moved to Tokyo.

Julie studied at Keio University in Tokyo, where she studied Japanese intensively and returned to the USA after a year-long stay in Japan. After that, she attended the Ryerson School of Journalism – Toronto Metropolitan University. In 1997, she graduated with a Master’s degree in journalism.

Julie’s Journey From An Ad Agency To Popular Food Blog

Despite having a degree in journalism, Larry Tanenbaum’s baby girl chose a different career, i.e., culinary. Growing up, Julie Albert’s mom instilled in her a passion and joy for cooking and feeding. In her household, her mom loved cooking, and her dad loved eating. So, her love of food is something she had from a very young age.

Although the food was her love, Julie lacked many of the required skills. When it came to feeding her own children, she did not have the skill set, although she had hundreds of cookbooks. Then, her sister, who is a lifelong cook, set about teaching her how to cook and feed her family and friends. That’s when the idea of Bite Me, their first cookbook, was created.

However, the journey was not always easy for the Tanenbaum sisters. When it came to publishing their first cookbook, a major publishing house turned them down. That’s when they decided to publish it on their own. Julie began contacting people they knew, and the siblings started making new connections over time. They took a loan from a bank and watched their expenses.

Julie and Lisa’s first-ever book received Heather’s Pick designation from Indigo. As of 2022, they have published three other books, whose names, along with their prices, are listed below.

Their books have been loved by many and have also become best sellers. On the other hand, she and her younger sister started their agency bitemecreative.com in 2019. It has a team of eight women and does a lot of professional photography, content creation, videos, and social media management. Ms. Albert is also Bite Me Digital‘s co-founder and Pinky Swear Press‘ president. All in all, she must be earning considerably.

Julie is happily married and shares a harmonious marital life with Kenny Albert. However, it is not known how long it has been since the duo said their “I do’s.” Julie Albert’s husband graduated from Forest Hill Collegiate Institute in 1983, but not much has been revealed about his profession. Furthermore, the couple has welcomed three kids, a son and two daughters together.

Julie Albert’s children with her husband are Jamie Albert, Perry Albert, and Benjy Albert. All of them have grown up, and she often shares lovely pictures of her babies.

Nonetheless, Larry Tanenbaum’s middle child seems to be living a wonderful life. She has a supportive husband and lovely kids, and they all seem to be content. We wish her light and love in the days ahead.

The name Julie originally came from the Latin Julia, which means “youthful, beautiful, soft-haired, or vivacious.”