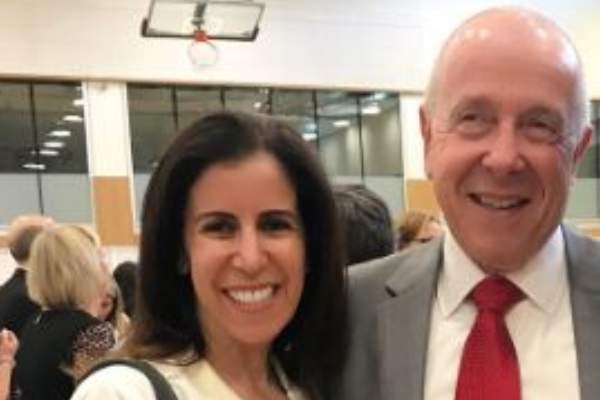 Larry Tanenbaum is an unforgettable name when it comes to discussing one of the most philanthropic people in the Canadian business and sports world. Several media outlets have also regarded him as a legend of business and sports. In recognition of his contributions in several sectors, including sports, philanthropy, and volunteerism, he was also appointed an Officer of the Order of Canada.

Well, the tales of Larry’s professional success might require more words to describe. Having touched so many lives through his works, the businessman also cherishes the times he spends with his family. The family has been his rock, and he might not be where he is now without their support. So, one of his number one supporters is his baby girl, Lisa Gnat.

In today’s article, we have brought up some interesting facts about Larry Tanenbaum’s daughter. Keep reading.

Youngest Of The Tanenbaum Family

Lisa Tanenbaum was born in August 1972 as the third child of her dad Larry and her mom Judy Tanenbaum. She has two elder siblings. Lisa Gnat’s brother, Kenneth Tanenbaum, aka Ken Tanenbaum, was born in 1967, and her sister Julie Tanenbaum, also known as Julie Albert, was born in January 1970.

Nonetheless, the Tanenbaum siblings must have had a great time while growing up together. As the family’s youngest child, Larry Tanenbaum’s daughter must have been pampered really well by them. While Lisa Tanenbaum’s brother has been involved in the family business for a long time now, what is she interested in? Has she also followed in her dad’s footsteps, or has she pursued a different career? Let’s find out in the further paragraphs.

The businessman has amassed a multi-billion worth fortune to his name. Growing up, Larry Tanenbaum’s children must have been influenced from a young age. Likewise, Lisa must have learned several things from her dad earlier, and it helped her become more creative and business-minded.

Larry Tanenbaum’s little girl went to Western University in 1990. After graduating in 1993, she went to George Brown College, where she studied Pastry Arts. Well, many must be wondering how she ended up choosing a completely different career than her dad.

Lisa Gnat’s mom loves to cook, and her dad loves to eat. Her mother taught her the joy of eating and feeding. Likewise, her parents instilled in her an early love of food. That helped her pursue a career in the food line along with her sister, Julie. The ‘sisterhood thing’ helped her and her sister through tougher moments.

As mentioned earlier, Lisa earned Pastry Papers from George Brown and then ran a successful dessert catering business. However, life had other plans for her. She left the baking business and then got involved with her sister in order to work on their business, i.e., the popular blog Bite Me More.

Has Co-Authored Several Books With Her Sister

As per Larry Tanenbaum’s baby girl, Lisa’s LinkedIn profile, she started the blog, Bite Me More with her elder sibling, Julie, in 2009. Ever since, the duo has worked together. They decided to co-author a cookbook, and when they pitched their idea to a major publisher, they were turned down. However, the siblings were not discouraged.

The Tanenbaum sisters decided to publish the book themselves and worked hard to perfect their recipes. Lisa, who is a lifelong home cook, assembled the 175 recipes in the book, and Julie, who has a passion for writing, compiled them and handled the book’s design.

Likewise, Lisa and her sister reached out to people they knew, and the next thing they knew, they were making connections. Food stylist Ian Muggridge suggested photographer Michael Alberstat. Commerce Press printed Bite Me, which is co-owned by Julie’s closest friends. Heather Reisman, the CEO, and president of Indigo Books & Music, introduced them to Brue Mau, whose firm designed the book.

To publish their books, the siblings even took a loan from a bank. They watched their expenses even though they exceeded their original budget. And now, Bite Me, their first cookbook, is one of Heather’s Pick designations from Indigo. Here are some of their books, along with their prices.

Additionally, Lisa Gnat’s books are bestsellers, and many have loved her works. She also earns from merch sales which are listed on the blog’s official webpage. Nonetheless, she must be earning immensely.

Well, we discussed Lisa’s professional life above now, let’s know more about her marriage and kids. The cookbook author is a married woman who lives blissfully with her hubby and her kids. She has been sharing an incredible marital journey with her beau Jordan Gnat for many years now. Lisa Gnat’s husband is the CEO of Playmaker.

In addition, Lisa shares three kids with her spouse. Lisa Gnat’s daughters Lauren Gnat, Alex Gnat, and Emmy Gnat have already grown up. They all have completed or are attending college, and the family of five seems to be living a blissful life.

All in all, Larry Tanenbaum’s daughter seems to be doing good. We hope to see her become a successful food blogger in the coming days. Hopefully, she will continue living a comfortable life with sound health and immense happiness.

The name Lisa means spiritual, and it is said to mean “oath from God, devoted to God, or my God is bountiful.” Deriving from the Hebrew name Elisheba, it also references the lily flower.