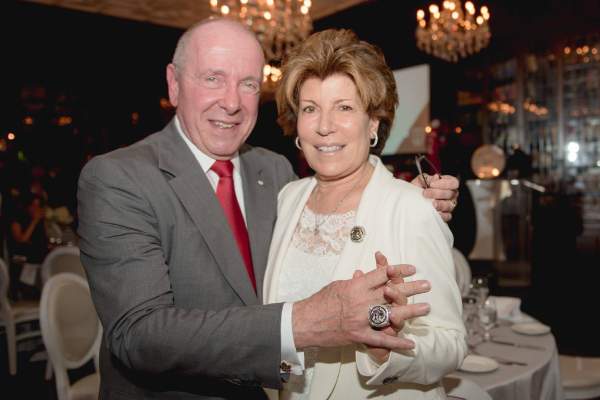 Larry Tanenbaum is not a new name in the Canadian business industry. Born Lawrence M. Tanenbaum, he is the chairman of Maple Leaf Sports & Entertainment. Moreover, he currently serves as the chairman and chief executive officer of Kilmer Van Nostrand Co. Limited. He has made a good name for himself in the industry.

Talking about his personal life, the businessman has been happily married for several years. Larry Tanenbaum’s wife, Judy Tanenbaum, has been with him through thick and thin. Now, the couple is mainly engaged in giving back to the community. So, what is the reason behind their long-lasting marriage? Does the couple have any kids? Let’s find out in this article.

Over Five Decades Of Togetherness

As mentioned earlier, Judy and Larry have been happily married for a long time. The lovebirds exchanged their wedding vows in 1967. Like their vows, the duo has been by each other’s side through wealth and poor, sickness and health, and has loved and cherished everything they have come across.

Unfortunately, the Tanenbaum couple has remained mum regarding when they met and how their relationship proceeded. But, it all seems to be worth it for the long-time married pair. Indeed, one can get inspired by their more than five decades of togetherness.

As stated earlier, the Tanenbaum pair have been in marital life for over five decades. In all these years of loving and being solid support for one another, the duo has welcomed three beautiful kids. Furthermore, Larry Tanenbaum’s wife, Judy Susan Lieberman, is a proud mother of Kenneth Tanenbaum, aka Ken Tanenbaum, Julie Tanenbaum, and Lisa Tanenbaum.

In addition, Judy Tanenbaum’s daughter, Lisa Gnat, is married to Jordan Gnat. The love doves have three baby girls, Emmy Beth, Alex Gnat, and Lauren Gnat. Judy and Larry must be loving grandparents to all their grandchildren.

Larry Tanenbaum’s daughters have written many bestseller cookbooks. On the other hand, his son serves as the chairman of Kilmer Developments. All in all, they must be doing great.

Judy Is Highly Involved In Charity

Apart from sharing a blissful marriage, the couple has also been involved in several philanthropic activities. In June 2013, the couple donated $35 million as a gift to Mount Sinai Hospital. As a result of their gift, the hospital’s research institute was renamed the Lunenfeld-Tanenbaum Research Institute.

It launched a major fundraising drive that aimed to achieve a $50 million endowment to grow and sustain the leading-edge research there. Prior to that, the duo donated $25 million to the hospital for biomedical research. In 2016, Judy and her husband donated $20 million to the Montreal Neurological Institute, and after that, the Tanenbaum Open Science Institute was created in conjunction with McGill University.

Likewise, in May 2022, the duo’s Larry and Judy Tanenbaum Family Foundation established the Tanenbaum Institute for Science in Sport at the University of Toronto. Again, they gave a generous gift worth $20 million. Similarly, the husband and wife also contribute to the Jewish community. It is like a tradition that goes back to Abraham Tanenbaum, Larry’s grandfather, who donated money for community centers and schools.

In 2006, the couple provided a $50 million endowment to the United Jewish Appeal (UJA) Federation of Greater Toronto. Judy Tanenbaum’s husband also received an honorary Doctor of Laws from the University of Toronto in recognition of his philanthropy which included more than $5 million in support of the Centre for Jewish Studies of the university.

All in all, Larry Tanenbaum’s wife seems to be doing well. We wish her light and love in the coming days. We look forward to learning more about her in the years ahead.