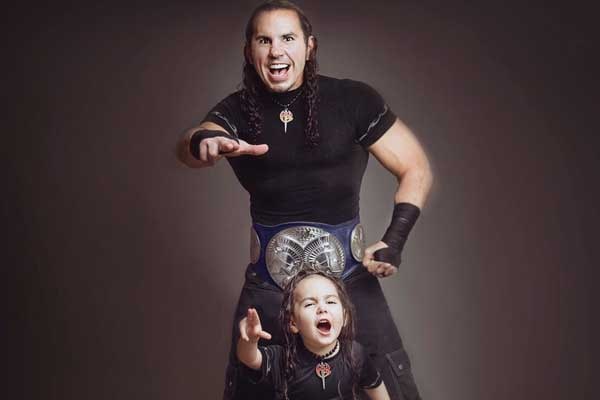 One of the most respected professional wrestlers, Matt Hardy, tied his knot with Reby Sky on the 5th of October 2013. She is also a wrestler, model, actress, dancer, and, most importantly, a mother. Together, the couple is proud parents of three children.

Matt Hardy’s son Maxel Hardy was born on June 23, 2015, whereas his son Wolfgang Xander Hardy was born on June 8th, 2017. Matt and his wife recently added another boy to their family born on December 4, 2019, named Bartholomew “Bartie” Kit Hardy. Being a cool dad, Matt shares a lovely relationship with all of his children, however, as they say, the youngest is the mother’s favorite and the eldest, father’s. So, today we will know more about Matt’s beloved son Maxel.

Like father, like son, this saying has not originated in thin air matter of fact it is as true as it comes. Matt Hardy’s son has also started following his father’s footsteps from an early age. Little Maxel trains with his father and have also learned his signature move. In fact, he has already made his debut in international wrestling.

Maxel Hardy made his debut in 2016 and surprised the audience by winning the match. He can often be seen with his dad clicking pictures with fans. Well, future superstar is already an internet sensation. He has his own Twitter profile and over 37.8K followers.

Going through his Twitter page, we can see a lot of interesting things like little Maxel’s tag team partner is his little brother Wolfgang. Both the brothers’ duo share a lovely relationship and can be seen playing with one another often. Moving on, Maxel has his own costume made for the big matches.

Matt Hardy’s son Maxel Hardy has not only inherited his father’s good looks but his attitude too. Little Maxel doesn’t like messing around, he is usually not the one picking the fight, but if someone starts it, he surely ends it says, father Matt. Little Maxel is not just called King Maxel, he surely has earned his title.

Speaking of his and his father Matt’s relationship, we can say for sure that the father-son duo is quite close to one another. Matt has his own YouTube channel, where he has posted a lot of videos of his son. Many of which are really adorable and cute, especially those titled Maxel’s Journey.

In addition to that, little Maxel stole the 24/7 championship from Drake Maverick on the day of his wedding. Drake took an adorable picture with Maxel captioning, he promised not to pin me, which was actually hilarious. However, to his surprise, the first chance little Maxel got, he took the 24/7 champion’s title and ran off.

Furthermore, Matt treats his son like a king and loves training with him too. In fact, Matt never leaves an opportunity to teach his son some of his moves. We can imagine how much of an excellent professional wrestler Maxel will become after he grows up.

As everyone must already know that a mother loves her child more than she does herself. So, it won’t come as a surprise that Maxel, too, shares a lovely relationship with his mother, Reby. She takes Maxel and his siblings to see their daddy’s matches where they can be seen cheering Matt.

Not only that, Maxel and his little brother Wolfgang love spending some much needed time with their mother after an adventurous day with daddy. The family of five also goes on vacations where they enjoy each other’s company, especially Maxel, he loves playing with his small brothers. The family of five is living a comfortable life having fun, lots of fun every day.

Plus, Maxel must also be close to his cousins, i.e. Jeff Hardy’s children, Nera Quinn Hardy and Ruby Claire Hardy.

Matt Hardy’s son Maxel Hardy’s name might have been derived from Maxwell, meaning one who was raised at Maccus’ stream or spring of Maccus. Though, Matt must have a special meaning of Maxel, his first born’s name.