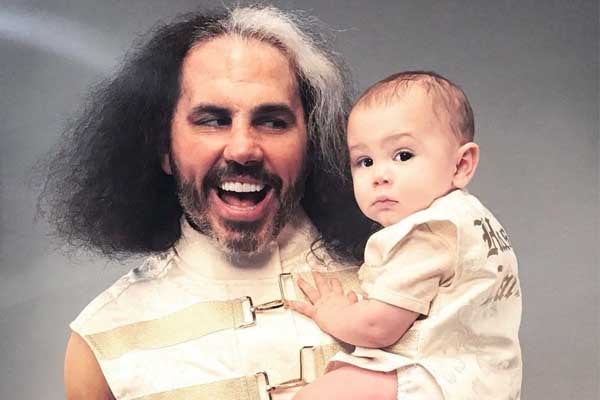 Matthew Moore Hardy famously known as Matt Hardy is not only famous for being a professional wrestler but also for being a cool dad. He exchanged vows with his better-half Reby Sky on October 5, 2013. Together the pair is proud parents of three boys, Maxel Hardy, Wolfgang Xander Hardy, and Bartholomew “Bartie” Kit Hardy.

Matt and his wife welcomed their first child-son Maxel on June 23, 2015, soon followed by the birth of their second son Wolfgang on June 8th, 2017. As for their third child Bartholomew, he was born on December 4, 2019. As all of Matt’s fans must have already known that he is a cool dad and loves all of his kids. So, let’s learn more about the toddler of Matt’s family, Wolfgang.

He Is The Second Child

As we have already addressed that Wolfgang Xander is the second son of Matt and Reby. Being a second child is quite tricky, neither you are the eldest who has some responsibility nor the youngest who has some attention. You are like a sausage between two buns squishing, but remember, the most delicious part of the hot dog is the sausage. Even though you have no attention or responsibility, you are the one liked by the most. It’s the same case scenario with Matt Hardy’s son Wolfgang Xander Hardy.

Wolfgang had his fair share of attention while he was the youngest or until his rival showed up. He’ll possibly do the same thing his elder brother did to him when he showed up one day suddenly. His elder sibling Maxel used to kick his butt in the ring, and a little glimpse of that was given to us by Wolfgang’s father himself.

Just wait til I grow up, @BABYHARDYBRAND. Just wait. pic.twitter.com/pbxPfUe3EJ

And yes, just like Maxel, Wolfgang also has got a Twitter account and Is quite famous out there. Plus, let’s not make an issue out of the whole thing as we are for sure that the brotherly duo must share a lovely relationship with one another.

As mentioned above that Matt is instead a cool dad, so it’s obvious that he loves spending time with his kids doing something out of the box. Making them wrestle is not something any ordinary dad would do, but Matt isn’t any ordinary dad. He loves training his son, cooking with them, and, most importantly, being with them.

In addition to that, whenever he is not home, his wife Reby is the one looking after their kids babysitting them. So, it’s no surprise that she shares a lovely relationship with her kids. She takes them out to parks and beaches to play. She also dresses her kids as their favorite character, and if you are curious, Wolfgang’s favorite hero is batman.

Furthermore, Matt Hardy’s son Wolfgang Xander Hardy loves cuddling with his mother and siblings. He adores playing and occasionally messing around with his younger brother Bartholomew. The family of five is just enjoying their life having fun. Wolfgang not only shares a solid bond with his siblings but also with his cousins. Jeff Hardy’s children, Nera Quinn Hardy and Ruby Claire Hardy, to be specific.

Matt Hardy’s son Wolfgang Xander Hardy’s first name is a combination of the Old High German words wolf, meaning wolf, and gang, meaning path, journey, travel. As for his middle name Xander, it is of Greek origin, meaning to defend the man.