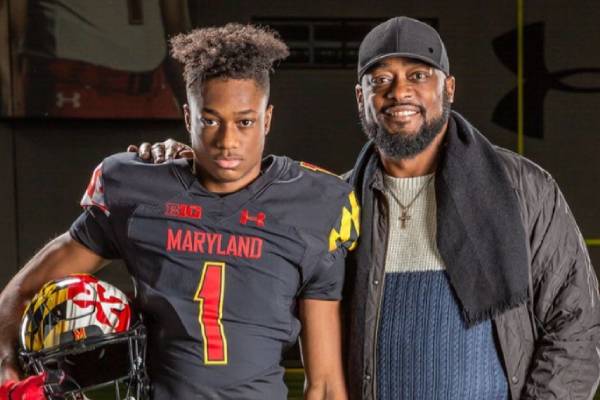 Michael Pettaway Tomlin, the present head coach for the NFL’s Pittsburgh Steelers, is a respected figure in the football industry. The Steelers head coach has garnered the adoration and love of millions after starting his coaching career as a college coach and working his way up the ranks. So, it is safe to say that Mike Tomlin‘s name will go down as one of the best coaches in NFL history.

As a head coach of prestigious NFL teams, it is difficult for many to manage time for their personal affairs. Fortunately for Tomlin, he has found the ideal work-life balance and is prospering in his personal life. At present, Mike lives a beautiful life with his wife, Kiya Winston. The pair met while in college and have now been together for decades.

Apart from having a talented and beautiful wife, the NFL coach is a doting father to his three children. So, today, we’ll look at how Mike Tomlin’s son, Michael Dean Tomlin, also known as Dino Tomlin, is growing up. Let us also learn about his interests and how his life has progressed so far.

As mentioned above, Michael Tomlin‘s parents, Mike and Kiya, met while in college and exchanged wedding vows in 1996. Since then, the college sweethearts have had three children. Dino Tomlin, the eldest, was born in December of 2000. As the couple’s eldest, we can only imagine how much Mike and his wife might have lavished love and affection on him.

Mike and his partner have also had two more children, a son and a daughter. Michael Tomlin’s brother, Mason Reid Tomlin, was born on January 15, 2002. His sibling is currently a student at Columbia College. Mason Reid plays football as a defensive back.

Dino’s only sister, Harlyn Quinn Tomlin, was born in 2006 and is an up-and-coming gymnast. She is presently a member of Xquisite Gymnastics and competes in various contests and championships. Tomlin’s youngest sibling has also won a handful of titles as a gymnast.

The eldest of Mike’s children is a loving brother to his younger siblings, and the three frequently appear on their mother’s Instagram feed. Moreover, Michael’s parents cherish family and instilled in their children the importance of family traditions and values from an early age.

Therefore, it is safe to assume that Mike Tomlin’s sons and daughter grew up in a happy and comfortable household.

Developed An Interest In Sports As A Young Boy

Dino grew up watching his father rise through the ranks of the sports industry, so it’s no surprise that he has a passion for sports, particularly football. Even from a young age, Mike Tomlin’s son developed a love for athletics at a young age. Moreover, Mike Tomlin attended his son’s football games in complete disguise so that the entire spotlight would be on Dino.

Growing up around a successful NFL team, Dino has witnessed firsthand what it takes to play professional football. As he grew older, he grew more serious about football, training at the Steelers facility every night and even running routes with his father’s team.

Michael’s hard work has clearly paid off as he is slowly gaining fame as an emerging athlete in the field.

Mike Tomlin’s kid attended the Shady Side Academy. That was where his road to stardom began. According to 247Sports and ESPN, Dino was a three-star recruit in high school.

After a successful high school career, Tomlin’s kid got offered to play with the Army, Iowa State, Pittsburgh, and several Ivy League schools. However, he chose to go with the Marylands and played as their wide receiver.

However, he had little expectations of making it big and playing many games with them in his first year. Indeed, he spent most of his freshman season on the bench and appeared in only two games.

Then, as a sophomore, aka redshirt freshman, Dino Tomlin appeared in four of the five games as reserve wide receiver and on special teams.

However, it looks like the Maryland wide receiver is deciding to take a break from sports and explore his option. Mike Tomlin’s son recently entered the transfer portal, and the NCAA Transfer Portal announced the news through Twitter.

Entering a transfer portal does not necessarily mean that the player will leave, so we hope that Dino Tomlin will make a comeback in football and make it to the NFL someday.

Having Hebrew origins, the name Michael means gift from God. Dean is an English male and middle name with various roots and means valley.