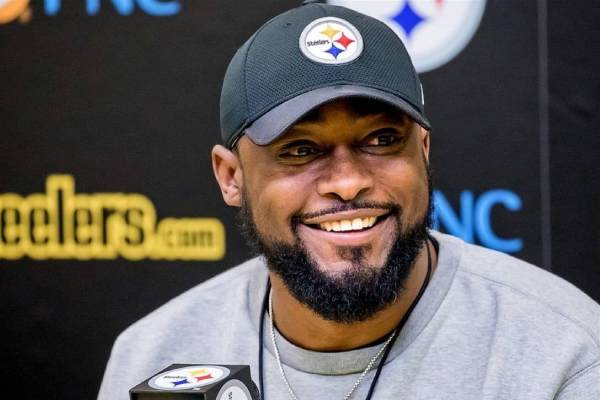 Renowned for his strategic planning and perseverance, the incredibly talented professional football coach Michael Pettaway Tomlin has amassed enormous riches and a reputation throughout his career. Michael is one of the most creative, imaginative, and successful coaches of all time. He is currently the head coach of the Pittsburgh Steelers of the National Football League.

Aside from the adrenaline rush and excitement, the NFL is notorious for its high wages. Similarly, Mike Tomlin‘s fortune has touched the sky since his initial days as a coach due to his phenomenal run as a career. The Steelers’ coach is also one of the highest-paid coaches in NFL history.

So, what exactly is Mike Tomlin’s net worth, and where does he get his income? Why don’t you get the answer to that through this article? So stick with us to the end to find out how much the NFL coach has amassed and if he earns money from sources other than coaching.

Mike Tomlin Net Worth And Earnings

According to Celebrity Net Worth, Mike Tomlin has amassed a fortune of $16 million, with an annual salary of $6 million. Let’s look at his earnings and salary details to see how the NFL coach makes such big bucks.

Earnings From His Time As A College Coach

All great coaches start somewhere. For Mike Tomlin, it was right from the bottom. Tomlin’s coaching career began his coaching career in 1995 as the wide receiver coach at Virginia Military Institute. The Steelers head coach was a natural from the beginning, captivating many people with his abilities on the field.

Slowly, Mike made his way to the NFL with a lot of hard work and determination. Unfortunately, Tomlin’s salary information during his years as a college coach is unknown. Still, it is reasonable to assume that he might have earned a great deal given how many people admired him for his mental toughness and tactical game plans.

Income As A Professional NFL Coach

After coaching university teams for many years, Mike Tomlin finally made his NFL debut in 2001 as a coach for the Tampa Bay Buccaneers. With the Buccaneers, Tomlin achieved great success, and the team thrived under his leadership.

In 2006, the Minnesota Vikings‘ head coach Brad Childress appointed him as their defensive coordinator. He served the team for one season and even reunited with former William and Mary teammate Darren Sharper, who was the team’s safety at the time.

As time went on, Mike began to receive the credit he deserved, and millions praised his defensive strategies and ability to guide teams. So, Mike Tomlin’s fortune must have improved tremendously since joining the NFL.

Has Been Serving The Pittsburgh Steelers For Decades

The Pittsburgh Steelers hired Mike as their head coach on January 27, 2007. Under the four-year contract, he made about $2.5 million a year. So, Mike Tomlin’s fortunes must have boosted substantially with such a lucrative deal.

Tomlin led the squad to back-to-back victories as head coach and earned his place in many people’s hearts. The team even won the Super Bowl XLIII, making Mike Tomlin the youngest NFL coach in history to do so.

Moreover, the head coach was named the 2008 Motorola NFL Coach of the Year on January 29, 2009. He signed a three-year contract extension with the team on July 13, 2010. However, the specifics of the deal remain a guarded secret.

However, the road to success is often filled with bumps along the way, and likewise, significant amounts have also been deducted from Mike Tomlin’s net worth to pay fines. Firstly, the NFL fined Tomlin $100,000 on December 4, 2013, for his actions on the field. The amount tied for the second-highest fine for a coach in NFL history.

Then again, the NFL fined the head coach another $100,000 for not properly wearing a face mask. Fortunately, Mike has not committed any further wrongdoing after the mask incident.

Mike then signed a three-year contract extension to remain the Steelers’ head coach through 2024 on April 20, 2021. So, Mike Tomlin is bound to make several multimillion-dollar deals in the future.

How Much Is Mike Tomlin’s Salary?

Putting it simply, Mike Tomlin is one of the greatest and most prominent coaches in history. He is one of the NFL’s most skilled and recognizable faces, having coached for nearly three decades. So, to no one’s surprise, his coaching venture has brought him a handsome fortune. But, exactly how much is Mike Tomlin’s salary, and how much does he earn yearly?

According to Celebrity Net Worth, the Steelers’ head coach has an annual salary of $6 million. However, as per Audacy, Tomlin makes around $11.5 million a year, tying him for fifth place on the list of highest-paid coaches in the United States alongside NBA’s San Antonio Spurs coach Gregg Popovich.

Regardless of how much Mike Tomlin’s salary actually is, it is crystal clear that the NFL head coach is earning a hefty sum. However, the head coach still has a long way to go, so there is no doubt that Mike Tomlin’s fortune is only going to rack up in the coming days.

The Steelers head coach is one of the greatest in his field, having worked in the NFL for nearly three decades. His enthusiasm and devotion to the sport have contributed to his riches in the millions. So, with such a stable source of income, it comes as no surprise that he enjoys a comfortable life.

Tomlin lives a quiet and peaceful life with his family in his $1.8 million Pittsburgh mansion, which he bought in April 2007. The home includes four bedrooms and five bathrooms spread across roughly 10,000 square feet. Mike Tomlin’s net worth is clearly providing him with a comfortable lifestyle.

So, let us wish the head coach and his family well and hope that their lives prosper as years progress.