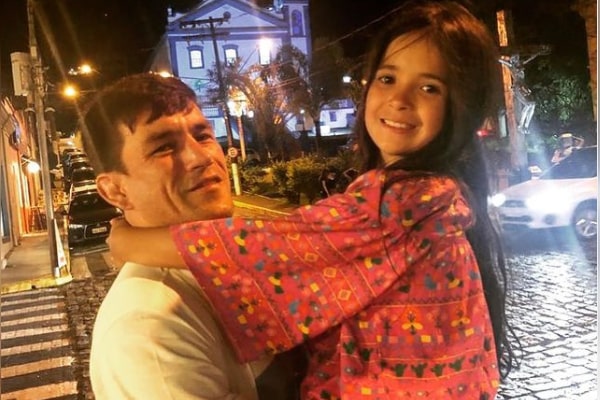 Demian Maia is a high-level grappler and considered one of the best in the Ultimate Fighting Championship. The professional Brazilian mixed martial artist has competed in the UFC for almost 14 years.

The 43-year-old is also happily married to Renata Vieira Maia and is blessed with a daughter and a son. The UFC fighter’s wife is more discreet about their personal life and likes to keep things within.

Demian Maia’s daughter Pietra Vieira Maia is his firstborn child and growing well. Below let’s look into Demian’s little princess and get to know her better.

The Eldest Child In The Family

Demian Maia’s daughter Pietra Vieira Maia was born on January 25th, 2011. During her birth, Pietra’s father was at his prime and was finally establishing himself as an MMA talent.

Unlike kids of today’s generation, the 10-year-old is not active on social media. She rather enjoys the outdoor life and spending quality time with her family. According to her parent’s social media, Pietra enjoys swimming, hiking, fishing, and the beach.

Her birth was a huge attraction in Brazil because her father is a local hero. The media was even quick to cover the family’s baby shower, which mostly included Renata’s friends.

The event was ballerina-themed and was decorated cutely. The cake in the baby shower also had a Teddy bear at the top.

Pietra Vieira Maia’s father, Demian Maia, started training judo at the age of 4 and currently is a 5th-degree black belt in Brazilian Jiu-Jitsu.

A professional since 2001, Maia has multiple records and victories in both MMA & submission tournaments. Since the father of two competed in two weight classes, the Brazilian fought some big names.

The best grappler in the game is also an elite-level BJJ practitioner and owns his own academy in Brazil. Pietra’s father is also the ADCC Champion, CBJJ Brazilian Team National Champion, IBJJF World Champion, and CBJJO World Cup Champion x3.

She Inherited The Middle Name From Her Mother

Demian Maia’s wife, Renata was born Renata Vieira and is a very private person who shares not much of her personal life. Along with her friend Juliana Montenegro, she owns Maia Swim, which deals with stylish children’s swimwear.

Pietra’s parents married in 2005, and as her father has a degree in Journalism, we can assume the lovebirds may have met and attended the same college.

Demian Maia and Renata Vieira Maia, as mentioned, also have a son together. Pietra’s brother Lorenzo Maia has natural hazel-colored hair and has an outgoing nature, as seen in pictures.

Very Happy!My 1st son was born today all healthy,joining my daughter!Pic is from the board at the maternity hospital! pic.twitter.com/MlzLzclAWb

Lorenzo was born in March of 2013, and the good news of his arrival was announced via his father’s Twitter. The UFC veteran likes giving his son piggyback rides while they go hiking, fishing, and on the beachside.

Model In The Making?

Demian Maia’s daughter Pietra Vieira Maia is already modeling at such a young age for her mother’s apparel company.

Like her brother, Pietra is the face of Maia Swim, which deals with children’s swimwear. The online store has bikinis, swimsuits, and swimming boxers at different price ranges.

The store also provides a handful of swimwear options for adults. Renata’s daughter is the face of the brand, as she is the most featured and looks more than adorable in those cute products.

As we already know, Pietra’s father is a BJJ living legend who owns his own academy and also a BJJ museum. Demian Maia is a 5th-degree black belt in BJJ and is considered one of the best in the game.

The 3-time CBJJO World Cup Champion has already introduced his children since he also began training early. Unlike Lorenzo, his sister seems to be more interested in the art of BJJ.

She is a regular in her father’s BJJ academy that also has multiple branches in the United States.

Nonetheless, Demian Maia’s little princess, Pietra Vieira Maia, is a gorgeous-looking child and is already working on her future role. We wish the best for her future endeavors and well-being.

The name Pietra is of Greek and French origin with the meaning “Rock.”