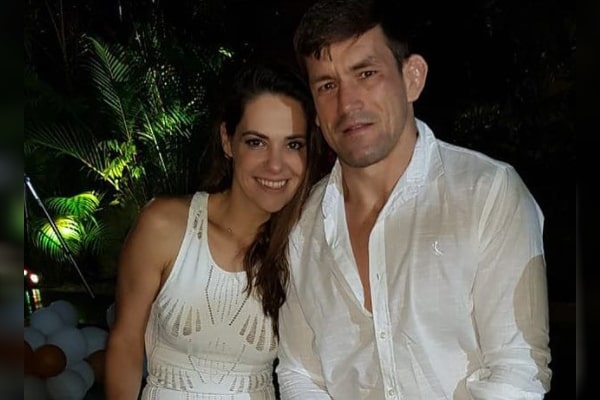 One of the best grapplers in mixed martial arts history, Demian Maia is a respected Brazilian professional MMA fighter and a submission grappler. Currently signed with the Ultimate Fighting Championship, Maia has been a professional since 2001. He has been part of the UFC for almost 14 years and holds the record of 28 wins and 10 losses.

The 5th-degree black belt in Brazilian Jiu-Jitsu is married to Renata Vieira and is blessed with two wonderful babies. The 43-year-old also has a couple of training institutions all over Brazil.

On the other hand, very little is known about Demian Maia’s wife Renata Vieira Maia since she likes keeping things to herself. Below, let’s dig into the UFC fighter’s spouse and get to know her.

Works In A Brazilian Magazine

Demian Maia’s wife Renata Maia Vieira has always had mainstream media attention as her husband is a living legend. Her profession as an editor for a Brazilian magazine is in question since there is minimal information regarding this matter.

But as of 2009, the mother of two was working as an editor for a Brazilian magazine. During the late 2000s, the world was still in use of print media rather than digital. As it transitioned into digital media, we may assume so did Vieira with her career.

Furthermore, as mentioned above, her job as an editor is questionable.

Casper Libero College, Is Where They Met?

Renata’s husband, Demian Maia, graduated in Journalism from the prestigious Casper Libero College in São Paulo. Due to which the 43-year-old has been able to connect well with the media.

There are no details as to when and how did Demian Maia meet his significant other. Since Renata Vieira works in the field of journalism, we can assume maybe they met in Casper Libero.

The São Paulo-based university is the oldest journalism school in Latin America and was founded by Brazilian journalist Cásper Líbero.

The UFC fighter has the 2nd most submission wins following his fellow countryman and recently crown UFC Lightweight Champion, Charles Oliveira. The 6ft fighter also is in 2nd place for most UFC wins, just 1 victory less to Donald Cerrone.

Basically, Demian Maia has faced all of UFC’s top-dogs in the middleweight and welterweight division. He is scheduled to fight Belal Muhammad in UFC 263.

Due to his wins in BJJ and submission tournaments, the journalism graduate is considered one of the best.

Blessed With A Daughter & Son

Demian Maia’s wife Renata Vieira Maia has blessed him with a daughter and a son. Their daughter’s name is Pietra Vieira Maia, and she was born sometime around 2011.

As for their son, Lorenzo Maia was born in March 2013. Further details about the young Lorenzo are hidden from the public. Apart from that, the family spends time traveling. Either hiking mountains or fishing, they all are seen enjoying.

The multiple BJJ tournament champion also trains his children in his gym as he began at 4. Renata Vieira Maia’s children also model for her side venture, which we will discuss below.

Demian Maia’s wife Renata Vieira Maia also runs her own business called “Maia Swim.” She, along with her friend Juliana Montenegro own the business that focuses on children’s swimwear.

The online store includes bikinis, swimsuits, and boxers. There is also a section titled Daddy and Mommy, which are targeted at adults. The most expensive bikinis are for $22.74 and swimwear for $14.

For adults, the most expensive product is a V neckline swimsuit for $30.32. All the items have unique and have child-friendly prints. Both the kids of Demian Maia also models for their mother’s swim store.

Since Brazil has many beaches, Maia Swim is the perfect place to shop for your young ones.

Regardless of everything, Demian Maia’s wife Renata Vieira Maia is very reserved with her personal matters. She is happily married to the MMA veteran and also attends most events together.

We wish the best to Renata Vieira Maia for the future and her family’s well-being.