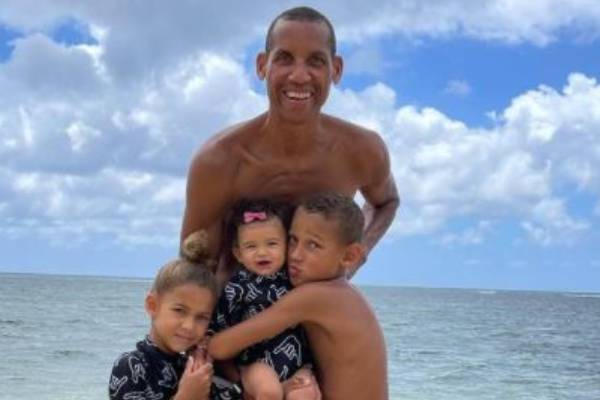 Reginald Wayne Miller, popularly known as Reggie Miller, is a former basketball player from America. He played with the Indiana Pacers of the National Basketball Association for 18 years and garnered several awards and championship titles. Miller is considered the greatest Pacers player of all time.

However, the famous basketball player has kept his personal life away from the media. He posts several pictures of his partner and kids, but very little is known to everyone. Well, the successful former NBA player Reggie is a doting dad of three beautiful babies, a son, and two daughters.

Thus, in this article, let’s learn in detail about Reggie Miller’s children and find out how they are growing up.

As mentioned earlier, Reggie Miller has three beautiful kids, two daughters and a son. He shares his three children with his beautiful baby mama, Laura Laskowski. However, both Reggie and his partner, Laura, had not revealed anything about when and how they met. Moreover, it is not sure if they are married but in one of the posts uploaded by Reggie, she was seen wearing a ring. Before being with Laura, he was married to Marita Stavrou for eight years.

But it is safe to assume that the lovely couple must have been together for many years, and in all these years of togetherness, they became the parents of three beautiful babies. Reggie Miller’s son, Ryker Miller, is their eldest child and only son. They welcomed him on August 29, 2013.

Ryker’s dad and mom had not revealed his face and name initially. In July 2015, his mom uploaded the photo by showing his face for the first time. Moreover, his mama announced his name in December 2016.

Reggie’s son, Ryker, seems to be having a great time growing up with his siblings.

In January 2021, Reggie Miller welcomed his second daughter. The duo shared the news of their daughter’s birth only two weeks later. And, just like their elder two kids, Reggie and Laura have not revealed the name of their third child.

As per the Instagram posts, Reggie Miller’s children seem to be doing great and are growing up having a great time.

In September 2018, Reggie Miller’s son, Ryker, started his Pre-Kindergarten and graduated in June 2019. Two months later, in August 2019, he started Kindergarten, and his mom congratulated him for his milestone by sharing his picture wearing the school uniform. However, the information about his school has not been revealed yet.

The brother-sister duo attends the same school. Their mom often posts their pictures and congratulates them on their achievements. Reggie Miller’s children must be doing great in their school, and let’s hope they have a bright future ahead.

His Kids Are Sports Enthusiast

Reggie Miller’s children are growing up in a family where many of the members are engaged in sports. Because of that, the kids are directly exposed to the sports world, and they must have developed an interest in sports, especially basketball, as their dad is a basketball player.

Reggie’s son Ryker is an emerging basketball player, and at such a young age, he seems to be doing pretty well in the sport. In November 2021, he won the ‘Chip’ for the 8-year-old division. Moreover, he became the MVP and even made the All-Star team. Ryker began playing basketball at the age of 2, and he mainly practiced with his dad.

Similarly, Ryker also plays tennis, football, and other sports. Talking about Reggie Miller’s daughter, Lennox is also interested in sports like soccer. Her mom once uploaded a photo of her and captioned it, saying she is officially a soccer mom.

Ryker and Lennox’s mom and dad seem to support them. Thus, whatever sports they play professionally, their parents will help them wholeheartedly. Let’s hope Reggie Miller’s children have a successful future.

The name Ryker has an American origin, and it means Becoming Rich.

Similarly, the name Lennox means From Levenach, Scotland, and it has a Scottish origin.