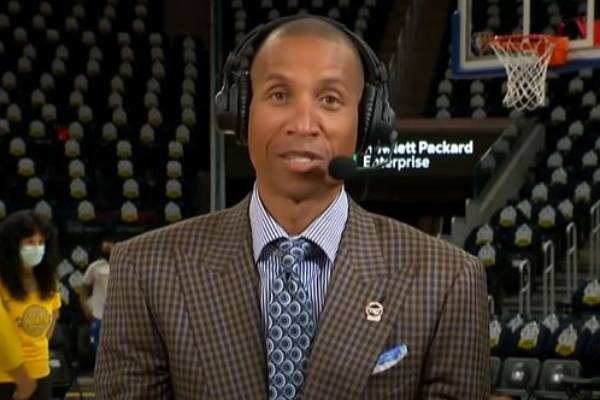 The NBA history has seen many successful players who have not only gained fame throughout their playing career but also after their playing careers have gotten over. Their exemplary playing skills have helped them gain significant fortune and success. One such player that is considered one of the greatest players of all time is Reggie Miller.

Reggie Miller spent 18 years playing professionally for the Indiana Pacers of the National Basketball Association. He has garnered several awards and titles and immense fame. But, how much has the talented player earned to his name? What are his earning sources, and even after his playing career is over, how was he able to earn millions?

Thus, in this article, let’s learn in detail about Reggie Miller’s net worth and his earning details.

Reggie Miller Net Worth And Earnings

As mentioned earlier, Reggie Miller played in the NBA for 18 years, and there’s no doubt that he has amassed a tremendous fortune to his name. According to The Richest, the successful former NBA player Reggie Miller’s net worth is estimated to be $90 million. Similarly, Celebrity Net Worth reports that he has a fortune worth $80 million.

Whatever might be the amount, the player seems to have amassed multi-million dollars worth fortune to his name. Well, we talked about how much he has amassed, but how did he accumulate such immense wealth? So now, let’s talk about his earning sources.

Not many know, but Reggie Miller comes from an athletic family. His brother, Darrell Miller, is a former MLB player, his sister, Cheryl Miller, is a Hall of Fame basketball player, and his younger sister, Tammy Miller, played volleyball at Cal State Fullerton. He played collegiate basketball for the basketball team of the University of California, UCLA Bruins. During his college career, Miller held many individual game records.

In 1987, the Indiana Pacers selected him with the 11th pick in the first round of the NBA draft. Since then, he played with the Pacers until May 2005. In 18 years of his playing career, he earned $105 million in salary alone. The table below shows the breakdown of Miller’s salary while playing with the Pacers, as per HoopsHype.

In 1996, he had signed four years contract with the Pacers which was worth $9,000,000. Reggie Miller played 1,389 games in total and won many of them. Because of the extraordinary playing skills that he showed in 18 years of his playing career, he has a huge fan base in America and worldwide.

Moreover, during his last game in 2005, he received a standing ovation from the crowd. Reggie Miller is also the third-highest 3-point shooter in the NBA

Miller will always be regarded as one of the greatest players of all time who played for the Pacers. Even after retiring, the successful player continued to be involved in basketball sports.

Salary As An NBA Commentator

After retiring, in August 2005, Reggie expressed about joining TNT as an NBA analyst. Well, as per his plans, he currently serves as an NBA commentator for TNT. In addition, according to HeraldWeekly, Reggie Miller’s salary as a sportscaster is $250,000 per year. Thus, he has been earning significantly from his job, which will eventually increase his net worth.

Similarly, Reggie once guest-hosted Live with Regis and Kelly. He also provides commentary for The Dan Patrick Show on ESPN Radio weekly. Moreover, he also worked for the NCAA Division I Men’s Basketball Championship as an analyst in  2011.

From all these works, he must have earned considerably. Thus, Reggie Miller’s net worth of $90 million seems considerable.

Income From Movies And Television Shows

Similarly, Reggie has also produced the movie Beautiful Ohio and the television series documentary 30 for 30. Thus, he must have earned significantly from the works mentioned above.

Besides being a successful and talented basketball player, he is also a cyclist. In 2001, during the NBA off-season, he got his first taste of mountain biking. Since 2010, Reggie began participating in different MTB races and has entered many XC/Endurance races every year. In December 2020, he was appointed to USA Cycling’s Board of Directors along with Brendan Quirk, Lucia Deng, and Ed Ewing.

Reggie participates in different races and collaborates with different brands for cycling gear and equipment. For example, he and Team Boombaby has teamed with Castelli Cycling to release several jerseys and kits. The profits from the sold jerseys and kits are donated to different organizations.

For example, they recently released the “Say Their Names” jersey in order to address racial and economic injustice. The jersey costs $99.99, and its profits were donated to a 501 C3 organization, Equal Justice Initiative.

Besides Castelli Cycling, Reggie has collaborated with many other brands. He must have raised quite a good sum of money that he has donated to several organizations and causes.

As mentioned earlier, Reggie Miller’s net worth is estimated to be $90 million. And with such a multi-million dollars worth of fortune that he has amassed to his name, there’s no doubt that he lives a comfortable lifestyle. Well, yes, he lives a luxurious life with his partner Laura Laskowski and three kids; among them, two are Lennox Miller and Ryker Miller. Moreover, he must be paying taxes regularly.

In 1995, Reggie purchased a home in Los Angeles for $1.1 million with his ex-wife, Marita Stavrou. The house with 7,000 square feet of living space was built in Mediterranean style and is located on the Sunset Strip in Hollywood Hills. Moreover, he also owns another home in Fishers, Indiana. He had once listed the house for sale for $7.5 million. However, he did not find any buyer, so he took it off the market.

Similarly, in 2001, Reggie bought a home for $5.3 million in Malibu, California. In addition, he had a house on Geist Reservoir near the Hamilton County community of Fishers. The house that was located just northeast of Indianapolis had a worth of $1 million. Sadly, the property went up in flames in May 1997. Several valuable items were ruined, and some of them were missing, which indicated the sign of burglary. The fire’s price tag was estimated to be $2 million, which also included possessions.

According to The Richest, the house’s value at the time of sale in 2014 was $4,500,000. Therefore, he must have made a significant profit from the house sales. In addition, he must have a great car collection and have made a good insurance policy for his cars.

As Reggie is still very active in his job, there’s no doubt that he will be earning more in the future. Thus, there will likely be an increment in Reggie Miller’s net worth in the future.