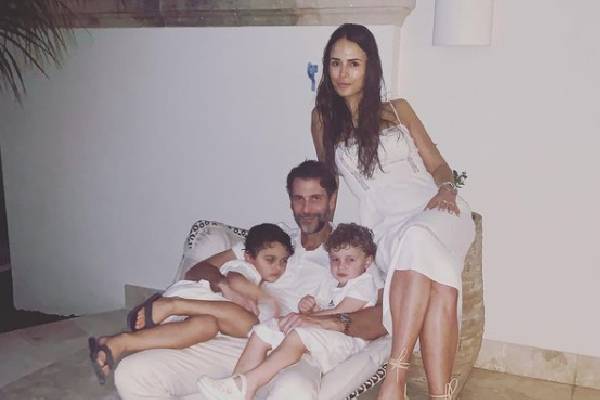 Jordana Brewster is a celebrated American actress and model. She is noted for her role as Mia Toretto in the popular film The Fast and the Furious. The gorgeous actress has also appeared in several movies, music videos, and television series in her career. Moreover, her other films include The Texas Chainsaw Massacre: The Beginning, Fast Five, and many more.

Talking about the personal life of Jordana Brewster, she is a family person. However, everyone must have known that she was once a married person and a doting mother of two children, with her ex-husband, Andrew Form. And the cute baby boy Rowan Brewster-Form is one among two of Jordana Brewster’s children.

Here, meet Jordana Brewster’s son Rowan Brewster-Form and get to know about him and his whereabouts.

Youngest Child Of Jordana Brewster With Her Ex-husband, Andrew Form

The raven-haired beauty Jordana Brewster married American film producer Andrew Form in a private ceremony. The ex-couple exchanged their marital vows in May 2007.

Aforementioned, Jordana is a blessed mother to two beautiful kids. Besides her eldest son Julian Brewster-Form, she also has a son named Rowan Brewster-Form.

The Fast and Furious actress, Jordana Brewster, welcomed their second child on June 8, 2016, with her ex-partner, Andrew Form. Jordana also describes her younger son Rowan as mellow so far, a lot more like his father, Andrew. Jordana, the proud and overwhelmed mother, posts photos of her little ones on her social media handles. The post follows an impressive number of good wishes for the babies and the family.

Has An Elder Brother

The youngest child in the family is loved and adored comparatively more than the Elder ones. Rowan Brewster-Form is also the youngest member of the family. The little one has a big brother, Julian Brewster-Form, born after six years of their parent’s marriage in September 2013. As mentioned earlier, Jordana and Andrew’s son, Julian, could not enjoy the privilege of being the only loving child in the family. Rowan was born three years after his big brother’s birth.

The Brewster-Form brothers love and enjoy spending time with each other. The photos of Jordana Brewster’s son, Julian, and Rowan, can be seen on their parent’s media sites. After the arrival of two kids, Jordana and her former husband seem to be enjoying parenting.

Rowan Was Born Via Gestational Surrogacy

As we know, The beautiful actress Jordana, and her ex-lover, Andrew Form, welcomed both their kids via gestational surrogacy. In this process, the embryo is created through IVF, using the eggs and sperm of the intended parents, and is transferred to the surrogate.

The beautiful actress, Jordana Brewster, opened up about the ex-pair’s decision to go with gestational surrogacy in 2015. She also talked about being judged by people after going through the process of surrogacy. However, she didn’t have any options left other than disclosing information about their kid’s birth via surrogacy, as she could not get pregnant herself.

The Fast and Furious actress Jordana really did change after her first child, Julian’s birth. She got involved in No Kid Hungry. From then she made sure that her kids are getting proper nutrition. She is also involved with Alliance Of Moms, where mothers like Jordana are given knowledge about their child’s proper diet and brain development. The actress also talked about the advantage of having the entire family members around you and helping you to maintain a balance between work and home. Jordana Brewster’s sons never have to feel lonely when their parents are away because their relatives’ love always surrounds them.

Although she is parenting her child perfectly with the support of her former partner, Andrew Form, Jordana sometimes feels a little left out. She feels the loss of not being able to experience the birth of their child. The actress chooses to stay away from the judgy moms who consider surrogacy not applicable in society.

As stated earlier, Rowan Brewster-Form’s parents enjoyed their marital life for more than one decade. However, things could not run smoothly between the ex-lovers, and they separated.

The ex-pair first met on a horror movie set that Andrew himself produced, and Jordana was the actress. Although Jordana had said that she will never move in with someone before getting married, but could not keep her words. By the end of 2005, after the filming wrapped, Jordana moved into Form’s Hollywood Hills home. Rowan’s dad Andrew proposed to the gorgeous actress Jordana Brewster on their first anniversary with a 3.2-carat emerald-cut diamond and platinum ring. Later the two ex-lovers got engaged in a private ceremony.

However, happiness in their family lasted only for a decade, and Jordana filed for divorce in 2020. During their togetherness, the ex-pair had added several properties to their assets, which might be divided after the divorce’s finalization. During their divorce case proceedings, both of them can make a huge demand on the alimony.

The actress Jordana Brewster has moved ahead in her life and is presently dating businessman Mason Morfit. The actress and her present lover can be seen together on her social media sites. On the other hand, there is no information about Andrew, whether he has moved on with his life or not. Yet, he respects his kid’s mother.

The caring father of Rowan Brewster-Form, Andrew Form, is an American film producer. He is noted for his production in the films Friday the 13th, Teenage Mutant Ninja Turtles, The Purge, and many more. Besides, he was also the co-founder of Platinum Dunes, an American production company created in November 2001. Later, he also started another film production company, Fully Formed Entertainment, after an amicable split from Platinum Dunes.

The famous film producer, Andrew Form, also adores his sons. He loves spending time with them despite his busy schedules. After the separation, the two ex-pair seems to spend much more time with their offsprings, co-parenting them. Moreover, both the father-sons duo loves chilling with one another. We can not step back from assuming how amazing their father Andrew must be as he’s a wonderful father to his son.

Even though Jordana and Andrew separated after their thirteen years of conjugal life, they have remained committed to co-parenting their two children as a team. According to People, they also have the utmost respect for each other even after filing for divorce.

Jordana Brewster’s kid, Rowan, is growing up well surrounded by loving people. Similarly, the child is raised in pleased family background and will possibly grow up to become a successful person. Rowan is almost five and is having the best childhood with his brother and amazing parents. The youngest in the Brewster-Form household is also seen spending quality time with his grandparents and his aunt, Isabella Brewster. Although Jordana could not be the super chill mom, she is a self-proclaimed neurotic parent.

There is no doubt that the little one lives a comfortable life in his home in Los Angeles with his loving mother and brother. His father, Andrew, must also be frequently visiting the house. The actress has an estimated net worth of $25 million fortune; Jordana Brewster must be giving her kids a comfortable lifestyle.

We can all hope to see the Brewster-Form boys living a happy life with their parents together in the future.

The name ‘Rowan’ is derived from English origin, which means little red-haired one.