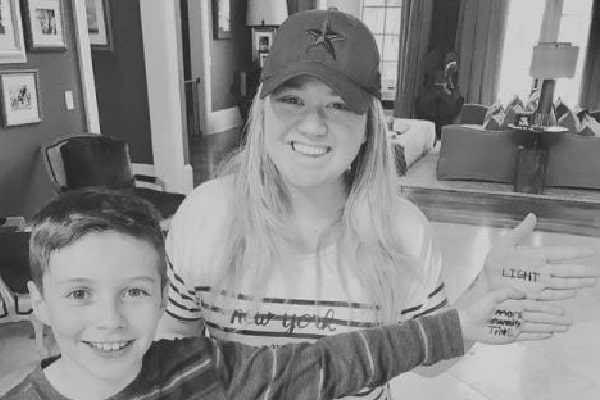 Seth is one of the two children of Brandon Blackstock with his ex-wife Melissa Ashworth. The former couple welcomed their second child into this world on November 21, 2006.

Seth has one elder sibling named Savannah Blackstock. To follow, he has even two more half-siblings, River Rose Blackstock and Remington Alexander Blackstock. Both of them are younger than Seth and are very close to him. The bond between Brandon Blackstock’s son Seth and his half-siblings is not something that we might have expected, but it’s one of the rare realities. One of the reasons behind it might be that his mother was resilient enough to move on and adore Brandon-Kelly as a couple.

No doubt, Seth is as forgiving and resilient as his mother, Melissa.

Seth Lives With His Father And His Step Mom

As aforementioned, Seth is resilient and adaptive. Currently, he lives with his father, Brandon Blackstock, and his stepmom, Kelly Clarkson. Even after the fact that Kelly is his stepmom, he is pretty close to her. In fact, he is on a good term with Kelly and adores his younger siblings.

In addition to that, Kelly does not hesitate to share some snaps of the three siblings: Seth, River Rose, and Remington, having some fun time. Seth’s big sister, Savannah, also loves all of her three siblings, but she remains quite busy with horse riding.

Seth Has A Strong Bond With His Step-Mom, Kelly Clarkson

On the other hand, Kelly also loves him and Savannah as much as her children. They have an incredible bond that might shock many of us. Back in 2013, just after the marriage of Brandon and Kelly, Kelly got to experience motherhood through Seth and Savannah, as she didn’t have her own children at that time. This period has always left an impression in her life and is the reason why she loves Seth so much.

Not only this, one of the moments that exhibit their strong bond is when Seth came out to sing and dance with Kelly Clarkson in one of her shows in 2015. They sang and danced to a cover of Mark Ronson‘s “Uptown Funk,” along with Kelly’s backup singers.

Seth Is A Big Fan Of Ariana Grande

Although Seth’s name is not usually in the limelight, he gets to meet a lot of celebrities due to the connection of his stepmom, Kelly Clarkson. He has been fortunate enough to meet with his favorite celebs, and one of them is Ariana Grande.

Seth is a big fan of Ariana Grande. This was disclosed by Kelly in one of her Instagram posts captioned as:

“Thank you so much @arianagrande for meeting my kiddos! You are very sweet and so is your crew! #sethlovesyou He will be talking about this for years ha!”

So by this, we can see how much fun Brandon Blackstock’s son Seth is having with his life.

The name ‘Seth‘ is a name of Hebrew origin that means ‘Anointed, compensation.’ Seth is also considered to be the third son of Adam and Eve.