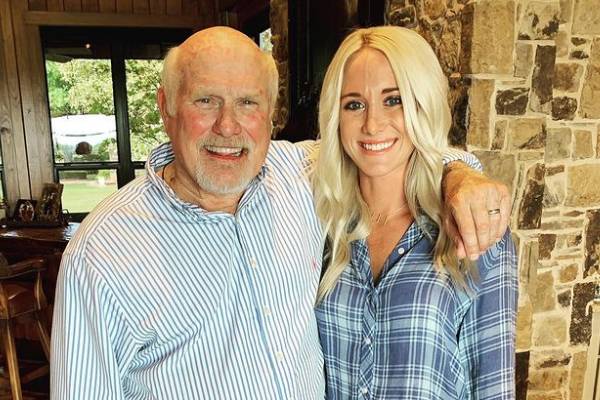 Terry Bradshaw, a former professional football quarterback who played for the Pittsburgh Steelers in the National Football League, is well-known. Moreover, his work as a television sports commentator and co-host of Fox NFL Sunday has also received widespread media attention.

While many football fans are familiar with Bradshaw’s professional life, his personal life has become a hot topic of conversation. Furthermore, his marriage to four different women has caused quite a stir in the media. Additionally, people are also interested in learning more about his children’s whereabouts.

So, in this article, we’ll get to know Terry Bradshaw’s daughter Erin Bradshaw and see what she’s been up to lately.

Erin Bradshaw was born in 1989 to Charlotte Hopkins, an attorney, and Terry Bradshaw, a former NFL player. Erin was born in West Lake, Texas, and raised alongside her elder sister Rachel Bradshaw.

Bradshaw’s elder sister, Rachel, is a singer-songwriter who has written songs including “Wild Horse,” “Aphrodite,” and “What Makes Christmas.” She is also a part of the Stella/James country music band. Rachel has co-written several successful songs, including Fireflies, Highway, and Redflag.

However, Bradshaw’s parents divorced in 1999 after nearly 16 years of marriage. Rachel Bradshaw’s mother has remained silent on the subject. Terry, on the other hand, has admitted that he struggled to recover after the divorce and even suffered from anxiety attacks.

Erin has a close relationship with both of her parents. In addition, Terry Bradshaw’s daughter, along with her stepmother Tammy Bradshaw and step sister Lacey Hester, frequently appears on her father’s show, The Bradshaw Bunch.

So, we wish the Bradshaw family the best and hope that they keep enjoying their time together as time passes.

Terry Bradshaw’s daughter graduated from the University of North Texas with a bachelor’s degree in Fashion Marketing. She went on to become an American Paint Horse Association and American Quarter Horse Association exhibitor following graduation.

At present, Erin works as an equestrian, a professional horse rider with extensive experience. And according to her Instagram, she is a World Champion Equestrian. Additionally, Bradshaw’s baby girl has won numerous races, championships, and awards with her horse, John Smith.

Moreover, Erin won her sixth Amateur Senior Western Pleasure at PHA World Champions in 2019. Nonetheless, she still has a long road ahead, so Erin will undoubtedly go on to build a significantly prominent name for herself.

Is Married and Expecting A Baby

Scott Weiss and Erin Bradshaw married in a Milestone-Morgan Creek Barn in Aubrey, Texas, on May 6, 2017. Scott, like Erin, is an equestrian and the owner of Scott Weiss Horses, a company that raises and trains horses for championships. The couple has now been married for approximately four years.

Furthermore, in an exclusive sneak peek film from The Bradshaw Bunch, Terry Bradshaw’s daughter said that she and Scott were having “a new addition to their family” with her parents and sibling. While everyone was expecting Erin to mention a baby, Scott brings out a dog. The entire family is surprised at the prospect of the puppy becoming their new addition.

However, the couple brings out another dog, who happens to be wearing a “Big Brother” baby bib. While most of Bradshaw’s family picks up on the clue and celebrates, her father, Terry, remains clueless. Nonetheless, Erin hands him a sign that reads “Baby Weiss arriving December 2021” and includes a sonogram photo.

Terry has expressed his desire multiple times for additional grandchildren in the past, so it’s no wonder that he was ecstatic. Similarly, Bradshaw’s siblings and family members joined in the cries of delight at the news. So we can only imagine how much Erin and her family will cherish the baby girl once she arrives in the world.

Originating from Irish culture, Erin is a female name that means peace and is derived from the word ‘eire.’