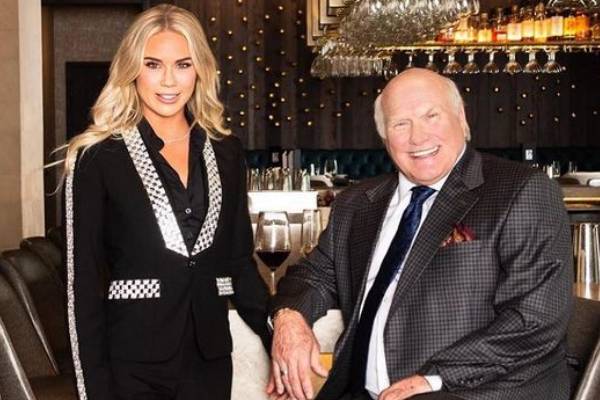 Celebrity children are exposed to the media from an early age, and some of them utilize the media exposure to their advantage to get a head start in their careers. And one such example is Terry Bradshaw‘s daughter, Rachel Bradshaw.

Rachel is a celebrity kid who has used her fame to establish a successful singing career, winning awards for her songs. Moreover, she is also an entertainment personality and appears on The Bradshaw Bunch with her family. So naturally, many are eager to find out more about the superstar.

So, in this article, let us look at what Rachel has been up to at the moment. Moreover, let us find out if she has found a new lover after losing her first husband in an accident.

Is Close To Her Family

Rachel Bradshaw was born to former NFL player Terry Bradshaw and attorney Charlotte Hopkins on May 13, 1987. Rachel was born and raised in West Lake, Texas, alongside her younger sister Erin Bradshaw.

However, Bradshaw’s parents divorced in 1999 after nearly 16 years of marriage. The reason for Terry and Charlotte’s separation is not public information, and Rachel’s mother has avoided talking about their divorce altogether. On the other hand, Terry has revealed that he had a hard time bouncing back from his third failed marriage.

Terry Bradshaw’s daughter is close to her mother, whose Instagram feed is packed with the Bradshaw sisters’ pictures. The proud mother is often complimenting and applauding Rachel on her accomplishments. Moreover, Bradshaw is also close to her mother’s current spouse Rick Hagen.

Similarly, Rachel is also close to her father and frequently appears on The Bradshaw Bunch. The father-daughter seems to be at ease with one other. Terry even offers his daughter dating tips as well as his harsh opinions on the boys his daughter goes out with.

Additionally, Bradshaw’s daughter is also close to Tammy Bradshaw, Terry’s current wife, and can be seen together in the show.

Terry Bradshaw’s Daughter Is A Singer/Songwriter

The apples didn’t fall far from the tree, and his daughter, like Terry, has discovered a love for singing and songwriting. Nonetheless, while the former NFL player chooses to sing as a hobby, Rachel has turned her passion for singing into a full-fledged career.

Furthermore, Rachel also collaborated with Jerrod Niemann on the song What Do You Want, which was eventually certified gold. She also performed the song on Jay Leno’s Tonight Show.

Additionally, Rachel is also a well-known member of Stella // James, a country music band. The group has produced numerous hit songs such as Fireflies, Highway, Redflag, etc. Moreover, she has also released several singles, including Wild Horse, Aphrodite, and What Makes Christmas, which have received widespread acclaim.

Furthermore, the singer has also appeared in numerous television shows and documentaries, including Celebrity Family Feud, Celebrity Game Face, and A Football Life.

Nonetheless, Terry’s daughter has a long way to go and a strong desire to succeed. So we can expect Rachel to produce many more songs in the future.

Rachel married James Robert Douglas Bironas, aka Rob Bironas, a former American football placekicker for the Tennessee Titans, in June 2014. The couple was having a beautiful time making future plans and enjoying their time together.

Unfortunately, destiny had another plan for them. The pair had been married only three months when Bironas died on September 20, 2014. Bradshaw’s daughter has not talked much about her husband’s death in public, but we can infer that she was heartbroken by his loss.

Death is inevitable, and the agony of losing a loved one can be excruciating. However, the saddest aspect of death is not dying but what happens to those left behind. So, the pain Terry Bradshaw’s daughter must have suffered three months after their wedding when her husband died an untimely death is unimaginable.

Rob Bironas spent most of his professional career with the Tennessee Titans and was one of the NFL’s most accurate kickers. However, at the height of his career, Bironas was killed in a single-vehicle wreck when he slammed into a row of trees after losing control of his 2009 GMC Yukon Denali. The news of Bironas’ passing must have been shocking for his family and friends.

However, Rachel was the one who suffered the weight of his death the most. Bradshaw’s daughter even quit music and returned to Texas to cope with the loss of her spouse. Nonetheless, her father, Terry, was always by her side, helping her get back on her feet. It must have been reassuring to have someone to lean on during such a difficult situation.

Still, at present, Bradshaw’s daughter appears to have moved on and is even enjoying her dating life.

Has Moved On With A New Partner

We have to give props to Rachel Bradshaw for not giving up on love despite having had such a heartbreaking experience in the past. However, It’s easy to argue that Terry Bradshaw’s daughter has had terrible luck regarding romances.

Rachel has been linked to several men in the past. And her relationship with her ex-boyfriend Dustin Hughes was on display for all to see. As a result, we all watched as their relationship crumbled on air.

The former pair were engaged and set to marry. While Rachel was love-stricken by Dustin, none of her family members were sure of Hughes’ intentions with her.

Furthermore, it was revealed in one of The Bradshaw Show’s episodes that Dustin was having a child with another lady with whom he allegedly cheated on Rachel. After that, the couple swiftly broke up, and Bradshaw’s daughter subsequently revealed that she felt the two of them were getting serious while her ex-boyfriend was playing games with her.

Despite this, she continued to go on dates and improve her love life while on the show and even went on a picnic date with Connor Saeli, a contestant on The Bachelorette’s 15th season. Although the date was enjoyable, nothing came of it, and the two quickly moved on with their lives.

Following this, rumors began to circulate that Rachel was dating country musician Matt Stell. However, neither Rachel nor Matt has addressed the rumors. Still, on September 30, 2021, Rachel revealed that she was no longer single. But she wants to keep the relationship quiet for the time being and will eventually reveal her partner.

Well, let’s hope that it will not be long before we find out who Rachel Bradshaw’s boyfriend is.