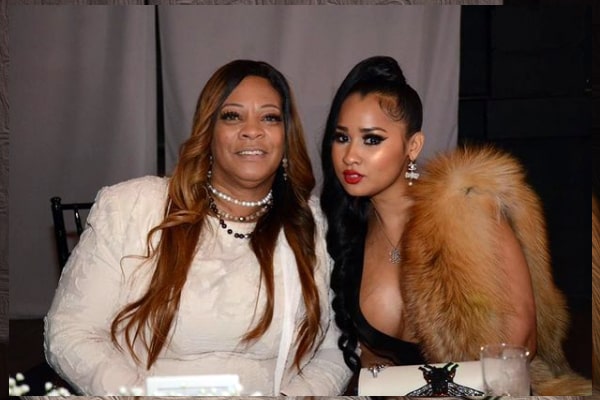 Waka Flocka Flame's Mother Debra Antney is an American businesswoman who handles a massive talent agency all by herself. Image Source: Debra's Instagram.

It is no secret that Waka Flocka Flame was born to a successful woman behind many famous artists, Debra Antney. A mother, mentor, and philanthropist are very few identities of Flame’s mom.

Therefore, here are seven facts about Debra Antney and her whereabouts. She’s fascinating, and a few sad moments failed to refrain her from gaining the position she is in today. Thus, enjoy.

Waka Flocka Flame’s mother, Debra Antney, is as successful as her son. In fact, it was her who helped Waka launch his career. The wonder woman is the CEO of Mizay Entertainment and has worked for several notable names in the Hip Hop world.

Furthermore, the Atlanta-based talent management firm that was launched in 2007 described it as a ‘Pit Bull in a skirt.” Moreover, she demanded equality in the male-dominated industry, proving herself as a major power player.

As a result, Debra has managed several artists, including Gucci Mane. Moreover, she also helped establish careers of the hottest names in the pop music industry, including Nicki Minaj, French Montana, OJ Da Juiceman, and her son, Waka Flocka.

Besides working with several notable names in the hip-hop/rap/pop culture, Waka Flocka Flame’s mother, Debra, also launched Be100 Radio, the online radio station for independent artists. Moreover, the Radio is well-respected because of its variety in music, comedy, shows, etc.

Besides running a talent management agency, Debra also produced and starred in two reality shows. She acted as an executive producer for Waka & Tammy: What the Flocka and Growing Up Hip Hop: Atlanta.

Furthermore, Debra also appeared on six episodes of tv series documentary Hip Hop Uncovered in 2021. Likewise, according to her IMDb, she had credits for Lost in Traplanta as a guest.

Moreover, Antney has also appeared in her own production, Growing Up Hip Hop: Atlanta, Love & Hip Hop: Atlanta, Chrissy & Mr. Jones, etc. Thus, she’s not only busy making stars; she is a star in the making herself.

As mentioned earlier, Waka Flocka’s mother is a very hard worker. Therefore, Debra Antney’s net worth has escalated to $10 million, thanks to her rigorous, complex works and dedication throughout the decade.

Furthermore, the American music manager overcame a rough childhood in Jamaica in which she was forced to sell drugs and serve as a lookout for her drug addict father. However, she refused to get succumbed to the drug dealing circle. Hence, Debra became one of hip-hop’s most prominent music managers ever.

The average salary of an American music manager is $53,502 per year, and the top earners might as well make $89,500 annually. Therefore, as a founder and CEO of her talent management agency, Debra makes a handsome sum of money. And as for her son, Waka Flocka Flame has an estimated net worth of $7 million.

Besides having a thriving career, Debra Antney is a proud mother of four kids.

Aforementioned, Debra Antney is not just a successful business executive. She is also a doting mother of four beautiful kids.

Although Waka Flame’s mother preferred to keep her relationship chronicles away from the media, she could not hide the talent of her kids and the tragedy that broke a heart of a mother either.

Debra gave birth to Juaquin James Malphurs, aka Waka Flocka, Kayo Redd, Tyquam Alexander, and Rahleek Malphurs, with her partners, whose names are yet to be disclosed.

Moreover, Debra and Waka were involved in a terrible car accident in July 2019. She further posted the pictured of the crushed car on her Instagram and let her 832K followers about the accident.

Debra also gave away the detail about the accident claiming her car flipped four times and thanked God for keeping her, RahRah, and Kayo safe. Although the three survived, Debra is no stranger to tragedy.

Unfortunately, Debra’s son, Kayo Redd, died in 2013 in an apparent suicide. Likewise, she’d previously lost a son in a car accident when Waka was only 14.

Despite tragic events, Debra has grown wiser and more faithful. Thus, she did not hesitate to pressure her son, Waka, to have kids.

Deb Antney, Waka Flocka’s protective mother, had no issue pressuring her son to have kids on his WE-TV reality show, What the Flocka.

Regular on the show, Waka and Tammy, Waka resisted Debra’s advice saying he was still in the first quarter of his life at age 33. Moreover, during an interview, Debra said that he’d be a great father and revealed that she knew his son wanted to be a father.

Waka’s mom also added that he’s a GEMINI. So Debra believes that what he said on tv is not ‘necessarily’ how he ‘really’ feels. She further noted that Waka is already a good stepfather to his partner, Tammy Rivera‘s daughter.

Deb also noted that Tammy has full family support, and after grandkid, she’d be able to focus on her career. Besides living near to her son and establishing a healthy relationship with her kids, she loves to hoard stuff and probably won’t run out of groceries any time soon. That reminds us, Debra is a huge Trump admirer.

Debra Thinks Donald Trump Is Not A Controlled Individual

During an interview with Big Facts with DJ Scream and Big Bank, the business mogul Debra Antney cleared the air about her admiration for Former President Donald Trump.

Debra clarified that she isn’t in love with him but prefers him over his contenders. She further added that she’d vote for neither of them and even if she had to, it’d be Trump ’cause he’s the lesser ‘evil.’

Waka Flocka’s mother further added that she’s a realist and likes Donald because he doesn’t sugarcoat anything. She also insisted that Trump is not a controlled individual and loves him because you cannot control him.

Debra shared her deep compassion for the parents of those who were wrongfully murdered in response to differences in Trump’s response toward the killing of Black people compared to white.

Having her own political opinion, Debra and her son, Waka, is very familiar with lawsuits.

Although Debra is known for her loyalty towards her clients, the Atlanta-based rapper Gucci Mane or Radric Delantic Davis was not impressed. As a result, he sued Debra and her son, Waka Flocka Flame.

Furthermore, the complaint referred to events during Davis’ 2009 stint in the Fulton County Jail. It further claims that Deb took control of the company. And, along with Malphurs and Stone, spawned three separate companies without Davis’ consent.

Moreover, the allegations claimed that Antney stole a ring and necklace from Davis, seized control of his money and assets & used them for her benefits. Finally, there is a long list of accusations, including that the group withheld the payments and royalties.

Regardless of the conflict and tragic events and power struggle to stand equal at the male-dominated hierarchy of the music industry, Waka Flocka Flame’s mother, Debra Antney, remained adamant and grew strong. Therefore, we shall hear more of her magic in both the musical and philanthropic worlds.