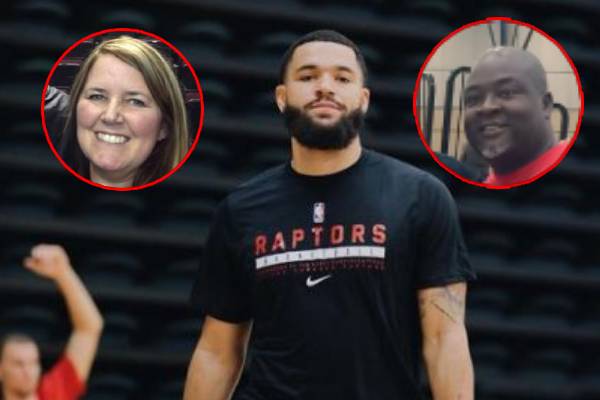 Fred VanVleet is a popular basketball player currently playing for the Toronto Raptors. He currently plays as a point guard and completed his college career at Wichita State University. He has gained worldwide prominence because of his exemplary playing skills.

Fred VanVleet is the youngest son of Susan VanVleet and Fred Manning. Because of his fame, his parents, too, have come into the limelight. So, in this article, let’s know about Fred VanVleet’s parents.

His Dad Was Killed

In 1999, Fred’s father, Fred Manning, was shot and killed due to his involvement with drug dealing in their hometown of Rockford, Illinois. VanVleet was only five years old when his father had an untimely death.

It must have been difficult for the family but Fred VanVleet’s mother, Susan VanVleet raised him and his brother as a single mom. Later, in one show, Fred’s mama revealed that raising two biracial African American children as a Caucasian mom in Rockford was extremely difficult due to its existing racism.

Fred VanVleet shared about his dad’s death on NBA media day in September 2017. He revealed how the gun violence and run-ins with police had shaped their views on the wave of activism.

As stated above, Fred VanVleet lost his dad in 1999 and his mama raised him and his brother single-handedly. It must have been extremely difficult for the family to make ends meet.

Three years later, Fred VanVleet’s mom, Susan, met a policeman, Joe Danforth. The couple was introduced at an AAU tournament, where Joe was coaching against Susan’s son’s team. The pair began dating, and within a year, Susan and her two kids moved into Joe’s home on the west side of Rockford.

Susan and Joe raised four kids together, his two sons and her two baby boys. The couple eventually got married on May 23, 2015. The duo has two children together, a son and a daughter. They all are close to each other.

Fred’s mom, Susan Danforth, often tweets several pictures of her family. They all seem to have a great bonding with each other. Moreover, Fred is also close with all of them.

Credits His Stepdad For His Successful Basketball Career

Fred VanVleet’s stepfather, Joe, is a police officer who spent six years in the army. He was strict and disciplined his children, which proved crucial for their development.

Joe used to make VanVleet wake up at 5:30 am in the morning and run ramps and flights of stairs at the YMCA parking lot. He did not want his stepson to follow the path of his biological dad.

Fred VanVleet’s parents would provide money for him and his siblings to take a trip with their AAU team, regardless of having credit card debt. Although they were better off financially, they still couldn’t afford to send their children to college. Hence, the couple knew basketball was their ticket.

Joe coached Fred and the other three children on their AAU squad and even worked as an assistant at Auburn. His hard work has undoubtedly paid off as VanVleet has achieved significant success in his basketball journey.

Fred’s stepdad and mom are very proud of his achievements. When he became an NBA All-Star in February 2022, his parents revealed they cried and screamed. In an interview, Joe shared how he was not confident due to some of the politics linked to the sport.

Nevertheless, the NBA player is very close with his stepbrothers, half-siblings, and stepdad. He often spends several holidays together with them. Similarly, Susan and Joe adore their grandchildren, Sanaa Marie VanVleet and Fred VanVleet Jr. They also must be close with Fred VanVleet’s fiancee Shontai Neal.

So, let’s wish the VanVleet-Danforth family more happiness in the days ahead.