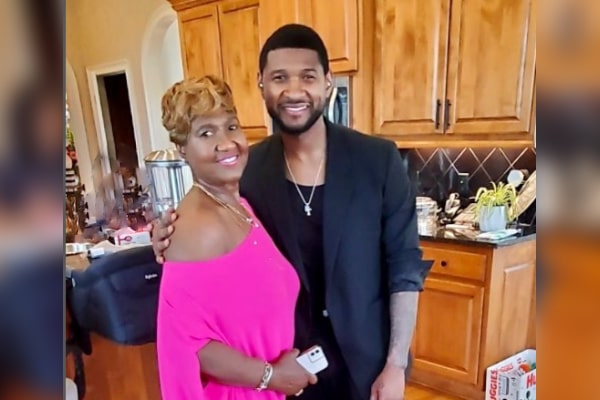 Eight-time Grammy winner Usher Raymond IV simply Usher is one of the most successful singers, songwriters, and businessmen in America. With his second album, My Way, Raymond IV shot up to fame. Ever since then, he has garnered immense fame and fortune in the music industry.

The Dallas native was born to his mom, Jonnetta Patton, and his dad, Usher Raymond III. Did you know Usher’s mother was his manager at the early stages of his career? Thus, let’s get to know the doting mama of the musician in today’s article.

Was A Long-time Manager Of Her Son

During the early days of her son’s musical career, Patton realized that she needed to do something for his budding music profession. As such, she decided to become a momager. But Jonnetta realized she needed power when it came to her son’s business moves. Hence, she started off by buying her first office space and making it an avenue to make calls for their business.

Furthermore, the beautiful lady revealed that back then, the music industry executives felt that mothers who were managers could not separate business from their parental love. But, Patton knew how to separate. After some time, the talented businesswoman bought her own building and started to run JPat Management. There was a dance studio, recording studio, wardrobe rooms, office spaces, and an administrative office.

That was indeed a smart business move. Usher’s mother said she no longer needed to ask where her son’s rehearsal would be as she was in charge of taking care of that. In addition, Jonnetta also made pretty pennies.

After several years, Usher and Patton ended their professional relationship in 2007. The mother-son duo reunited again in 2008 but separated again. The Caught Up singer revealed that he ended his professional bond with his momager because he wanted to explore his creativity.

Her Son Once Said: You Destroyed My Life

Usher’s mother managed his career to superstardom. However, once, the singer blasted his mom over his career. The acclaimed musician started his career as a teenager. At that time, he pursued mama Patton to let him join a local singing group to perform around venues in Atlanta. The group even recorded music and peddled it in the streets.

But, Jonnetta didn’t like that system. On top of that, she didn’t know where the profits were going. So, she asked her little boy’s manager for financial records, however, that guy never showed them. Thus, the songwriter’s mother pulled him out from the group just when they were about to go on tour, followed by landing a record deal.

The incident crushed the little Usher, who poured his anger and said his mom destroyed his life. He also accused Jonnetta of taking everything from him by trying to stop him from succeeding and going after his dreams. Later on, both settled down their issues, and the rest is history. Although Jonnetta is no longer manager of her son, he credits her for his success.

Usher’s Mother Is Now An Entrepreneur

After resigning as Usher’s manager, Jonnetta Patton got an opportunity to explore and launch new businesses. Eventually, in 2016, the talented woman opened J’s Kitchen Culinary Incubator (JKCI) in her hometown, Atlanta. It is a commercial shared kitchen. It is in the building that she used for her music business for nearly three decades.

Moreover, J’s kitchen offers excellent culinary incubation to food entrepreneurs, such as certified chefs, bakers, mobile food services, and specialty food producers. The former manager shared that her mission is to help other entrepreneurs establish ownership in a sustainable business. Furthermore, the beautiful lady has combined her love of food with her decades of business experience.

Jonnetta Patton’s net worth must be a considerable sum, as the CEO and owner of her company. On the other hand, Usher’s net worth is $180 million, which he primarily garnered from his musical career. Looking at their fortune, both mom and son must be enjoying a lavish lifestyle.

Is A Proud Mother To Her Kids

Talking about the entrepreneur’s personal life, she was married to Usher Raymond III for a few years. They welcomed their son, Usher Raymond IV, before ending their relationship due to Usher III’s drug addiction. Sadly, Jonnetta Patton’s ex-husband died on 18 January 2008 during a liver transplant at an Atlanta hospital.

Furthermore, Jonnetta tied the knot with Johnny Lackey, with whom she gave birth to their son, Jack Lackey, in 1984. Additionally, the My Way hitmaker and his half-brother share a close bond. As per IMDb, Patton was also married to Terry Patton from 1981 to 1990. So, are both guys the same person?

Overall, from managing her son’s career to forming her own business, Patton has done well. She is now enjoying her life with her children and grandchildren. Nevertheless, we wish mama Patton more success in her career ahead.