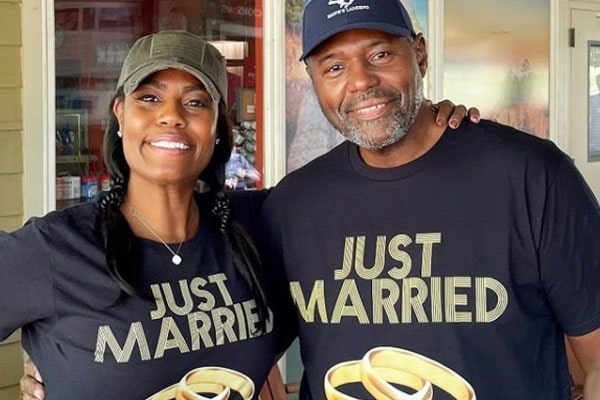 John Allen Newman is the husband of Omarosa since 2017. Image Source: Omarosa's Instagram.

Omarosa aka Omarosa Manigault Newman probably might not need much introduction as she often makes headlines because of her career as a reality TV star and her involvement in politics. But, mainly, she is famous as the former political assistant to the former U.S. President, Donald Trump. And those who are well-updated about her life must be familiar with the fact that she is currently in a marital relationship with a democrat pastor, John Allen Newman.

So, who is Omarosa’s husband, John Allen Newman, whom we often see accompanying her on various events? Let’s be familiar with some fascinating facts about him and know him better.

John Allen Newman exchanged the wedding vows with Omarosa on 8 April 2017 at Trump International Hotel in Washington D.C. Omarosa announced the happy news on her Twitter with a photo of herself in a pale pink wedding gown and with a caption ‘Just Married!’ Moreover, in the picture, she was holding Newman’s hand, who looked stunning in a brown suit with a matching pink tie.

Omarosa’s marriage with Mr. Newman is her second one. Before him, she was tied in a marital knot with her college sweetheart, Aaron Stallworth. The former pair married in 2000 and eventually ended their marriage in 2005. Besides, Omarosa was also secretly engaged to the late actor Michael Clarke Duncan.

Talking about Omarosa’s husband, John Allen Newman, he was also in a marital bond with Andrea Newman. Though the details of their relationship are still out of reach of the media, they divorced only after having some kids. But, sadly, how many kids does Newman have from his first marriage is also unknown to the public.

As reported by Newsweek, Omarosa met John Allen Newman while she was teaching at Howard University. Soon after that, the two fell for each other and starting dating, followed by an engagement in 2016. According to sources, Newman popped the question to his love, Omarosa, with a 5-carat diamond engagement ring. He proposed to his to-be-wife in front of his congregation at The Sanctuary at Mt. Calvary in Jacksonville.

After getting engaged to John Allen, the former queen of reality TV, Omarosa showed her custom engagement ring off to People. She called it spectacular and magnificent. Newman had got it designed by his friend, an Atlanta-based jeweler.

Furthermore, Allen Newman and Omarosa took nearly a whole year to plan their wedding after their engagement. Though they had fixed 25 March 2017 for their wedding, due to some threatening calls, emails, and messages, they postponed it to 8 April. Nevertheless, the pair’s big day went well, and both are happy with their relationship.

A Senior Pastor At The Jacksonville-based Baptist Church

Omarosa’s husband, as mentioned earlier, is a pastor. He is the senior pastor at the Jacksonville, Florida-based Sanctuary of Mt. Calvary Baptist Church. As noted by Omarosa during a talk with People, it is actually something she and her man have in common.

Omarosa was an assistant pastor at Los Angeles-based Weller Street Baptist Church. According to CBS Los Angeles, she gave her last sermon in February 2017 to join the Trump Campaign as director of African-American Outreach.

The current husband of Omarosa, John Allen Newman, is a Democrat who served on Jesse Jackson‘s presidential campaign from 1984 to 1988. Also, he worked on former President Barack Obama‘s 2008 campaign.

During Obama’s presidency, Newman stayed in close contact with members of the White House staff. Also, he attended the press conference with senior staffers and with President Obama.

Keeping Politics Aside To Make His Relationship With Omarosa Work

Back in 2016, Omarosa said that her relationship with her husband, John, could be troublesome due to their political differences. She said that they are a unique political couple in the United States in the sense that they are literally on as far ends of the spectrum as one can possibly get. So, Omarosa and her spouse came to a conclusion to find a way to balance politics and their relationship.

According to Omarosa, she and Newman make their relationship work by putting politics separate. She explained that their love for each other transcends all political parties, views, and stances. They do not always agree on political issues but do agree to support each other.

So, Omarosa and her husband, John Allen Newman, are rejoicing their marital bond with full support, love, and care for one another. Though Omarosa suffered several heartbreaks in the past, it seems like she has finally found her soulmate, who will be with her till eternity.

Hence, we hope you might have learned a lot about Omarosa’s husband, John Allen Newman. If you feel like we missed some information about him, feel free to let us know.