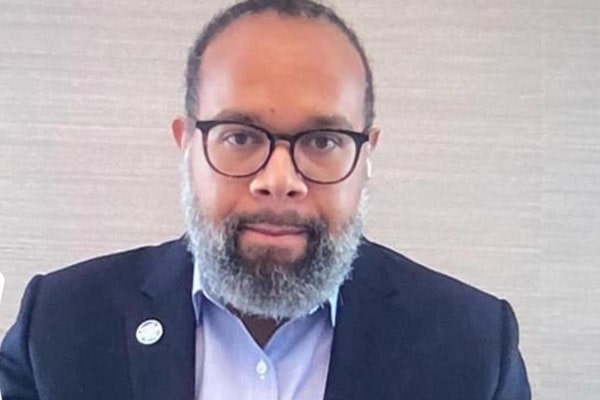 The former assistant to the former US President, Donald Trump, Omarosa Manigault Newman, often recognized by mononym Omarosa, married twice in her lifetime. Currently wedded to a democrat pastor, John Allen Newman, Omarosa had previously tied the knot with an educator, Aaron Stallworth. They married in 2000 and eventually separated after five years in 2005.

So, where is the former reality TV star Omarosa’s ex-husband, Aaron Stallworth, at the moment? Let’s find it out here, along with some of his personal and professional facts.

Married To Omarosa For Five Years

Aaron Stallworth exchanged the wedding vows with Omarosa in 2000. But, sadly, the details on their marriage, including the venue, the exact date, and the attendees of their wedding day, are not available for the public. But, we hope it was a grand one, and all of their close ones were present on their big day.

Everything went right between Stallworth and Omarosa for some years. But, gradually, things started getting messy in their happy married life. As a result, the then-husband-wife-duo decided to split and eventually got divorced in 2005.

During a talk with the People magazine, Omarosa said that she separated from Stallworth at the beginning of 2005 but kept it secret. She added that she was not as supportive of her then-husband as she could have been. When she was working on several projects in L.A., Stallworth was home on the ranch in Texas. So, both of them decided to go in different directions.

Though Aaron Stallworth and Omarosa officially called an end to their marriage in 2005, they vowed to be close to each other. Soon after the divorce, Omarosa said that Stallworth was her college sweetheart and would always be the love of her life. May their bonding as close friends remain strong till eternity.

After his divorce in 2005, Omarosa’s ex-husband, Aaron Stallworth, stayed mute concerning his personal life. However, going through his Instagram bio and other sources, we came to know that he is a devoted husband and a father. According to Stallworth’s profile on Hope Investment Group‘s website, he is a father to two wonderful daughters with his current wife.

Furthermore, while Aaron moved on in his life with another lady after divorce, his famous ex-wife, Omarosa, also soon started dating other men. She dated Dr. Frank Ryan and Michael E. Misick for a while in the past. Also, Omarosa secretly got engaged to the late actor Michael Clarke Duncan.

However, in the present, Omarosa is happily living her life as pastor John Allen Newman’s wife. Newman proposed to Omarosa in July 2016 after dating for less than a year. Finally, they tied the knot in April 2017 at Trump Hotel in D.C. and have been enjoying their time as husband and wife ever since.

A Senior Relationship Manager At UNCF

Omarosa’s ex-husband, Aaron Stallworth, currently works at UNCF as a Senior Relationship Manager of the Gates Millennium Scholars Program. He joined UNCF in February 2016 and made a positive impression on his seniors with his hard work and leadership skills.

Before joining UNCF, Aaron Stallworth did various jobs to sharpen his knowledge and skills. One of his first professions was as an Algebra teacher at Maya Angelou Public Charter School from 1999 to 2002. Similarly, Aaron was the Director at Youth Enrichment Seminars (YES) from 2002 to 2005.

Then, according to Stallworth’s Linkedin page, he served as the Dean of Students at See Forever Foundation for a while. Some other positions handled by Aaron in the past include the post of Counselor at KIPP DC and a Clinical Counselor at See Forever Foundation. Before starting his work at UNCF, Stallworth also managed the Director of College Counseling position at E.L. Haynes Public Charter School.

So, currently, Aaron Stallworth works on Bill Gates and Melida Gates‘ foundation’s program, the Gates Millennium program. But, since 2018, the program has been running under the name Bill Gates Scholarships for minorities.

Omarosa’s ex-husband, Aaron Stallworth, was born in Texas’ Fort Worth, grew up in Marshall, and spent his adult years in Washington DC. Growing up, he attended the University of North Texas’ Texas Academy of Math and Science from 1993 to 1994. Later, he joined Alabama Agricultural and Mechanical University, from where he graduated with a Bachelor of Science and Business Management.

Furthermore, Aaron Stallworth is also one of the hosts and producers of The Dap Project, LLC, a podcast dedicated to black men. Besides, he is a keen lover of music, mainly hip-hop and jazz, and thus, he loves to call himself an audiophile.

So, Aaron Stallworth is currently doing great as a person, a family man, and an employee at UNCF. We expect to hear more about his whereabouts in the days to come.