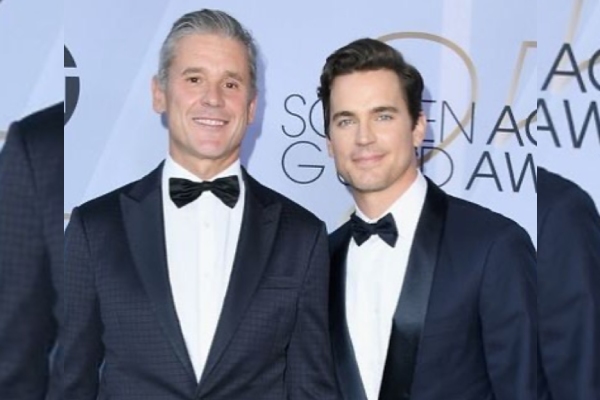 Matt Bomer, born Matthew Staton Bomer, is an American actor who made his debut through All My Children, a soap opera. The Carnegie Mellon University graduate made his big-screen debut through the mystery thriller Flightplan and continued to gain success through movies like In Time, Magic Mike, Winter’s Tale, The Nice Guy, etc. Not only commercial success, but Matt Bomer has also been able to add the Primetime Emmy Award to his shelf. He received the accolades for playing a closeted New York Times writer in the television drama film The Normal Heart.

There is so much more to his professional journey and success, but now let’s talk about his personal life. Very few things were known about his personal life until he revealed his marriage with Simon Halls. This big reveal got huge media coverage and is still one of the hot topics. You might have so many questions about Matt Bomer’s gay partner, and this article is an answer to it. Here are 7 facts about Matt Bomer’s husband Simon Halls, with whom the actor has been married for almost a decade.

First comes the biggest and the most known fact about Matt Bomer’s partner, Simon Halls, he is a successful Hollywood publicist. As of now, he is a partner at Slate PR. Slate PR has its offices in New York and Los Angeles. Before this, he, along with his business partners, had formed PMK/HBH Public Relations, and Halls had served as the Co-CEO of the company for almost fourteen years. Apart from this, Matt Bomer’s husband Simon Halls is on the Board of Advisors for the USC Annenberg Center for Public Relations.

Simon Halls Is From Canada

Unlike Matt Bomer, his husband, Simon Halls, is from Canada. Halls was born in Toronto, a city in Canada, on January 12, 1964. Not much has been revealed about his parents and siblings. However, his upbringing must have been fantastic, seeing the success he tasted and how he handles himself. Also, Halls’s family might have been supportive of him when he came out as gay.

Even though the information about his childhood remains hidden, one known fact about him is that he graduated from Cresent School, which is a private school in Ontario, Canada. After graduating from school, he got enrolled in North Toronto Collegiate Institute. Then Matt Bomer’s husband, Simon, moved to the USA to pursue his higher education at the University of Southern California.

Simon Halls And Matt Bomer Got Married In 2011

After moving to the United States, Simon met actor Matt Bomer and eventually fell in love. The couple tied their marital knot in 2011 in a small ceremony attended by a handful of close friends and family. While they were very much in love and happy with their lives, the couple kept their relationship hidden until 2014.

Actor Matt Bomer revealed the news about his wedding with publicist Simon Halls during his acceptance speech after receiving a humanitarian award from the Desert AIDS Project. During the speech, Matt thanked his husband for supporting him and also revealed the names of their sons. The admission came as a huge surprise for Bomer’s fans; however, they were very supportive of the married couple.

Halls Has Three Children With Bomer

This family of five spends a lot of time together – which can be seen through Matt Bomer’s Instagram handle. Though both of Matt and Simon’s professions require them to be away from the house, their sons are a priority for both of them. As a result, Bomer’s three children, with his husband, are growing up well. It seems like the couple has set an example of great parenting.

Halls And Bomer Do Not Work Together

As aforementioned, Halls is the co-owner of a Public Relations company. So you must be thinking that Halls have worked for Bomer throughout these years. But in contrast to what one might expect, the couple has separate career trajectories as they do not want to bring professional work into their personal life.

That is why, despite being one of the most powerful publicists in Hollywood, Halls has never represented his husband. However, he has worked with many famous names in Hollywood, including Jude Law, The Coen Brothers, Sarah Jessica Parker, and Annette Bening.

Halls Had Started His Career With Warner Bros

Moreover, after graduating from the University of Southern California, Simon Halls started working with Warner Bros, a multinational entertainment and mass media conglomerate. Halls worked in the publicity department there. Later, he moved to Russia as he landed the job of PR Manager for the first McDonald‘s Restaurant there.

After working in Russia for two years, he returned to the United States and reentered the entertainment world. He secured the position of account manager at BWR Public Relations. Since then, Matt Bomer’s husband Simon Halls has established PR agencies and worked with several high-profile clients. He is now the go-to PR man for many actors, showing that Halls has gained immense success from his career.

Matt Bomer And Simon Halls Are Worth Over $10 Million.

As one might expect, the celebrity couple has a massive net worth. Their combined net worth is estimated to stand above the mark of $10 million. Although the exact details about the wealth accumulated by Simon Halls are yet to be revealed, it’s certainly in millions. The net worth of Simon’s husband, Matt Bomer, is estimated to be $9 million. Matt has earned this huge fortune through his acting career and continues to add more to it.

As of now, Matt Bomer and Simon Halls have been married for almost a decade, but the love between them seems to have grown deeper day by day. They are currently living a comfortable life with their three sons.