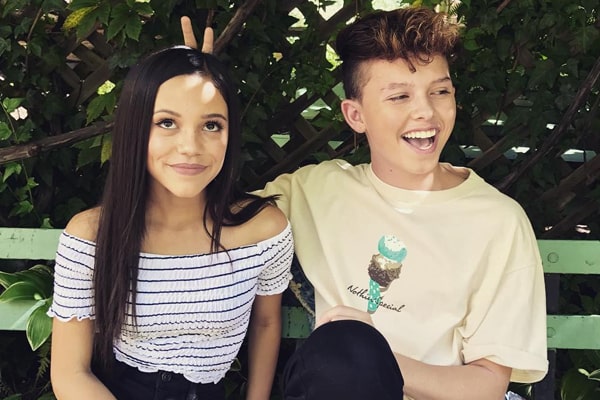 Jacob and Jenna Ortega were rumored to be together briefly. Image Source: Pinterest.

Disney has welcomed some incredibly talented young teen artists and the Internet is a great place to exhibit young talent. Among the gifted teens are Jacob Sartorius and Jenna Ortega. The duo is seen together in Jacob Sartorius’s music video Chapstick. Since then, the on-screen couple was shipped very strongly. However, they never addressed the rumors publicly.

It would have been great to see them together. But can a music video, a couple of cuddly pictures and do silence prove Jacob Sartorius and Jenna Ortega are dating? Or were they just excellent friends and were having fun? Let’s find out.

How Did The Rumors Spark?

Back in 2017, Jacob tweeted that he had a crush on someone, and in a Q&A video, he confessed that he couldn’t reveal the girl but loved Disney Channel’s Stuck In The Middle, which happened to be Jenna Ortega’s show. He began posting cute, cuddly pictures of them together, which led his fans to speculate if they were more than friends.

More confusion began after Jacob Sartorius‘s music video, ‘Chapstick’, was launched where Jacob and Jenna explored New York together and, in the end, nearly kissed for the screen. To which, fans’ dopamine rushed, and they began shipping the on-screen couple. However, both of them remained silent, leaving their fans more curious about the relationship between them.

Shutting Down The Rumors

Jacob and Jenna managed to fool their fans with their short music video and cute compliments they passed on one another. However, it looks like all of us were just hyped by seeing the lovely activities they did together and friendly emojis. According to J-14, the Sweatshirt singer and Stuck in the Middle actress were good friends. He told J-14 they had good chemistry on camera as well as off the set.

Well, there it goes, everything was for Jacob’s music video, and they were just good friends. We fans used just a tiny bit more of brain cells seeing adorable cuddlings on screen.

Furthermore, the 17-year-old actress, Jenna Ortega was also linked with Annie LeBlanc‘s boyfriend, Angel Asher in 2018. The rumor began when they co-ordinated Haloween custom as Ariana Grande and her former fiance, Pete Davidson. But she shut off the rumors in a podcast “Just Between Us.”

In conclusion, we got to know that Jacob Sartorius and Jenna Ortega are nothing more than great friends. Skater singer, Jacob however, dated Stranger Things’ Millie Bobby Brown shortly. Their dating rumors sparked in 2017 when Brown posted a picture of Jacob as Insta’s story and had been flirting since. However, the couple couldn’t last long and announced their separation via their Instagram stories.

According to People, the couple told that the decision was mutual, had no hard feelings, and would remain good friends. On the other hand, Jenna has maintained silence about her dating life. Despite being rumored with artists like Angel, she hasn’t been dating anyone exclusively. So it may take a while to find out who Jenna Ortega’s s boyfriend is.

As of now, the rumored couple is utterly focused on their career. Both Jacob and Jenna are working hard on succeeding in the competitive entertainment industry.