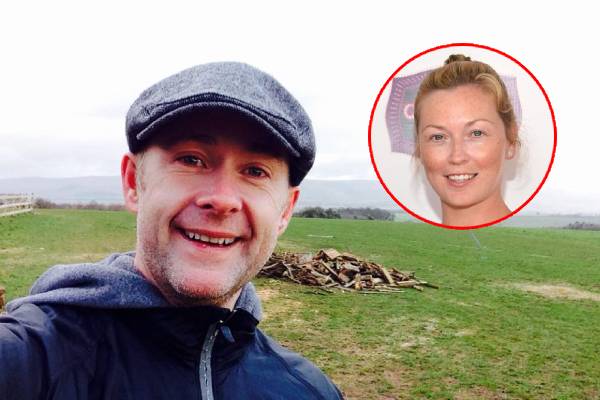 Hailing from Scotland, William Nathan Boyd is famous for playing the role of Pippin in the Lord of the Rings trilogy. He is one of the few Hollywood actors who has had tremendous success on small and big screens. Some of Billy Boyd‘s well-known works include Master and Commander: The Far Side of the World, Seed of Chucky, and Outlander. Additionally, the actor also fronts a band that goes by the name Beecake.

There’s no denying Billy’s professional career has been an enormous success. Likewise, his personal life is going smoothly. The Hobbits actor is in a blissful marriage and has a son. However, the Hollywood couple prefers to keep their private lives hidden from the public eye. As a result, the public is in the dark about their love life and personal affairs.

Thus, in this article, let’s learn in detail about Billy Boyd’s wife, Alison McKinnon, and their marital life.

Billy Boyd and Allison McKinnon first met at a British winter musical comedy theater in 2002. Although when the two began dating is unknown, Billy and Ali had been together for several years before they married. According to the actor, there was no big decision not to marry; they just kept saying they would.

Finally, on December 29, 2010, the couple exchanged wedding rings in an intimate ceremony at Glasgow’s Oran Mor. Billy’s Lord of the Rings co-stars Elijah Wood and Dominic Monaghan were among the few guests invited to their private wedding.

Billy and his sweetheart have also kept their love life very private, like their wedding. Unlike other couples who publicly display their affection on social media, Billy Boyd’s wife prefers to avoid it entirely. Likewise, the actor appears to understand his partner’s desire to avoid the spotlight. As a result, he does not post any pictures of her on his social media accounts.

Having said that, Ali has previously accompanied her partner hand-in-hand to award ceremonies. In addition, the couple has now been married for over a decade. So, it is safe to assume that their marital life is going well even if they do not feel the need to publicly flaunt their love to their admirers.

So, let us all send our best wishes to Billy Boyd’s partner and her family.

Billy Boyd’s Wife Is A Mother Of One

As mentioned above, the actor is also a father of one. Billy Boyd’s then-girlfriend welcomed their son Jack William Boyd on April 26, 2006. According to sources, The Lord of The Rings actor took to his website to announce that he was proud of his son and his now-wife.

Following his birth, the couple kept their son out of the spotlight, so details about his upbringing are unknown. Nonetheless, given Billy’s high regard for family, we can assume that he and his partner raised their child with love and affection.

Billy also frequently shares pictures of their kid on his Instagram account. Looking at the photographs, it is clear that Boyd and McKinnon’s son appears to be in excellent health and spending quality time with his family.

Moreover, Alison McKinnon’s son travels everywhere with his family. So. despite the actor and his wife’s hectic schedule, they have done everything possible to ensure their child receives the necessary care and attention from them.

For now, let us wish Billy Boyd’s spouse and their son well and hope that we get to hear from them in the coming days.

It is no secret that Billy Boyd’s wife was familiar with theatrical plays and acting. Naturally, her admirers anticipated that she would soon appear in television shows and movies. So, when Billy Boyd’s then-girlfriend appeared in the television short Instant Credit, it is safe to say that people were ecstatic to watch the celebrity wife.

In 2010, Billy stated that his partner works as a yoga instructor and ballet dancer. However, most of her works remain a secret as she keeps a low profile. Likewise, whether or not Alison still serves as a yoga instructer is unknown owing to her private way of living.

Regardless, we wish Boyd’s spouse the best for her future endeavors and hope that she finds success in all of her pursuits.