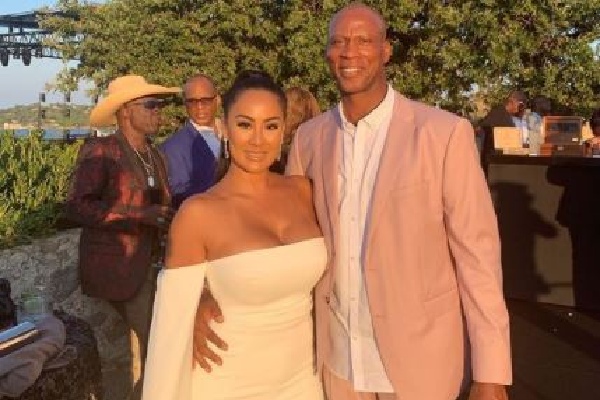 Byron Scott is a professional American basketball coach serving the Los Angeles Lakers. He is also a retired American basketball player who has won three NBA titles while he was in the LA Lakers in the eighties. With time, his playing career transformed into coaching, and he has been equally successful in it.

Talking about his personal life, Byron has been married twice: once with his ex-wife Anita Scott and then with his current wife, Cecilia Gutierrez. In this article, we will try to bring his personal life to light. So read this article to meet and learn about Byron Scott’s wife Cecilia Gutierrez, whom he married after his divorce from ex-wife Anita Scott.

As aforementioned, Cecilia Gutierrez is the second and the current wife of NBA coach Byron Scott.  Cece is also known for starring in the reality show called the ‘Basketball Wives.’ She’s got more popularity after getting married to Byron amidst this pandemic. If you don’t know about this new bride, it’s time to know her.

Cecilia Gutierrez was born on April 26, 1972, which makes her 48 years old now. She was born to Edith Gutierrez (mother) and Reynaldo Gutierrez (father). She and her brother have acquired Filipino ethnicity from their parents. Her brother is a Muay Thai enthusiast and is a DJ who goes by the name DJ Jace. Her mother is a soprano vocalist, but not much is known about her father. Cecilia seems to have a very close bond with her family. She also has a son from her previous love affair, but she has kept his identification under a veil.

The three-time NBA champion Byron Scott and Basketball Wives star CeCe Gutierrez got married amidst the pandemic in July 2020. Their initial plan was also altered due to the virus. The couple had an intimate ceremony that was broadcasted live for friends and family to watch.

The couple also shared some pictures of their special day on their social media platform. CeCe is a reality show star while also being a nurse, while Byron is a former NBA coach. CeCe was also thankful for her mother Edith Gutierrez and brother Jay Gutierrez who sang their first wedding song and second wedding song respectively. Overall, Byron and CeCe had an amazing wedding even though they had to change it due to the pandemic.

Yes, many people don’t like Cecilia Gutierrez. The list starts with her stepson, Thomas Scott, and step daughter-in-law, Kristen Scott, and never goes on. Kristen is also a cast member of the Basketball Wives. Continue reading to know why they don’t like her.

First of all, during the 7th season of the reality show, she publicly told her father-in-law that he wasn’t a very good grandfather. Every time she becomes angry with her in-laws, she makes private information public. Once, she revealed that Thomas was not even the biological child of Byron. This shocked everyone, and that’s when the clash between Cecilia, Thomas, and Kristen started. Cecilia and Byron did not even invite their son and daughter in law on their big day.

ALSO READ: Lloyd Pierce’s Wife Melissa Ghoston, With Whom He Had A Sunshine Themed Wedding

What Does Byron Scott’s Wife Cece Do?

This is probably the only thing that shows her positive side. Cece is a full-time registered nurse. She studied Nursing Science at Marymount College for two years before attending LA County+ USC Medical School of Nursing for another two years. And finally, in 2000, she completed her bachelor’s degree in Science of Nursing from the University of Phoenix.

She has worked in a trauma hospital and Rejuvenation Center. At some point in time, she had even opened her medical spa. Well, looking at her endeavors, one can expect Cecilia Gutierrez’s net worth to be around $2 million.

Byron was married to his ex-wife Anita till 2014. The couple also has two children Thomas Scott and LonDen Scott. After spending almost three decades together, the couple set their ways apart in an unprecedented fashion. During their divorce, many speculated that Byron was cheating on Anita with CeCe Gutierrez, but there has not been solid evidence.

Anita is now set to join the show Basketball Wives, where it is expected by fans that truth will come out. There is no doubt that the other ladies will try to find out why she called it quits with the former basketball player.

Howbeit, we wish Cecilia and Byron a happy married life..