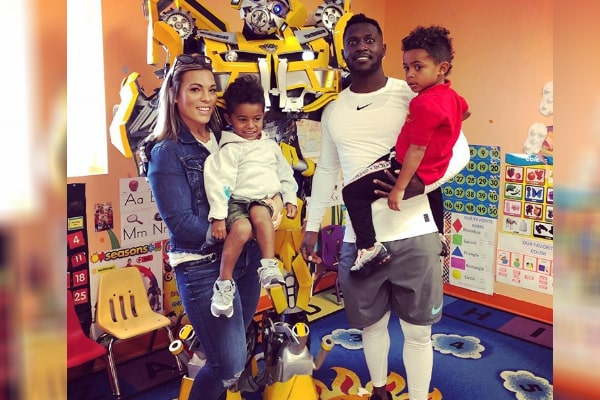 Antonio Brown and his on and off girlfriend, Chelsie Kyriss are finally engaged to be married. Image Source: Kyriss' Instagram.

Antonio Brown is an American football wide receiver who was drafted in 2010. Raised in Miami, he amassed more receptions than any other in the league since his rookie season in 2010 through 2018.

Besides building a successful career with a handful of controversies, Antonio has managed to balance his love life with his on and off girlfriend, Chelsie Kyriss. Well, they have recently announced their engagement and are waiting for more blessings. So, on that note, let’s find out more about Antonio Brown’s fiancee.

Former NFL star, Antonio Brown’s fiancee, Chelsie Kyriss, is a badass woman and a mother. She is exceptionally secretive. Although it seems like everything about Brown’s baby mama is out there, nothing is exclusive.

Chelsie is a cunning woman and understands the way of life. She also gets the extravagant life her man lives and thus lets her man shine secluding herself from the media.

For now, Kyriss is known as Brown’s fiancee and a mother of four. But a thing we are sure of is that Antonio Brown’s on and off girlfriend is active and always thriving for the best.

Chelsie Is Around For A Long Time

Antonio Brown and Chelsie Kyriss have been together for a long time, probably his entire controversial NFL career. She saw him grind, rise, and then fall from the kind of professional he was. Although there is not much about the pair, they were spotted together in multiple accounts.

Furthermore, the pair has four children; Autonomy Brown, Apollo Brown, and Ali Brown, and a daughter they welcomed amidst chaotic pandemic, whom they dearly care about. Interestingly, Antonio Brown’s children have their own Instagram, and they have tons of followers.

Besides having babies and being together, the pair had a few feuds publicly. However, they are together now and are enjoying parenthood all over again.

Antonio Brown is not an ordinary personality. One can imagine how big he is as his blonde mustache gave him a new identity as seal and MEME-makers got work.

Thus, a little conflict between the two lovers ‘shooketh’ the internet within seconds. The NFL star claimed that Kyriss tried to steal one of his cars. He added that he had kicked Chelsie out of the home and demanded her off his property. He claimed that she was allowed on his property so she could take their kids to school.

Well, Antonio even threw a packet of candies (shaped like penises) and screaming her to have a ‘bag of d$$$$.’ and reminded her that ‘driving Bently wasn’t her lifestyle.’

Antonio Brown’s baby mama finally responded to the allegations with utmost patience. She made an Instagram post claiming that she and her kids had moved from their old home, distanced themselves from their dad, and are leading a healthy life. Furthermore, she wished her then-ex-boyfriend, now fiance, to seek some mental help and prayed the best for him.

Wonder how you do that and get your apologies accepted. But well, it’s Antonio Brown, hence, it was possible eventually.

Following the public allegation, Antonio Brown’s partner Chelsie Kyriss sought sole custody of her three sons citing that Antonio continued to demonstrate an incapacity to make decisions that are in the best interest of their kids. The court stated that their kids needed to have shared parental responsibility. Thus, the results were inconclusive.

Brown’s then ex-girlfriend also requested that Brown’s time with their children be supervised.

Brown’s Baby Mama Forgives Him For The Public Feud

It is said that the utmost realization a man does is when they hit their rock bottom, and similar seems to be the case in the troubled NFL star, Antonio Brown.

It took him being cut from two NFL teams, jailed for an alleged burglary and dropped by Nike to reflect on his actions. Hence, he apologized for his public breakdown and the hurt he had caused to his baby mama, Chelsie Kyriss.

Antonio took Instagram to extend his apologies to his baby mama in early 2020. He wrote that he owed her the world’s most enormous apology for his actions and the damage he had caused. Well, better late then never, we guess, eh?

So, the apology was accepted by Brown’s fiance, Chelsie, and they were spotted in the Super Bowl in February. It’s quite amazing how the apology got accepted this smoothly as the police were involved, but their kids could have played a massive role in the reconciliation.

Whatever the case is, they are more than happy now, and Antonio Brown’s girlfriend proved that forgiving is the highest virtue yet again.

Engaged To Be Married

After all the ups and downs Antonio and his baby mama went through, they seem to be ready to up their relationship game. Hence, following their reconciliation in early 2020, Brown proposed Chelsie in March 2020.

Antonio proudly announced their engagement via his Instagram story. He uploaded a video hugging his baby mama and captioned ‘I Just Propose.’ Considering how rocky their relationship was, it shocked his fans but were happy for him as well.

Although Antonio Brown and Chelsie Kyriss are mummed about their wedding plans, their relationship seems to have mended relatively. Let’s hope we get to hear about their extravagant marriage soon and wish them a happy life.