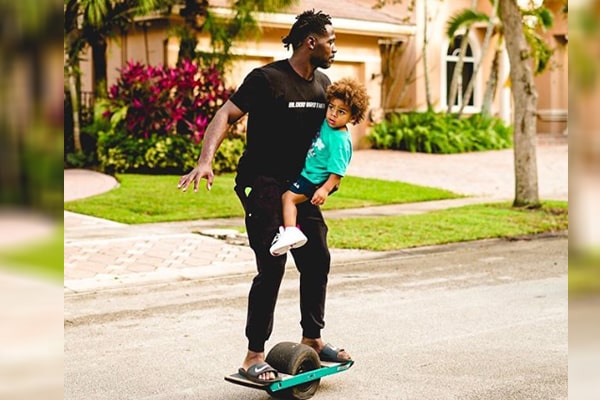 Antonio Brown is notably one of the best receivers in the NFL. Drafted in 2010, he made several records and became one of the highest-paid players in the Oakland Raiders when traded in 2019.

Despite enjoying a glorious career, Antonio Brown’s career was not controversy-free. He was on the constant controversy involving legal issues with his baby mama and sexual misconduct. Despite the rumors, Antonio Brown is a loving father of six. Today, we will be talking about Antonio Brown’s youngest son, Apollo Brown.

Aforementioned, former Steelers star is a father of six; four boys and two girls. On that note, let us point out that Antonio Brown’s son Apollo Brown is the youngest of four sons. Papa Brown welcomed his third son with fiancee/soon to be wife Chelsie Kyriss.

Apollo is a fun kid and is active on Instagram. The three-year-old kid has over 48.1k active followers on Instagram, which is undoubtedly handled by his parents.

Going through Apollo Brown’s Instagram, it looks like he is living the best sharing great bond with his older brothers, Autonomy Brown and Ali Brown. Furthermore, he is very close to his father, and Instagram consists of their little happy moments like brushing teeth.

Although he is only three years old, little Brown seems interested in athletics. The Brown boys are seen hanging out together occasionally and involved in various recreational activities.

Apollo Brown’s Instagram is quite literally a treat to peek into papa Brown’s soft side. Additionally, Antonio Brown is proud of his son’s song, Polluuu, and can’t deny it’s the highlight of his Instagram.

Although Apollo’s father, Antonio Brown, loves him and his siblings with all his might, he surly was involved in some legal issues with his baby mama and fiancee, Chelsie Kyriss.

Now engaged couple was involved in an open feud when NFL star, Antonio, claimed his fiancee tried to steal one of his Bentleys. He further added that he had kicked Chelsie out of the home and demanded her off his property.

Their feud made an exciting turn when Brown decided to throw a back of jellies shaped like little d**** while reminding her that driving Bentleys were not her lifestyle.

A few days following the feud, Brown’s fiancee filed for custody, citing Antonio is illegible of their kids’ custody and that he continued to make decisions that are not in the best interest of their kids.

The judicature stated that their kids were a minor and needed both parents in their lives. Hence, the results were inconclusive. Amusingly,  within a few months, the pair got back together and are engaged to be married now.

Apollo Brown’s dad came into the limelight once again in January 2022 after he erupted in frustration on the visitors. This resulted in the Tampa Bay Buccaneers coach, Bruce Arians, stating that Antonio was no longer part of the team.

This is a long list of troubles that Antonio has invited over the years. But whatever might be his professional troubles, the wide receiver seems to be a good father.

Welcomed A New Member in The Family

Aforementioned, Apollo is not the only child; in fact, he is the fifth of six. Apollo Brown’s parents, Antonio and Chelsie, welcomed their first daughter in July 2020. Although the pregnancy seemed low-key, Antonio announced the arrival of his daughter via Instagram post, where the couple is seen holding their newborn with the brightest smile.

Papa Brown further captioned their picture as ‘Family is all that matters’ with a hashtag Allure, which could be his daughter’s name. Apollo is no longer the youngest child in the family but still the youngest amongst four boys.

Furthermore, Apollo has four more older siblings, Antonio Brown Jr., Antanyiah Brown, Autonomy Brown, and Ali Brown. Apollo’s oldest brother, AB Jr., was born to AB and his ex-girlfriend, Shameika Brailsford. Likewise, he welcomed his first daughter with Wiltrice Jackson. Without a doubt, AB was involved in legal issues with both his baby mamas and somewhat tarnished his reputation.

However, despite their parents’ dispute, all five of Brown kids seem to share a beautiful bond. Let’s hope they continue to share the love, and Apollo grows into being a fine man and outshines his father.

The name Apollo is of Greek origin, which means ‘destroyer.’