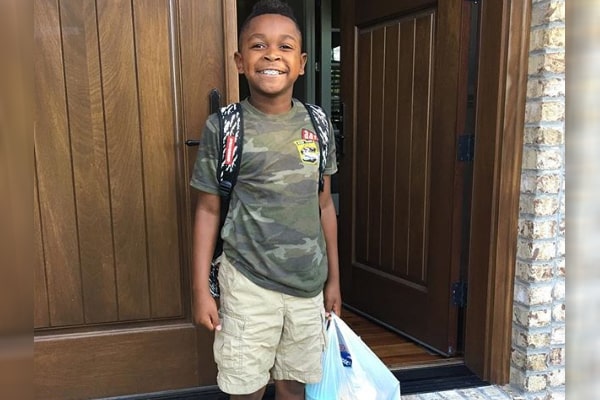 Antonio Brown made a huge name for himself as an American football wide receiver. He is arguably one of the best receivers in the NFL since his draft in 2010. He made history as the only receiver in NFL to record five receptions and at least 50 yards in every game. Brown entertains his fans with his fun touchdown dances and fantastic gaming skills.

Although Antonio Brown’s career is glorious, he did make some headlines with his baby mamas. Father of six by the age of 32, his custody battles, and continuous violent allegations is creating a big dent in his glorious career. Despite that, there is no denial that Antonio is an adoring father. On that note, we will be tailing Antonio Brown’s eldest son, Antonio Brown Jr.

NFL star, Antonio Brown welcomed his eldest son, Antonio Brown Jr., with his baby mama, Shameika Brailsford. The couple parted shortly after, but Antonio Jr. is close to both his parents.

Antonio Brown’s son, Antonio Jr., has a brilliant personality and a beautiful smile. The little kid seems to have a warm aura and is kind to everyone. Furthermore, he is very active on social media with over 85K followers.

Furthermore, Antonio Brown Jr. is as athletic as his father and dreams of beating his dad in football in his late teens. While talking to ESPN on an auspicious day of Father’s day, Antonio Jr talked about how much his dad means to him.

Almost a carbon copy of papa Brown, Antonio Jr has swag since he was a toddler. AB Jr. is a super beautiful human who invites his friends to the games and shares love with everybody.

Let’s hope Antonio Brown Jr. continues to remain warm as he grows, and we get to see him outshine his father Antonio Sr. soon.

Aforementioned, Antonio Brown Jr.’s parents parted ways shortly after welcoming him. Although their priority has always been their son, Antonio and Shameika had some legal issues.

According to TMZ, Antonio Brown’s baby mama, Shameika, claimed Brown took their son and refused to give him back. She further contended that Antonio had custody of their 4-year-old son in Pennsylvania for months while playing with Steelers while exhibiting her concerns.

However, the football wide receiver had denied allegations and claimed Shameika schemed to make a quick buck. His lawyer, Jason Marks, added that Shameika consented to the child living with the wide receiver back in February 2012.

Antonio Brown Jr.’s mother asked the court for an emergency child pick-up order, which would require law enforcement to bring Junior back to her in Florida.

If one thought custody battle is the only beef surrounding Antonio Brown and his baby mama, Brailsford, then BEHOLD! There is more. After the bitter custody battle back in 2012, baby Brown’s mama, Shameika, decided to declare Antonio a deadbeat dad.

In 2017, Shameika was seemingly frustrated by Brown’s absence in their son’s life and attacked him on social media. She posted several screenshots of their conversations where she asked AB to be present in her child’s life.

Bummed with AB’s response, Shameika posted their conversations on social media, claiming he referred to his child as ‘that boy.’ Infuriated, AB posted a few thousand bills of child support payment, which has been deleted since then.

Feuds seem to have ended as AB Jr. appears to celebrate his birthdays with his father and siblings. Moreover, Antonio Sr. looks to balance time as a professional player and daddy. So, despite the feuds, kudos to him as a father if he’s making up for unnecessary headlines.

Along with his legal and online battle with his now-fiancee, Antonio has been embroiled in many controversies. In January 2022, during a game against New York Jets, the NFL player took off his jersey, glove, shirt, and shoulder pads and refused to continue playing.

Later the Tampa Bay Buccaneers coach, Bruce Arians, said that Antonio was no longer part of the team. Whether the wide receiver will continue playing is unknown, but we hope he continues to be a great father to Antonio Brown Jr. and his siblings.

AB is a proud father of six from different baby mamas. AB welcomed his first son, AB Jr., in his early 20s. Antonio Brown Jr has three more half-brothers and a half-sister he adores the most.

AB Jr.’s Instagram is filled with his siblings. AB Jr. is growing up along with his sister, Antanyiah Brown, and brothers, Autonomy Brown, Ali Brown, and Apollo Brown. Additionally, they all inherited their father, Antonio Brown’s athletic abilities, and have warmness in them.

Furthermore, Antonio Brown welcomed his first daughter with fiancee Chelsie. Brown posted a picture of them holding their newborn captioning ‘Family is all that matters’ followed by hashtag, Allure. Fans are hoping that Allure is AB Jr.’s baby sister’s name.

Let’s hope AB continues to grow along with his brother and outshine his father regardless of his career choice.

The name Antonio means highly praiseworthy or priceless and is of Latin origin.