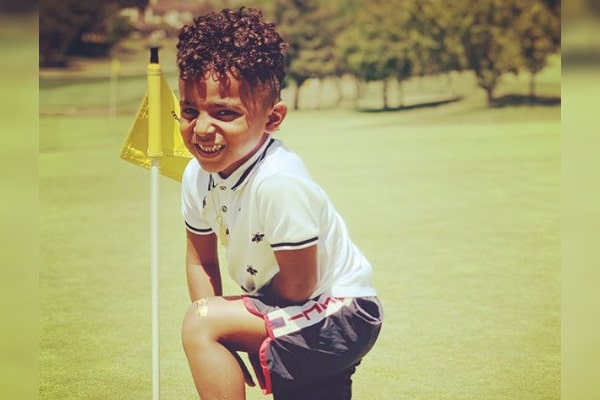 Antonio Brown is potentially one of the best receivers in the NFL. Drafted in 2010, Brown has made considerable leaps in his career. Antonio Brown became the highest-paid receiver when traded to Oakland Raiders in 2019. However, his time in the league was short-lived because of several allegations.

Brown has once again managed to come into the spotlight after receiving an eight-game suspension without pay for multiple violations of the NFL’s conduct policy. Despite his indisputable talent, he’s been dragging his career towards down road because of allegations and open feuds with his baby mama.

However, setting Brown’s career aside, he is a doting father of six and loves his kids despite the heinous allegations. For this instance, we will be tailing one of Brown’s four sons, Ali Brown.

Antonio Brown welcomed his second son, Ali Brown, with his fiancee, Chelsie Kyriss, in 2015. The on-and-off couple was beyond excited to welcome their son and provided almost everything for their child together.

Antonio Brown’s son, Ali, is loved by his parents and vice versa. Papa Brown celebrated his third birthday with a massive bang alongside his brothers.

Antonio Brown’s son, Ali, is off social media, unlike his siblings, older, Autonomy Brown, and younger brother, Apollo Brown. Both Brown’s siblings have a massive fan following on their respective Instagram, while Ali remains away from the public scrutiny. It turns out, Ali is more of a reserved type but loves a good time with his parents and siblings. Hence, his absence on social media is nullified by his siblings’ and parents’ posts.

Furthermore, Ali Brown recently welcomed his baby sister with his parents, Antonio and Chelsie, along with his brothers. Ali is as vibrant as his brother and has a beautiful smile. Let’s hope to see more of the little one in the comings days.

Although Antonio Brown’s son, Ali Brown, is still in his childhood years, he is already setting drills to sharpen his moves. He made headlines after Antonio posted a video of his 4-year-old at the time set up his mini-training camp to hone his skills.

In the Twitter video, he was wearing a full-on Raiders helmet to complete the look as he ran through some cones he had set up. Moreover, Antonio Brown’s son, Ali, was accompanied by Decker, Derek Carr‘s son.

My son Ali only 4 years old setting up his own drills running through em! Baby Decker @derekcarrqb son just dropping dimes like his dad ! What a blessing to see inspire the youth they watch and learn from our every move pic.twitter.com/th2BrPgPAB

It looks like Ali is heavily influenced by his father, Antonio, who is often seen working out or practicing. Furthermore, Antonio had once revealed that his son copies him while he is in the gym and all. So, we can all expect Ali to outshine his father as he will soon be reaching the age when he can showcase his skills.

Although Antonio Brown is not crazy about letting his sons follow him to NFL, will we see Ali in the field with his pads on and victory dances? What do you think?

Aforementioned, Antonio Brown is a doting father of six; four from his fiancee, Chelsie Kyriss, and two from different women he was in a relationship with.

Former Steelers star, Antonio Brown, suffered a significant reputation butchering because of his legal issues with all his baby mamas. Despite the feuds, he maintains a good relationship with all his children and makes time for them.

All five siblings seem to share a good bond as they share one another pictures on their respective social media.

Let’s hope the sibling-love continues, and Ali grows up to become one fine man and outshine his father regardless of his career choice.

Ali is an Arabic name, which means “high,” “elevated,” or “champion.”