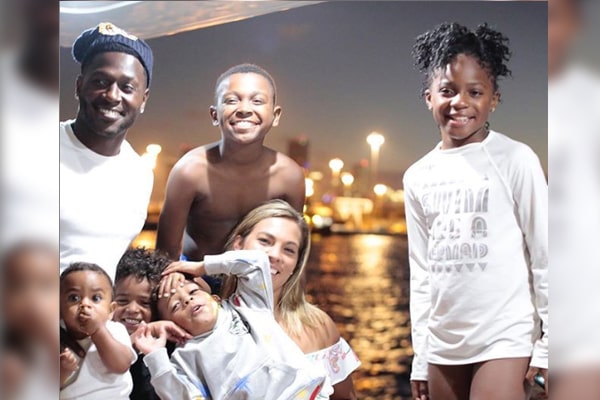 Antonio Brown is an evolving name in the football world. Frankly, he was the highest-paid player when traded to the Oakland Raiders, but his time was short-lived because of several incidents. Later on, he signed with the New England Patriots but was cut after appearing in one game because of the sexual assault allegations.

Today, Brown has come back with all his realizations and learnings from his mistakes. Despite the controversies, Brown is a dotting father and loves his children. He is a father of six at the age of 32. So, let’s meet the NFL star, Antonio Brown’s children and his baby mama.

Aforementioned, Antonio Brown is a proud father of six children. Among them, his youngest three are born from his on and off girlfriend turned fiancee, Chelsie Kyriss.

The beautiful woman welcomed Autonomy, Ali, secretly while AB announced Apollo’s birth in 2017. Brown’s oldest son with Chelsie, Autonomy Brown, has Instagram with over 124k followers. Although his mom handles the account, it is full of fun times the brothers have during their holidays.

Likewise, the mid-child and one of Antonio Brown’s sons Ali Brown is off the social media while the youngest, Apollo Brown, is a superstar garnering 48.2k followers. The three boys seem close to one another at a very young age and seem to share similar smiles.

Likewise, the couple welcomed their first daughter together last week. Antonio announced her birth via Instagram with a caption, ‘Family is all that matters’ with a hashtag, Allure.

Let’s hope they grow up to become as cool as their father, Antonio.

Antonio Does Not Necessarily Want His Children To Play

With sheer perseverance and hard work, Antonio Brown managed to become one of the highest-paid players in the NFL. However, he does not want his boys to follow him to the NFL.

While talking to Steels Wire, he said that the NFL is not what they need to do. Although he wouldn’t discourage them from playing, he would tell the facts of the game, the reality that it’s not healthy. AB further added that hopefully, he earns enough, so his children don’t have to play, and he could see them succeed in other things and support them.

Antonio Brown’s children are young and more so respectful and enthusiastic about their father’s career. They enjoy watching their pa play football and encourage him. Furthermore, Brown’s baby mama, Chelsie posts tons of videos showing her boys watch their father in the field.

Let’s hope Brown’s babies choose their paths on their own and be more supportive of their father’s career in the future.

Moreover, Antonio himself has been embroiled in many controversies throughout his career. In a game against New York Jets in January 2022, Chelsie Kyriss’ partner took off his jersey, glove, shirt, and shoulder pads and refused to continue playing.

This incident led to the Tampa Bay Buccaneers coach, Bruce Arians, saying that Antonio was no longer part of the team. Whether Brown will continue playing is unknown, but we hope he continues to fulfill his duty as a partner and father.

We all know the infamous ruckus Antonio Brown had caused accusing his baby mama, Chelsie Kyriss, of attempting to steal one of his Bentleys. The feud took over the internet as Brown threw a pack of candies shaped like little pee-pee and said ‘F*#* NFL, this is real life.’

Soon after the video went viral, Brown’s fiancee sought sole custody of her kids, claiming Antonio continued to demonstrate an incapable of making decisions in the best interest of their kids. Because the jury stated that the kids were minors and co-parenting was crucial, the results were inconclusive.

Has Two Kids From Previous Relationships

Besides Antonio’s three children with Chelsie, he has two other kids from his previous relationships. However, they are not as exclusive as Autonomy, Ali, and Apollo. Brown always mentions that he has four sons and a daughter and adores them equally.

Antonio Brown’s eldest son, Antonio Brown Jr., is as charismatic as his father and is present on Instagram with 85.9k followers. He was born from Antonio’s relationship with Shameika Brailsford.

Antonio Brown’s son is super close to his brothers, Autonomy, Apollo, and Ali, while adores his half-sister, Antanyiah Brown. She is a young athlete. She runs, she travels, and most importantly, she loves her family. Antanyiah is also active on Instagram with 30.5k followers.

Antanyiah Brown was born to Antonio and Wiltrice Jackson during their relationship. Jackson accused him of domestic conduct in January 2019, claiming that he had pushed her, which led to her falling and hurting her arm. According to Brown’s baby mama, the altercation occurred after she asked him to pay for their daughter’s hair appointment.

Shortly after, Brown sued for sole custody of their daughter, saying that the recent press, in connection with Jackson’s action is jarring for his daughter.

Despite different cases surfaces around Antonio Brown, he keeps his children as his priority. Furthermore, Chelsie seems to be very close to all the kids and is enjoying a great time as a huge family.

Let’s hope everything goes well in Brown’s family in the future, and we get to hear about Antonio and Chelsie’s marriage soon.

Antonio is derived from Latin Antonius which means priceless.

Autonomy means personal independence, while Ali is of Arabic origin which means high or champion. Similarly, Apollo means destroyer and is of Greek origin.