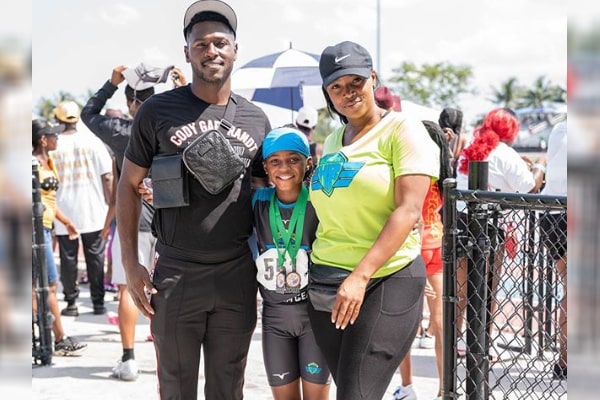 Antonio Brown is famous for his outstanding performance as a wide receiver and infamous for making headlines, and repeated threatening of leaving NFL. Drafted in 2010, he became one of the highest-paid receivers during his brief time in Oakland Raiders in 2019.

Along with his career, he is famous for legal issues with his baby mamas. On that note, we will be discussing one of Brown’s children, his older daughter, Antanyiah Brown. Behold to blow your mind to know how brilliant the little girl is.

Not many may know this but Antonio Brown is a proud father of five and enjoys their company. Although every child is the father’s favorite, Antanyiah especially seems to be a father’s girl.

The wide receiver welcomed his daughter, Antanyiah, with his ex-girlfriend, Wiltrice Jackson. Although the pair went through some tough phases and had a few bitter fights, including the custody battle, both of them prioritize their daughter.

Both Antonio and his baby mama, Wiltrice, make sure that their daughter is well-fed and educated. As of now, Antonio Brown’s daughter is in middle school, making her parents proud of her achievements.

Besides books and tracks, Antanyiah seems to be into rap and even has a YouTube channel with 341 subscribers. She has uploaded twelve videos so far, which includes her rap, her rants, and routine videos. You Go Girl!

Aforementioned, Antonio Brown’s daughter, AntanyIah, can probably blow your mind with her mindfulness and achievements.

Though AntanyIah is very young, she is very enthusiastic about running. And daddy’s little princess never fails to amuse the crowd with her athlete abilities. According to Antanyiah’s Instagram, her father is always present during her race days, rooting for her.

Besides running, Brown’s daughter is also into other sports like basketball and baseball. She practices regularly and casually posts on her social media handle. Alike her father, AntanyIah also appears on her father’s games and cheers for him. The father-daughter duo seems to be a very strong tag team.

As the world knows, Antonia is as famous for his legal issues with his baby mamas as he is for his touchdown dances. Similar to Brown’s legal conflict with his eldest son, AB Jr.’s mother, Shameika Brailsford, he had feuds with Antanyiah’s mother, Waltrice as well.

Antonio Brown filed for custody of his daughter after his baby mama claimed he allegedly pushed her to the ground when she asked him to pay for the girl’s hair appointment in 2019.

Jaclyn Soroka, Brown’s representative, revealed that he took legal actions to ensure his daughter’s safety by seeking decision making-authority. He further told that misleading headlines of domestic disputes were made, and Jackson inappropriately involved a minor in the case.

According to Trib Live, Brown added that Jackson had been denied additional child support from Antonio and emphasized Brown’s priorities regarding his daughter.

Antonio Brown chose a unique name for his little princess, Antanyiah. However, the name Antania is of Latin origin, which means ‘priceless one.’