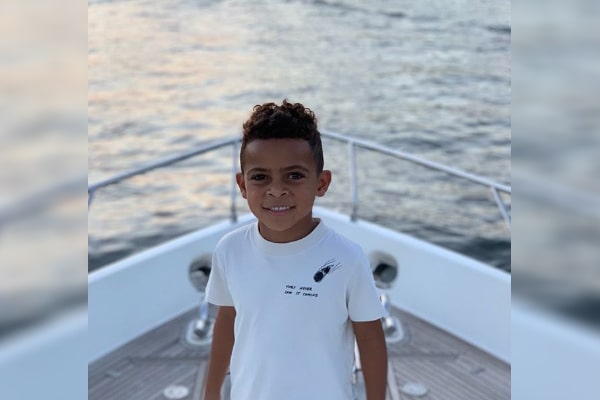 Antonio Brown is a famous American football wide receiver drafted in 2010. Famous for some notoriety and several allegations, he is back at the track after several backlashes and turned down by some major brands.

With the age and passing time, Antonio Brown is coming back with sincerity towards his career as a player and has always been a doting father of six children from different partners. Yes, Brown is a proud father of six at the age of 32. Thus, today, we shall be tailing Brown’s son, Autonomy Brown, with fiancee, Chelsie Kyriss. Prepare to blow your mind by the young Brown.

Although Antonio Brown is known for some of the most stupid feuds and some serious allegations, there is no rebuttal that he is a doting father and has changed his ways in the past few months.

Autonomy Brown was born to the on-and-off couple, Antonio Brown and Chelsie Kyriss. However, the pair kept their child’s birth confidential. Similarly, he is not the only child in the home; he is growing up with his siblings, Ali, and Apollo Brown. The three siblings share a great bond and are close to their parents as well.

Furthermore, Antonio Brown’s son, Autonomy is a big deal on Instagram as his presence is undeniable. Although he is small and his mother, Chelsie, handles baby Brown’s Instagram, he garners 123k followers on Instagram.

The posts comprise of his daily life with his siblings and fields that showcases his athletic abilities. Who knows if the NFL star, Antonio Brown’s kid, Autonomy outshines his father soon?

Astonished The World With His Interest In Sports

While athletic abilities are to be sharpened with rigorous training and overflowing passion, it sure is inheritable. Connecting the dots, Antonio Brown’s son, Autonomy Brown, inherited his father’s insane athletic ability.

Autonomy made headlines after he showcased his talent to have extraordinary ability in the field. Barely out of diapers, he already has a hype touchdown dance celebrating his victory.

Little Brown is a superstar even today and looks forward to conquering although Antonio is not crazy about letting his sons follow him to NFL.

Siblings And Half Siblings

Aforementioned, Antonio is a proud father of six, and among them, he has three boys and a daughter with his fiancee, Chelsie.

Hence, Autonomy is growing up alongside his brothers, Ali Brown and Apollo Brown. The trio seems to share a great bonding, and papa Brown appears to be proud of them. They are into everything, from dance to workouts, to games.

Additionally, the pair welcomed their first daughter together during this pandemic. Papa Brown posted a photo of them holding their newborn with a hashtag Allure. Fans are speculating that Antonio named his daughter Allure.

Autonomy, Antonio Jr., Apollo, and Antanyiah are active on Instagram while Ali is off.

Let’s hope the sibling bond continues to grow along with their age.