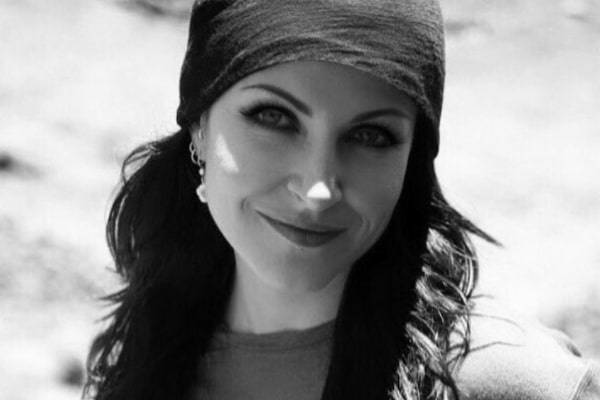 Dan “The Outlaw” Hardy is a former English mixed martial artist who competed in the welterweight division. Born as Daniel Mark Hardy on the 17th of May, 1982, he competed in Cage Force and Cage Warriors before signing in with the Ultimate Fighting Championship. A professional since 2004, Dan even competed with MMA legend George St-Pierre for the UFC welterweight championship, which he lost via decision. The Nottingham-born also worked as a UFC commentator and broadcaster before completely parting ways in late 2020.

Aside from his MMA business, he was once married and is currently dating Venezuelan UFC bantamweight fighter Verónica Macedo. Furthermore, Dan Hardy’s ex-wife Lacey Ann Hardy is a popular social media influencer and is into various things.

Below let’s look at the lovelife of Dan and his ex-wife to get to know her better.

Lacey Is A Spiritual Being

Dan Hardy’s ex-wife Lacey Ann Hardy is a certified senior spiritual yoga instructor and one of the biggest influencers of intertwining medicines. She is from Los Vegas, USA, and goes by Lacey Anna Luna. after separating from her ex-husband.

Aside from yoga, Dan’s ex-wife is also into Ayahuasca and mindfulness retreat. She recently hosted a mindfulness retreat for 8 days in the Peruvian Andes mountains of Sacred Valley. She also does alchemy, embodiment, and spiritual healing.

Her social media is filled with various yoga poses on beautiful terrains. Despite being influenced by the punk culture similar to her former partner, Lacey is becoming more of a colorful person day by day.

Promotes Intertwining Medicines Not Only Through Social Media

After parting ways with her ex-husband, Lacey has focused more on herself and her interest. Aside from promoting the benefits of intertwining medicines on her social media, she has even appeared on a couple of podcasts.

In February of 2021, Dan Hardy’s ex-wife talked about why medicinal plants are a powerful healing tool but not for everyone on the Journey podcast hosted by Alexander Faubel.

Other than mindfulness retreat, she also organizes workshops along with her friends and teaming up with different training facilities.

Follower Of The Controversial Bikram Yoga

Dan Hardy’s ex-wife Lacey Ann Luna is a senior certified trainer of Bikram Yoga, formed by the controversial yoga guru Bikram Choudhury. It is an exercise in the form of yoga which makes it unique from the usual poses.

People also call it Hot Yoga as Bikram conducts the instructor training by only wearing a speedo. This led to many controversies, and many students have come forward as victims of his sexual abuses.

To become a senior instructor for Bikram yoga, one must undergo months of grueling training at a hotel, and the applicants are not allowed to contact the outside world.

Dan Hardy’s ex-wife Lacey Ann Luna is also known for her frequent hair color changes. She had her hair colored in red, pink, blonde, blue, purple, and the list goes on.

I assume you mean different? My wife, and yes. 😉 https://t.co/5B7bnvcuAi

Even her former partner had red hair during his run in the UFC and a mohawk on top of it. However, Luna has maintained black hair for a while but since she is into spiritually it is only a matter of time before she starts exploring.

The ex-pair got married in October 2014. However, the MMA fighter and his ex-wife separated some years after for reasons undisclosed. So it was quite a shock in the MMA world when the news of their divorce only became known to the public when they saw Hardy with Verónica Macedo.

The former couple looked perfect for each other as both of them had similar likes and also had tattoos all over their bodies.

Although information regarding their marriage life is kept very within, the ex-lovers didn’t have children together.

At present, Dan Hardy’s ex-wife, Lacey Ann Luna, is busy with her career and focusing on her work. Her personal duties and needs are aside due to her traveling work.

Hardy, on the other hand, as mentioned above, is in a rock-solid relationship with Verónica Macedo. He would even accompany her during her fights before he was let go by the UFC.

The couple even works together in promoting Hardy’s brand Full Reptile, which focuses on athlete apparel.

Nevertheless, Lacey Ann Luna is enjoying life both physically as well as spiritually. We wish her the best for the future and also hope to see her with someone in the days to come.