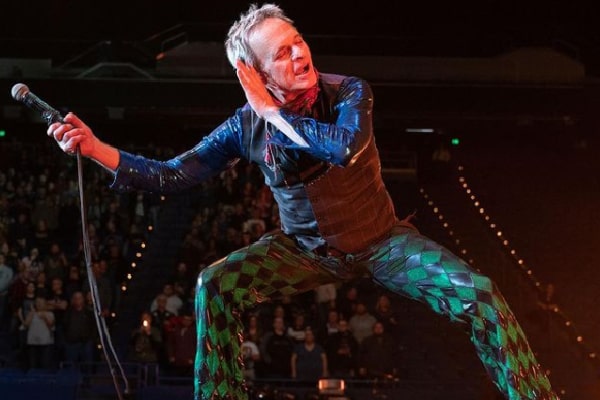 David Lee Roth is a multi-talented personality, popular for his electric stage persona and as the hard rock band Van Halen‘s lead vocalist. He has been part of the music industry for more than four decades and is still working enthusiastically. Furthermore, the former Van Halen member has amassed a massive fortune from his musical career.

With over 112 soundtrack credits, several RIAA-certified Platinum and Gold solo albums, and a few directorial credits, the famous musician has amassed a fortune from his career. Furthermore, David Lee Roth’s net worth is presently estimated at $60 million and continues to rise every day. Therefore, let’s put David Lee Roth’s earnings under a microscope.

Aforementioned, singer-songwriter David Lee Roth’s net worth is estimated at a whopping $60 million. The mammoth-sized wealth is mostly accumulated through his career as a musician. However, Roth’s other endeavors as an author, a licensed medical technician, a visual artist, and a skincare product line also played a vital role in increasing his assets at great speed.

‘David Lee Roth’ is a reputed name in the music industry since 1972. His contribution as a musician, singer, songwriter is remarkable, and he is mostly known for his stage persona and as a former Van Halen vocalist. Besides Van Halen, Roth’s solo career is a massive hit, and he has released numerous Gold and Platinum-certified albums.

Furthermore, known for his raspy voice and eccentric performance, David Lee Roth has released seven studio albums from the mid-80s. Likewise, he was a big part of Van Halen and released seven albums with the band until they disbanded in 2020.

Most of David Lee Roth’s album managed to hit the Billboard 200 list and successfully earned from it. Besides the album’s sales, Roth’s wealth sky-rocketed because of tours and concerts as well. Some of his albums are listed below with their respective prices.

As a former band member and solo artist, David Lee Roth has performed in the biggest arenas and in front of thousands of fans. Hence, the tour not only boosted his career but increased his bank balance as well.

Furthermore, David Lee Roth made the use of technology very wisely. Did we fail to mention that the legendary rock artist is on YouTube since 2012? He began to broadcast a video webcast on his channel named David Lee Roth. With 48.8k subscribers and millions of views on 170+ videos, Roth bags an estimated $215 – $3.4K per year. Given the massive career, his YouTube earnings aren’t much. But David uses his platform to speak about a wide variety of topics on an iTunes show called The Roth Show.

Thus, David Lee Roth’s fortune of whopping $60 million did not come by easily.

As mentioned earlier, David Lee Roth’s earnings mostly depend on his musical career. But that doesn’t mean his skincare venture did not aid in the proliferation of his bank balance.

In 2018, Roth partnered with a tattoo artist, Ami James, and created INK the Original. Some of the items in Roth’s skincare products are listed below with their respective prices.

David Lee Roth is more than a musician. An author, a visual artist, and a licensed emergency medical technician in New York, Roth revealed that his life is entirely different away from music. According to Salary.com, an Emergency Medical Technician’s average salary ranges between $33,486 to $41,548 per year. However, the payscale widely depends on factors including educations, certification, and years of experience. Thus, extra works outside the music industry helped to increase David Lee Roth’s net worth.

As money comes, lifestyle changes occur. Hence, with great success and cash-flow, David Lee Roth is living a decent life at his massive home in Pasadena. The visual artist, Roth, never married and has got reportedly two children. Hence, he is enjoying the moment, earning and sharing his talent with the world. As one of the great influencers and a massive name in the music world, David Lee Roth’s earnings are decent, and his ventures are fruitful.

Thus the former Van Halen vocalist continues to fit in the ‘bigger-than-life’ persona and positively influence the world through his artistry.