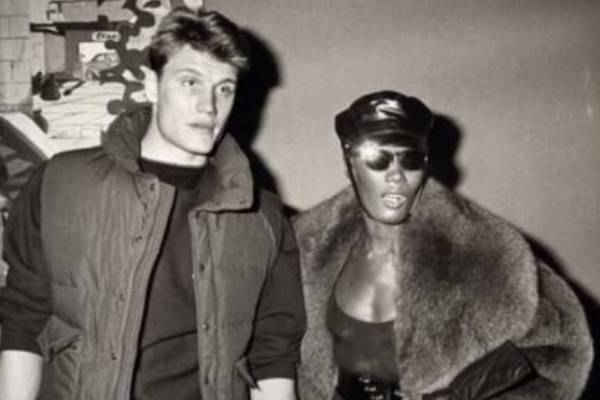 Dolph Lundgren and Grace Jones are popular names in the entertainment world. If one has watched Rocky IV, Dolph is a familiar face to them. Similarly, Grace Jones is well-known as the Queen of Pop.

Besides their professional fame, Dolph and Grace made headlines because of their relationship. So, today, let’s learn about Dolph Lundgren and Grace Jones’ relationship and why they broke up.

Grace Jones had first spotted Dolph Lundgren at a nightclub, and she then hired him as a bodyguard. During that time, Dolph was completing his master’s degree at the University of Sydney, and Grace was touring Australia. He was awarded a Fulbright scholarship to continue his studies at the prestigious Massachusetts Institute of Technology and had plans to move to Boston.

After Dolph was hired as Grace’s bodyguard, their whirlwind relationship begun. Although he was about to head to Boston to complete his studies, their relationship made him change his decision. And instead, Lundgren followed Jones to New York. There he enrolled in acting school. Furthermore, he did modeling and worked as a bouncer at night in order to boost his income.

Moreover, Dolph and Grace starred in the 1985 James Bond film, A View to a Kill. The former couple became regulars at Studio 54 and used to party with different celebrities like Michael Jackson, David Bowie, and Andy Warhol.

Their relationship was one of the most interesting ones in Hollywood.

Over the years, Lundgren has recalled about how his romance with Jones was like. For example, in one of the interviews, he mentioned that he and Grace used to be involved in sexual activities along with as many as five girls, whom Grace used to bring. He described the activity as “exhausting.”

However, Grace has not made any comments about their relationship, but some of the tabloids suggest that in her 2016 memoir, she had said that Dolph had saved her life.

It seemed like the handsome actor struggled to keep up with his then-girlfriend’s bedroom activities. Moreover, their relationship ran its course, and the former couple separated after three years.

Their Relationship Ended In 1986

As mentioned earlier, Grace and Dolph began dating in 1983. They were together for three years before ending their relationship in 1986.

Dolph mentioned that his rising fame was the reason behind the couple’s split. In 1985, he starred in the James Bond movie, A View To Kill, alongside Grace.

The same year, Grace Jones’s former lover, Dolph, was cast in Rocky IV alongside Sylvester Stallone, which completely turned around his career. The audience loved his performance as Ivan Drago. The Russian character even became one of the most famous movie villains in Hollywood.

The film was a huge hit and grossed $316 million at the box office. Moreover, due to his performance, Lundgren became famous overnight. In one of the interviews, Dolph recalled how he was shocked by the sudden change in his status.

Dolph explained that he had walked into the theatre as Grace’s boyfriend. But 90 minutes later, people were trying to take pictures of him instead. He mentioned that after other women showed up, his then-girlfriend, Grace, got jealous and could not handle the attention he was receiving.

As a result, their relationship started deteriorating. Moreover, Lundgren was expected at several openings and could not spare time for his love life. And sadly, within six months, the relationship between Grace and Dolph was over.

Following the breakup, both of them moved on in their respective lives.

After the breakup, Grace Jones’s former boyfriend, Dolph Lundgren, married Swedish jewelry designer Anette Qviberg in 1994. The couple welcomed two daughters, Ida Sigrid Lundgren, in 1996 and Greta Eveline Lundgren, in 2001. However, his marriage with Anette also did not last forever, and they divorced in 2011.

After his divorce, Dolph dated Jenny Sandersson from 2011 to 2017. Lundgren was heartbroken after another failed relationship and had vowed to stay single for a long time.

However, he then met Norwegian personal trainer Emma Krokdai in 2019, and the pair started dating soon after. Dolph is now engaged to Emma, having proposed to her in June 2020. He is currently living a great life with his fiancee and kids.

Talking about Dolph Lundgren’s ex-girlfriend, Grace Jones, she too moved on in her life. She began a relationship with Danish stuntman and actor Sven-Ole Thorsen in 1990 and had an open relationship.

Furthermore, before dating Dolph, Grace was in a relationship with Jean-Paul Goude, and they have a son together, whom they named Paulo Goude. In addition, she was married to a Turkish man, Atila Altaunbay, in 1996. However, their marriage ended in 2004.

Grace might be possibly single and enjoying her professional success.

Grace and Dolph’s relationship made headlines in the 1980s. However, they have since moved on with their respective lives. Moreover, the estranged couple seems to have a great relationship.