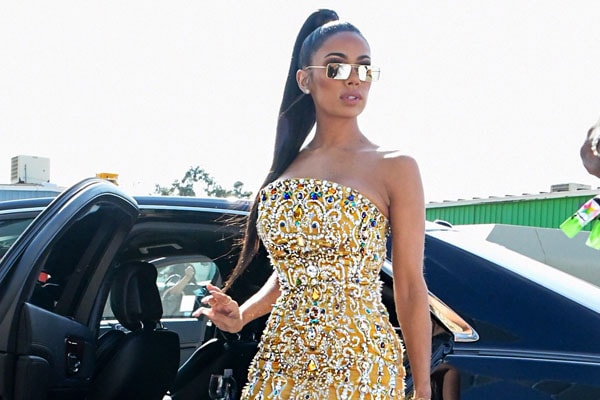 American reality TV star Erica Mena might be one of the most controversial figures in the history of American television. From her memorable fights to her open bisexuality, her antics make for some must-see television. Primarily known for her appearance in Love & Hip Hop: New York, she has joined the crew of Love & Hip Hop: Atlanta and as a result, Erica Mena’s Net worth has reached $1 million.

Erica, who started out as a model starring in music videos, got her big break in 2011 when she was cast in VH1’s hit reality TV series Love & Hip Hop: New York. Since then Mena has made quite a name for herself, sometimes for the wrong reasons as well, the most notable being her infamous attack on her ex-boyfriend Raul Conde. Her controversial style has kept her in the spotlight over the years, helping her earn a lot of money in the process.

And with a new lucrative contract with her new show Love & Hip Hop: Atlanta, that is rumored to help Erica earn around half a million dollars from the show, her bag of cash keeps on increasing. With her on the spotlight again, she is sure to make even more money thanks to her antics on and off the screen.

Erica Mena accumulated her net worth of $1 million thanks to her work in reality television. Her biggest cash cow was definitely the reality show LHHNY. Erica first appeared on the show in 2011 and was an integral member of the show until 2015. Though her salary on the show was not clear, she earned thousands of dollars for her appearances on the show.

In addition, Mena has also made a lot of money from her modeling endeavors. She has appeared in many music videos with top singers over the years. She has performed in videos for the likes of Lil Wayne, Chris Brown, Young Jeezy, amongst others, earning a lot of money in the process.

Thanks to Erica Mena’s Net worth being pretty hefty, she has had a pretty good lifestyle. She is seen wearing a wide range of stylish clothes and traveling to fancy places. She also owns a lovely white BMW car.

In 2018, Erica rejoined the cast of Love & Hip Hop: Atlanta, further helping her net worth. What is interesting to note that in 2017, Erica claimed that she would never go back to LHH and those who go back want the money. Since she herself is going back, she must be making a lot of money from the show. 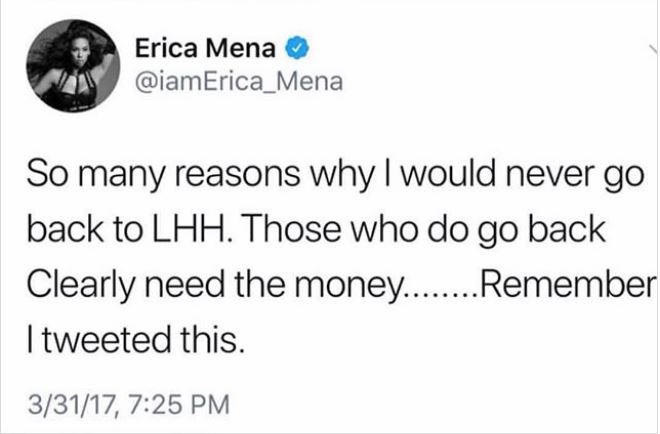 Though her salary has not been revealed, she is supposedly one of the highest paid members of the show. Joseline Hernandez makes $400K per season, so Erica must be making a similar amount too. As a result, Erica Mena’s Net worth is pretty amazing.