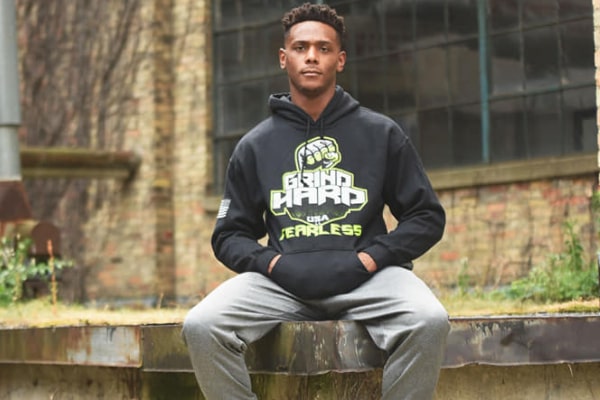 Jamahal Alexander Hill is an American mixed martial artist and an uprising athlete in the sport. Jamahal “Sweet Dreams” Hill is currently signed with the Ultimate Fighting Championship and competes in the light heavyweight division.

The 30-year-old became a professional in 2017 and represented the Black Lion Brazilian Jiu-Jitsu team. Hill made his UFC debut through Dana White‘s contender series season 3 in July of 2019.

Below let’s discuss five interesting facts about the Chicago native and get to know him more.

Other than MMA, Jamahal Hill‘s highlight in life must be being a father of six children. The UFC fighter has a total of 3 daughters and 3 sons.

Jamahal Hill’s daughter Malaya Hill, his eldest child, is 14 years old. His second child and the eldest son is named Kah’mani Hill. He is 11-years-old and a skilled baseball player. The 6’2″ fighter’s other children are Carmella Hill, Jamahal Jr. Hill, and Kah’mila Hill.

Furthermore, Jamahal Hill’s son Jaizear Hill is his youngest born of 2-years-old. Despite having his social media flooded with family and children pictures, the father of six has never revealed his significant other/partner.

The blue belt in BJJ keeps things to himself regarding his lovelife.

Before bursting into the UFC, the Chicago native was competing in the Knockout Promotion. Surprisingly the UFC light heavyweight remains unbeaten and holds the record of 8 wins and 0 losses.

He is ranked as no.15 light heavyweight in UFC, despite only fighting thrice for the organization. Ovince Saint Preux, Darko Stošić, Klidson Abreu, and Dequan Townsend are some notable opponents Hill has faced.

Sweetdreams is scheduled to fight Paul Craig in UFC 263, headlined by the rematch between Israel Adesanya and Marvin Vettori. This bout was previously scheduled for March in UFC on ESPN 21 but fell off as Hill tested positive for Covid-19.

Well, Jamahal has continued to put out amazing performances that keeps everyone on toes. His latest bout against Johnny Walker is a perfect example of his hard work and determination to win matches. Hill delivered a devastating punch which knocked out Johnny.

Passed On A Basketball Career For DU Panthers

Before Jamahal Hill transitioned into MMA, he was into basketball and football. The father of six took basketball on a more serious note as he was a member of Rogers High School basketball team. Surprisingly when he attended Davenport University in Michigan, the 6’2″ would not join the basketball team.

Jamahal Hill’s net worth is estimated to be a considerable sum,.which is mostly due to his MMA career. According to Tapology, the DU alum has roughly earned $24,000 which is is career undisclosed amount. On the other hand, some sites claim that his highest payday is $23,500 from his bout with Ovince Saint Preux.

Aside from MMA, Hill also owns an apparel store called “The Sweet Dreams Nation.” The store includes t-shirts, caps, hoodies, and herb grinders. The most expensive products are the hoodies which are priced at $44.99.

He is also sponsored by Koeze Company, established in 1910, known for its handcrafted peanut butter. Other than peanut butter, the company also manufactures chocolates and gourmet nuts.

Since it is a global company, we can assume it is one of the biggest contributors to Jamahal Hill’s net worth.

Jamahal Hill’s tattoos are very simple looking but not as pretty as you think. The fighter has a lettered tattoo just below his neck, which says “Northsides“.

There are also two thumbs up tattooed in both his chest, which looks like unfinished material. He has an arm tattoo of the number 22 and a name written on his other arm.

All of Jamahal Hill’s tattoos may look strange to many but has a deeper and stronger meaning to him, which we hope someday he reveals. We also wish to see him get new tattoos as he is finally becoming a regular in UFC.

Nevertheless, Jamahal “Sweet Dreams” Hill remains undefeated in MMA and is looking forward to making his presence fell in the UFC. He still has a lot to prove to reach higher ranks and challenge for the UFC gold.

We wish him the best for his upcoming bout and his well-being. We also hope to see him succeed and be the greatest provider for his children.