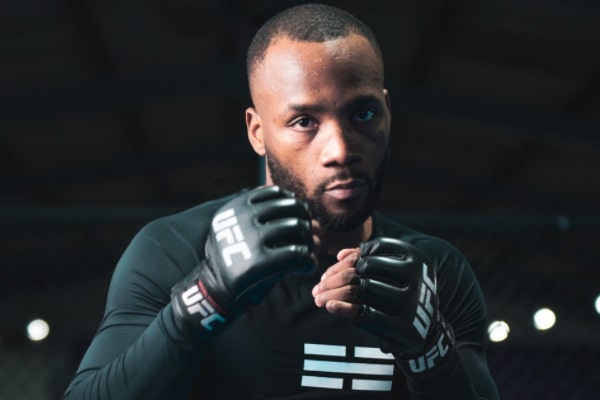 Leon “Rocky” Edwards is a British-Jamaican professional mixed martial artist competing in the Ultimate Fighting Championship. Leon has been a professional since 2011 and has a record of 18 wins, 3 losses, 1 no-contest so far in his MMA career.

The 29-year-old welterweight had a crime-infested childhood that saw him involved in drug dealing, street fighting, and knife possession. Only at the age of 17, the UFC fighter would turn his life around by doing MMA.

Below, let’s look into 5 interesting facts about Leon Edwards to get a better understanding of him.

Leon Edwards’ father was the main reason why he was involved in crimes at an early age. Before moving to Birmingham, England, Leon Edwards’ family lived in a one-room in Kingston, Jamaica.

The 6 ft fighter once stated that his father was involved in questionable activities and hardly talked about him. Sadly when Leon was 13, his old man was shot and killed at a nightclub.

Since he was the eldest in the family, the UFC fighter had a huge burden on his shoulder. After transitioning into MMA, Leon Edwards became the man for the family and has always upped his game ever since.

His Brother Is Also A Pro Fighter

Leon Edwards has a younger brother, Fabian Edwards, who also is a pro-MMA fighter.

Following in his brother’s footsteps, Fabian “The Assasin” Edwards competes in the middleweight division of Bellator MMA. Both the brothers train together and were born just a year apart.

Team Edwards
Back to Back week in 🇺🇸 we’re going to put on a master class @leon_edwardsmma pic.twitter.com/cenfCEF4GX

The sport of MMA has had a fair share of family feuds, but in their case, everything is sailing smoothly. It is only a matter of time for the UFC to sign Leon Edwards’ brother Fabian Edwards.

Father To A Seven Year Old

The 29-year-old is very private regarding his love life. So much so there are no rumors or pictures of the MMA fighter with his partner.

Surprisingly, Leon has a seven-year-old called Jason Edwards. Rocky has vowed to become the ideal father figure despite staying busy with his profession. Leon Edwards’ son is must be growing up with immense love and pampering.

Despite rarely posting about his little one on social media, the father and son spend quality time together. Back in 2019, Jason Edwards and his father went to Dubai for a vacation.

Leon Edwards’ baby mama remains a mystery as details remain undisclosed. It is unsure whether the welterweight title contender has a wife or a girlfriend due to his privacy.

One Of UFC’s Finest

Leon Edwards has been competing in the UFC for almost seven years now. His two losses in the UFC came by courtesy of MMA veteran Clay Guida and the UFC welterweight champion and record holder, Kamaru Usman.

The current no.3 UFC welterweight was scheduled to fight former champion Tyron Woodley, but then the global pandemic happened. He was booked to fight upcoming talent Khamzat Chimaev but would again fall off due to the covid-19.

Finally, after 602 days without action, Leon Edwards faced Belal Muhammad in March of 2021, which ended in a no contest. Likewise, in August 2022, he faced Kamaru Usman during the UFC 278. In the event, he was the first person to score a takedown in Round 1. But in the other rounds, he struggled to build momentum.

As Round 5 started, Kamaru’s pace slowed and it seemed to be leading to a unanimous decision. But, suddenly, Edwards knocked Usman with a left head kick and claimed the title.

Leon Edwards’ net worth is possibly in millions which consist of his income from his MMA career, endorsements, sponsorships, and business ventures.

The father of one is even sponsored by Uniform Wares, a London-based Swiss-made watch company. He is also endorsed by Montirex, an apparel company especially targeted to athletes. He even has his own collection with the company. The British fighter is also sponsored by Iconic Men’s Wear, a UK-based apparel company, and Janus CBD, one of Europes top CBD brands.

Nonetheless, Leon “Rocky” Edwards recently won a slobber knocker with Nate Diaz in UFC 263 which was headlined by Israel Adesanya and Marvin Vettori.

Best regards to the Jamaican born for his upcoming match and his future. We also wish the very best to Leon for his well-being.