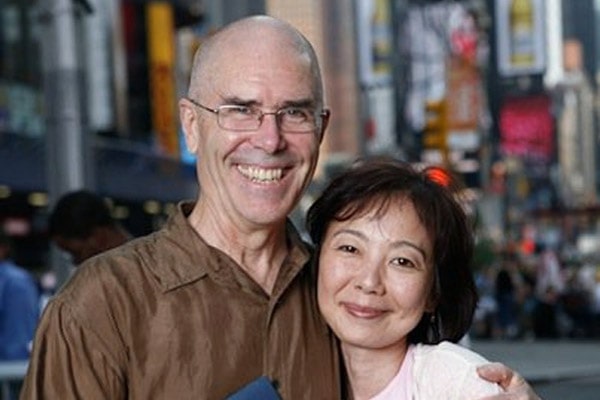 Almost no one well-updated with the Hollywood Industry is unknown to Liza Todd, daughter of the late queen of classical Hollywood cinema of the 1950s, Elizabeth Taylor. Besides gaining fame for being Elizabeth Taylor and Mike Todd’s daughter, Liza is famous for her equestrian sculptors exhibited throughout the U.S. and Europe. Moreover, since 2016, she is focused on benefiting African wildlife, specifically the orphaned elephants preserved by HSEC and Jabulani in South Africa.

Liza was once in a marital relationship with an artist, Hap Tivey, from 1984 to 2003.  At the time, Hap was married to Liza; he often used to be in media headlines. However, after the divorce, he is living a peaceful life away from the spotlight.

Here, know where Liza Todd’s ex-husband, Hap Tivey is and what he is doing nowadays.

The former husband of Liza Todd, Hap Tivey, started creating sculptures and light installations since the late 1960s in Los Angeles. His early creations deliberated the influence of LA light artists like Doug Wheeler and James Turrell. Moreover, Hap worked together with those artists on large scale searchlight structures.

Hap Tivey’s first commercial exhibition was at Blum Helman in New York during the 1980s. Then, his shows expanded at Landau-Alexander, Margo Leavin, and Elizabeth Leach.

After gaining success as a light artist, Tivey focused on creating a sculptural format that used the same materials as paintings but included a light source within the structure. He kept continuing his light art, luminous painting, and works on sculptures.

It has been more than three decades, Hap Tivey is in the art field, and he is carrying on with it to date. His works get featured in several key galleries and museums around the United States. Moreover, Hap won various awards in recent days, including Arts and Letters Award.

Furthermore, Liza Todd’s ex-partner was also one of 4 Cleveland alumni to have been awarded the distinguished ‘Order of the Feather’ in 2019.

As we mentioned earlier, Hap Tivey married Liza Todd in 1984. Their marital bond was rigid for over a decade. But, various hidden issues swirled in their relationship. As a result, they untied their nuptial knot and ended it with a divorce in 2003.

At the time, Hap and Liza Todd were still husband-wife; Liza gave birth to Hap Tivey’s sons, Quinn Tivey and Rhys Tivey. Their first son, Quinn, was born in 1989 and Rhys, in 1991.

Both of Hap and Liza’s sons inherited their parents’ artistic skills but in a different way. Currently, Rhys is a triple threat, a vocalist, a jazz trumpeter, and a songwriter. Similarly, his brother, Quinn, is an artist mainly known for his group exhibition of Abstract Communication at HEREart, Soho, New York.

Furthermore, Hap and Liza Todd’s sons are social activists who are actively working for an AIDS-free world along with other projects. Moreover, they are the ambassadors of their grandma’s foundation, the Elizabeth Taylor AIDS Foundation, for several years.

Remarried After Divorce With Liza Todd

After the divorce with his long-time partner, Liza Todd, Hap Tivey, stayed away from the spotlight’s reach. However, it’s hard to escape the prying eyes of media once you grab public attention. Currently, he is living a healthy life with his second wife, Chiori Miyagawa.

It’s not known when the couple, Hap and Chiori, married, but it’s clear that they love each other a lot. And, there are no signs of the lovely couple having any troubles in their happy life. They look contented with their conjugal life.

Hap Tivey’s wife, Chiori, often posts photos with her beloved husband on her social media handles. Also, she shares pictures with her stepsons or Hap Tivey’s sons with Liza Todd occasionally. The snaps available in Chiori’s social media pages reflect that Hap enjoys his life surrounded by his wife, kids, and arts in New York City.

Prefers To Stay Away From Paparazzi

Hap Tivey is a very secretive person. Tivey always makes sure that his personal information remains away from the reach of the press. Moreover, he prefers to stay away from the media paparazzi. Hap rarely appears in public, and if he show up to the public also, he makes sure no one-click his photos.

Furthermore, Liza Todd’s ex-husband, Hap, does have social networking accounts. However, he never shares his pictures as well as everyday life events there. His Facebook and Instagram are full of his artistic works.

As for now, Hap Tivey is living a blissful life with his current wife, Chiori Miyagawa, and his sculptures in New York.