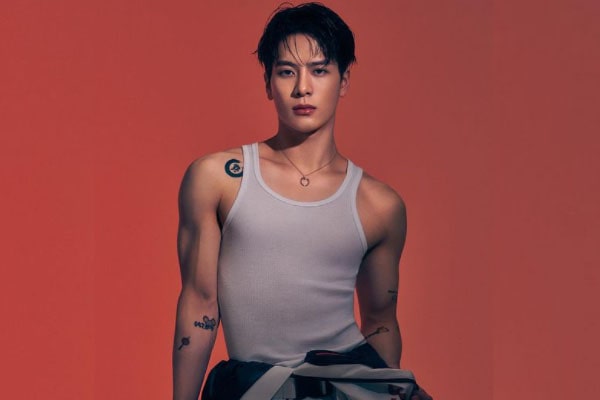 Jackson Wang has a total of eight tattoos on his body. Image Source: Instagram/ Jackson Wang.

Jackson Wang is a familiar face to K-pop music fans. He is a Hong-Kong rapper, dancer, and singer famous for being a member of the South Korean boy band, Got7. Wang is also the founder of Team Wang, a record label that he founded in 2017. Moreover, he serves as the creative director and designer for his fashion brand named Team Wang Design.

Rapper Jackson Wang is not just fond of music and fashion designing. Rather, he seems to be passionate about tattoos as well. In August 2020, he surprised his fans by revealing his tattoos for the first time on the cover of the prestigious Chinese magazine SuperELLE. Take a look at some of Jackson Wang’s tattoos and their meanings.

While revealing his tattoos on the SuperELLE magazine, the first tattoo Jackson Wang talked about was the character ‘福’ inked on his right shoulder. It translates to ‘fortune’ or luck’ in English.

Wang said it was an homage to a Chinese tradition where the families hang posters on their doors with the same character upside down during Lunar New Year. He added that he got the tattoo with the character ‘福’ upside down and pointed towards him. It means luck is on him or fortune reaches him.

An Illustration Of A Lantern

Jackson Wang’s other tattoo is a Chinese Lantern on his forearm. It has a special meaning in Jackson’s heart.

According to Jackson Wang, that lantern was from when he was around seven or eight years old, during that year’s mid-autumn festival. All the kids except him were playing with lanterns in a park as his parents didn’t prepare it, and he didn’t ask for it with them either. But, when he reached home from the park, he saw a table was full of mooncakes, dishes, and lots of lanterns, including a superman shaped lantern.

Once he saw that scene, he cried because he actually had wanted lanterns. But Wang kept telling himself to forget about it. But his parents understood his want and surprised him with the lanterns.

After the incident of the lantern as mentioned above, Jackson Wang realized that his parents really love him. So, he decided to get a tattoo of his mom and dad’s birthdays and zodiac signs when he grew up.

Speaking of Jackson Wang’s family, he also has a brother, who is a very private guy.

Before joining the Korean Entertainment industry, Jackson Wang was a Junior Sabre Fencer for Hong Kong’s fencing team. He achieved the eleventh position in the 2010 Summer Youth Olympics. Though Wang didn’t return to Sabre, he tattooed some portion of his left arm with Olympic rings. It represents the first time he joined the 2010 Singapore Youth Olympic Games as a fencer.

Furthermore, the sword just below the Olympic ring represents the fencing sword.

Almost everyone well-updated with Jackson Wang’s life might know that he is the founder of the Team Wang record label. Moreover, he also launched Team Wang Brand, a fashion line in 2020, where he is the lead designer.

So, in tribute to his record label and fashion line, he inked ‘TEAM WANG: LET’S MAKE HISTORY’ and ‘COOKIES’ on his left abdomen. Aforementioned, ‘Team Wang’ is Wang’s brand, while ‘Let’s make history’ is its motto. Similarly, Wang mentions each of Team Wang Fashion collections as ‘Cookies.’

Reason Behind Jackson Wang’s Decision To Get Tattoos

According to Jackson Wang, the decision to get the tattoos came after he reflected on his goals. He said in the magazine interview that, in 2020, he had some time alone for himself. So, he thought about many things like the happiest things in his life, what he believes in and what image he wanted to portray.

After he began to understand himself more, he figured out that he wanted to get tattooed. At first, he hesitated because he thought he wouldn’t be able to pull it off. However, later, he thought he was getting tattoos on his body, and it does not harm others.

Later, when one of Jackson Wang’s fans asked him if he wanted more tattoos, he replied in English that he would if he wants to. It seems like we might see more of Jackson Wang’s tattoos in the coming days, and we hope to know some more about his life’s special moments.