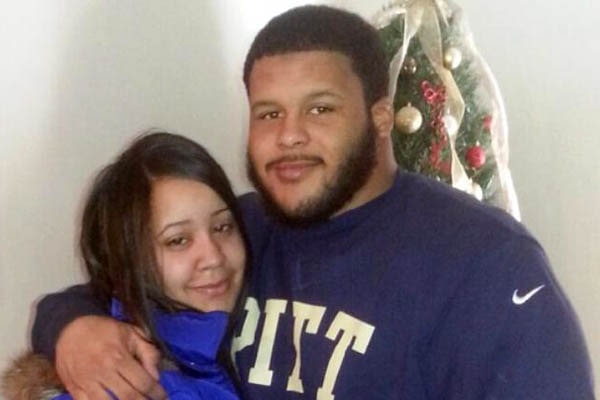 Aaron Donald, originally Aaron Charles Donald, is a big name in the field of sports. He is a well-known American football defensive tackle currently playing for the NFL’s Los Angeles Rams. Donald is a former college football player at Pittsburgh, where he got recognition as a unanimous All-American. Previously, the Rams had drafted him with the thirteenth pick in their first round of the 2014 NFL Draft. The seven times Pro Bowl winner Aaron Donald has been named one of the greatest defensive tackles of all time.

NFL’s most unstoppable force, Aaron Donald, was in a romantic relationship with Jaelynn Blakey. However, he separated from his long-time beau after having two gorgeous kids with her. Here, know who Aaron Donald’s ex-girlfriend, Jaelynn Blakey is and if she is dating anyone after her recent break-up.

Both Jaelynn Blakey and Aaron Donald are graduates of Penn Hills High School. It is where the former couple met for the first time. After meeting during their high school days, their friendship soon turned into an intimate relationship. At the time, the now-estranged romantic pair, Blakey, and Donald began dating; Donald was still struggling to rise to prominence as a footballer.

Despite being in a romantic relationship for almost a decade, Blakey and Donald never married. Lately, it seems as they have separated as the NFL player is rumored to be dating a new girl. However, both parties have not revealed much about the reasons behind their separation in public.

Furthermore, when Blakey and Donald were together, she attended her man’s games to cheer him. She even shared pictures of Aaron on her social networking handles to mark his success.

In years of relationship with the celebrity sportsperson Aaron Donald, Jaelynn Blakey got the privilege to become a doting mom to two kids, a daughter, and a son. Aaron Donald’s ex-girlfriend, Jaelynn, welcomed their first kid, Jaeda Donald, some years after the starting of their romance in April 2013. Likewise, they gave birth to their second kid, Aaron Donald Jr., on 6 April 2016.

Following the break-up of Blakey and Donald, they shared the custody of their young ones. Despite the separation, the former duo remained good friends to raise their kids together. Though Aaron Donald’s ex-girlfriend, Jaelynn, does not appear together with him at the moment, Aaron’s YouTube channel often features their children.

Moreover, both Jaelynn and her ex-boyfriend, Aaron, regularly share photos with their children on their respective social media handles.

Blakey’s Date After Separating From Donald

Reportedly, the NFL star Aaron Donald moved on with a new girl named Erica Sherman, a Louisiana State University graduate. In fact, it looks like the two are already engaged. In July 2020, Donald shared a vlog on his YouTube channel, where he addressed Erica as his fiancee. His YouTube video is about his surprise to his current love, Sherman, on her birthday. Seeing the video, it seems like they are friends since their childhood days.

However, going through the Facebook profile of Aaron Donald’s ex-girlfriend, Jaelynn Blakey, it seems to be filled with her past memories. Blakey’s Facebook page is still full of pictures of Aaron and their kids. Moreover, her posts do not hint at her starting a new romantic relationship. But, we hope, like her former partner, Blakey also finds a new man shortly.