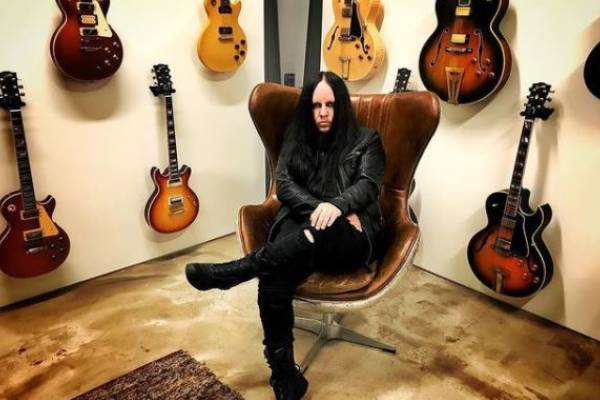 Nathan Jonas Jordison, aka Joey Jordison, was a musician and songwriter of American nationality. He came into prominence as the co-founder and drummer of the famous metal band Slipknot.

Sadly, we lost the talented singer Jordison at the age of 46 on July 26, 2021. The successful singer had gained immense fame and fortune in his career, and despite the fame, he seems to have kept his personal life private. The fans are eager to know Joey Jordison’s net worth and his love life.

Therefore, let’s learn in detail about his personal life and fortune.

Joey Jordison Net Worth And Earnings

In the musical world, Joey Jordison was a well-recognized name. Born in Des Moines, Iowa, Joey began playing the drum at the age of eight, when he received his first drum kit as a gift from his parents. Furthermore, while at elementary school, he had started his first band.

Thanks to his musical career, Joey Jordison’s net worth was estimated to be $5 million.

As stated earlier, Joey Jordison began playing drums at the age of eight and had already formed his first band in elementary school. After his dad-mom got divorced, he formed the band Modifidious where he played drums.

After he left school, Joey was hired by a local music store named Musicland. After a shift in interest from thrash metal to death metal in America, the band, Modifidious disbanded in 1995. Then, he joined a local band, The Rejects, where he played guitars. However, he only played a couple of shows.

Jordison remained with the band for almost two decades, and in December 2013, the band announced that he had left after eighteen years. In all those years, he had released several albums with the band, which were sold in millions of copies, thus helping him and the band members earn significant wealth.

Here are some of the albums, along with record sales, as per The Richest.

Although the band announced his departure from the band in December 2013, citing personal reasons, later in June 2016 he revealed that he left the band after he suffered from transverse myelitis. It is a neurological disease that costs him the ability to play the drums.

Besides Slipknot, Jordison had also performed with several bands. In 2002, he revived the band The Rejects and renamed them the Murderdolls. He became the guitarist, and to play bass, he recruited Joseph Michael Poole, aka Wednesday 13, of a horror punk band, Frankenstein Drag Queens Planet 13. The band’s lineup was completed after he became a vocalist, Eric Griffin, a bassist, and Ben Graves, a drummer.

The band released several albums and singles with the band which eventually helped him increase his net worth. Similarly, he had also worked in a band with Jed Simon, Kris Norris, Chris Vrenna, and Henry Derek. The band was named Scar the Martyr.

Similarly, in May 2016, he announced that he had launched a new band named Vimic. Through the band, he had released several singles and albums.

In his musical career, Jordison worked on several projects which had helped him gain immense wealth. Furthermore, Jordison had also earned from the musical tours that he had performed in.

In addition, Jordison had also appeared in the 2002 movie Rollerball and in an episode of the television series Dawson’s Creek.

Thus, Joey Jordison successfully amassed a net worth of $5 million. All thanks to his net worth, he lived a comfortable life. Even after his death, his legacy is carried by several fans.

The successful singer, Joey Jordison, had amassed immense fame and fortune to his name. Despite the enormous fame and popularity, he was known to be one of those celebrities who preferred to keep their personal life away from the media and the limelight. As a result, who Joey Jordison’s girlfriend is/was, had always been a question on everyone’s mind.

Many sites suggest that Amanda Victoria was the girlfriend of late singer Joey Jordison. In December 2018, he uploaded a photo of a decorated Christmas tree.  In the caption, he wished Happy Holidays and even tagged her and their cat.

Similarly, Jordison also had an Instagram for his cats, and the description of the cat’s Instagram suggests that he and his girlfriend are the cats’ mom and dad.

A lovely couple of Joey and Amanda were together since 2010. Despite being together for more than a decade, they did not have any kids. However, as mentioned earlier, they were cats’ parents of their five cats, Murray, Milo, Maximus, Maverick, and McGee.

Going through her Instagram, we can see that Joey Jordison’s girlfriend has described herself as an epic pondered, devout realist, and generally amused. Furthermore, she even used to assist him to his concerts and work.

Victoria was present with Joey at the time of his death.

Besides Amanda, Joey was also linked with other artists like Lexa Vonn, Talena Atfield, Kim Dylla, and Illyria Jade.

Despite the rumors, Amanda and Joey were together for a long time.

We hope that Amanda might be handling herself well after the death of her beloved partner, Joey Jordison.