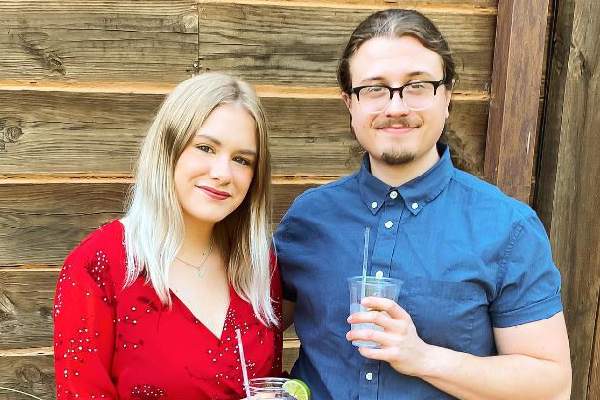 You must have heard the saying that opposites attract. Well, it might be true, considering how the famous Youtuber chef fell for someone who doesn’t cook at all. Ironically, Joshua Weissman‘s girlfriend turned fiancé Kate Rosendahl isn’t someone you can trust with cooking. Joshua is a chef pursuing his full-time career at Youtube, while his partner is in a different field.

This article will discuss how Joshua and Kate’s worlds collided and how they are proving that similar interests mean nothing. It’s core values and bonds that matter the most in a relationship. If not into cooking, then what exactly does Joshua Weissman’s fiancé does? Keep reading until the end to learn everything about the chef and his non-chef partner.

Joshua was born on January 9, 1996, in Los Angeles, California. He currently resides in Austin, Texas. Weissman started cooking with his mother when he was three. His love for food and cooking caused him to grow overweight. He was often bullied due to this. Joshua wanted to become healthy, so he changed his diet, and by the age of 16, he had lost over 100 pounds.

Later, Weissman started his own food blog called Slim Palate, where he would post about cooking diet-friendly dishes. Later in 2014, Joshua released his first cookbook, The Slim Palate Paleo Cookbook, detailing the recipes he made during his weight loss journey. In addition, Joshua started his cooking channel in 2014 and has over 273 videos. Joshua moved to Austin, Texas, when he turned 18 and pursued his passion for cooking. At that time, Weissman worked as a lead cook at Uchiko, a two-Michelin-star restaurant in Austin. After working there for a few years, he left his job to pursue YouTube full-time.

Weissman’s Youtube channel has over 7 million followers as of January 2023. He is famous for creating cooking videos based on simple and affordable recipes that are healthy and tasty. He has a very popular and interesting series on his Youtube channel that engages his viewers and is quite popular among them. His series is called But Better, But Cheaper, and But Faster. But Better is about creating better versions of fast food, But Cheaper is about preparing a full meal on a tight budget, and But Faster is an attempt to cook a meal faster than a takeout restaurant.

The Youtuber Chef also had a series called Fermentation Friday, which was solely for making fermented recipes. If you are also an enthusiast of creating delicious and easy food in the comfort of your home, then Joshua Weissman should be your go-to YouTuber chef for inspiration and help.

What’s Cooking In His Love Life?

Apart from cooking delicious meals that make you droll all over your phone screen, something else is also cooking in Joshua’s life. The chef recently proposed to his long-time girlfriend, Kate Rosendahl, in his own style. He popped the question to Kate with a ring covered under the flowery-foliage dish. Miss Rosendahl’s reaction was to die for. The couple started dating back in 2016.

After the proposal, the soon-to-be Mrs.Weissman couldn’t keep her calm and was seen flaunting her ring on social media. Furthermore, it all started in July 2016, after he asked her to be his girlfriend via a donut. Joshua Weissman’s girlfriend said yes that time and even when he asked to marry her, which proves that their love has grown stronger. The wedding date hasn’t been revealed yet, but the wedding bells are around the corner, and we cannot wait.

Joshua Weissman’s Girlfriend Is Not A Chef

If you thought the popular chef Joshua’s lover is also a good cook even though she isn’t at Weissman’s caliber, then you are wrong. Unfortunately, Miss Kate cannot cook, and according to her fiancé, she spends no time in the kitchen. But what’s the need when you have an in-house chef who can cook you the yummiest delicacies at your will? Smart move, Kate.

Even though Kate is not into cooking as much as Joshua, she has other interests. Kate has a bachelor’s degree of Arts in History with a minor in Geography and Political science from Texas State University. She is currently pursuing a Juris Doctor degree from South Texas College Of Law Houston, which is technically a Doctor of Jurisprudence.

Joshua is very proud and supportive of Kate. We can see the couple’s love for each other in their Instagram posts. There are a couple of videos on Joshua’s Youtube channel with Kate, and from there, we can see that Kate might not be of much help in the kitchen, but she sure will be the one to save you if it comes to Judiciary. The viewers loved watching Kate try her hands in the kitchen. We wish the couple lifetime of togetherness and will look forward to seeing more of Kate and Joshua’s cooking challenges.