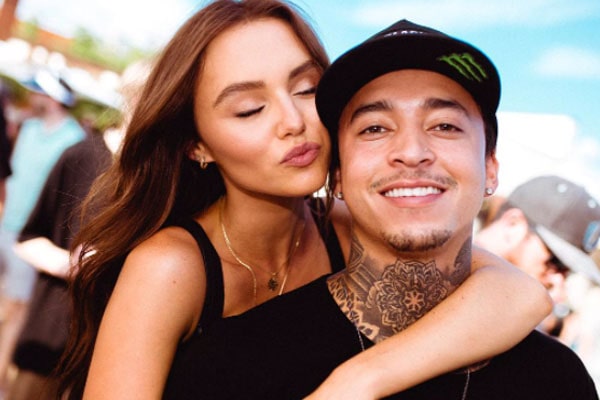 Born Nyjah Imani Huston in California, Nyjah Huston is currently one of the most loved skateboarders worldwide. The American professional skateboarder Huston has already brought home seven X-games gold medals. Moreover, he is also the winner of the ‘Best Male Action Sports Athlete’ award twice, in 2013 and 2014. Currently, Nyjah is a household name to every fan of action sport with over 4.5 million followers on Instagram and over 253K followers on his Twitter.

So, Nyjah Huston has won the hearts of many female sports lovers around the globe with his stylish skateboarding skills and attracting tattoos on his body. However, the one who succeeded in winning the pro skateboarder’s heart is model Kateri Dion. Reportedly, Huston started dating Dion in 2017. But lately, many of his fans are wondering if he is still in a relationship with Dion.

So, here, find out if Kateri Dion is still Nyjah Huston’s girlfriend or both have parted their ways away.

According to various online sources, Nyjah Huston started dating the health, fitness, and beauty blogger Kateri Dion in 2017. It is also speculated that they might have started their romance before that. But their romantic relationship went public when Huston shared some pictures of them hanging out together for some months.

Furthermore, the social media influencer Kateri Dion and pro-skateboarder Nyjah Huston enjoyed their romantic relationship for a while. They even attended public events together when they were together. But, it did not last long. They seem to have separated at the end of 2019 as Dion is in a relationship with another guy.

Currently, the former girlfriend of Nyjah Huston, Kateri Dion, is in a relationship with Dominic Nora. Moreover, it has been so long since Huston and Dion appeared in public together. So, it clearly seems like Kateri Dion is not Nyjah Huston’s girlfriend now.

After separating from Kateri Dion, the award-winning skateboarder, Nyjah Huston started showing himself more with another girl named Alexa Adams. Adams is also a famous social media star with nearly 470K followers on her Instagram page as of May 2021. She regularly shares fitness and modeling content on her page. Moreover, Alexa is also one of the hosts of a cooking podcast, 3 Girls 1 Kitchen.

Could it be that Alexa Adams is the current girlfriend of Nyjah Huston? Though she has not shared a single picture of Huston on her social media handles, she at times appears on Huston’s Instagram. Seeing their photos together on social media handles, it can be presumed that the pair are dating one another. Moreover, Alexa Adams also shares a love for skateboarding with Huston.

In January 2021, YouTuber FaZe Kay shared a video titled ‘Swapping Girlfriends with FaZe Jarvis‘ on his YouTube channel. In the video, Adams appeared as FaZe Kay’s girlfriend. Before that also Kay had uploaded a video with Alexa where she asked him if he actually will be her boyfriend, and Kay accepted it. But, they separated within two months. It looks like all of those videos were just a part of their pranks.

Nevertheless, Alexa Adams is possibly in a relationship with her rumored boyfriend Nyjah Huston at the moment. We hope this time Huston will be successful in his love life.

Before being in a relationship with Alexa Adams and Kateri Dion, Nyjah Huston was romantically linked with many ladies. Few months before starting a relationship with Dion, Huston allegedly dated the South Africa-born singer and DJ Madison Louch for a while. The rumors of Huston dating Louch came in the news after Louch posted a photo with Huston on her Instagram.

Similarly, it’s speculated that Nyjah Huston dated models Taylor Sharpe, Cassidy Wolf, and Daniella Grace. The rumored pairs often shared photos with one another on their social networking handles and even were seen in public, resulting in speculations of them dating.

But, for now, Nyjah Huston seems to be committed to Alexa Adams and, without any doubt, to his first love, Skateboarding. We hope to hear more about Nyjah Huston’s girlfriend, Alexa Adams, and the reality of their relationship.