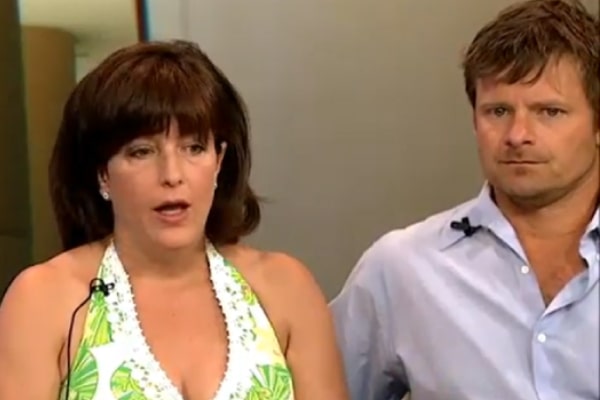 Steve Zahn and his wife, Robyn Peterman, have been married since 1994. Image Source: Social Media.

Born Steven James Zahn, Steve Zahn is a talented actor and comedian of American nationality. He is famous for his roles in movies and television series like Reality Bites, That Thing You Do!, Stuart Little, Treme, and The White Lotus. The Primetime Emmy Award nominee has accumulated enormous fame and fortune in his career.

Owing to his reputation, the Minnesota native’s personal life has also come into the limelight. Well, the outspoken actor is a married guy with kids. So, who is Steve Zahn’s wife, Robyn Peterman? Let’s get to know the loving partner of the accomplished actor and comedian in this article.

Is The Daughter Of A Businessman

Robyn Peterman aka, Robyn Zahn, is the daughter of John Peterman and his wife, Audrey Peterman. Her father is a renowned catalog and retail entrepreneur from Lexington, Kentucky. He is the founder and chairperson of J. Peterman Company. Likewise, Mrs. Peterman is a vice president of women’s merchandising at her partner’s company.

The comedian’s spouse has three siblings, Sean Peterman, Timothy Peterman, and Matthew Peterman. Her brother Sean was a cattle and grain farmer who passed away in a farming accident in Lexington, Ky, on 23 July 2015. Moreover, her brother, Timothy, was the CEO of their father’s company from 2008 to 2014. Likewise, Matt started working as a creative director around 2014.

Anyways, Steve Zahn’s wife, Robyn seems to have grown up comfortably with her family. Also, the beautiful woman must have completed her education according to her profession.

The Reality Bites star’s spouse is one of the bestselling authors in the New York Times and USA Today. She was determined to become a novelist when she read a bad novel and wanted to write one herself. Furthermore, she authored her first published book in two weeks and even got offers for it.

As per her official website, Mrs. Zahn writes because the people inside her head won’t leave her alone until she gives them life through her books. In addition, her writing is snarky, funny paranormal, and sexy contemporaries.

The author is best known for her The Hot Damned, Magic & Mayhem, and Shift Happens series. She has published a total of eight series and fifty-seven books till now. The table below lists the talented author’s book series.

Apart from being an established writer, Robyn also has a few acting credits. She has appeared in Sour Grapes and Boys & Girls.

Robyn Peterman Net Worth And Earnings

As one of the bestselling writers, Steve Zahn’s wife must be earning a huge sum. As reported by Glassdoor, a writer or author earns an average salary of $85,490 per year. However, the comedian’s better half is one of the best-selling authors. Thus, she must earn more than average. As a result, Robyn Peterman’s net worth must be a considerable sum.

Some of her books and their prices are listed below in the table.

Likewise, Robyn’s official website also lists some of her merches. She must be earning considerably from the sales. On the other hand, the author’s life partner, Steve Zahn’s net worth is $20 million. He amassed it all from his career as an actor and comedian. Furthermore, the Zahn family must be living a comfortable lifestyle, all thanks to their massive riches. Let’s hope they will continue to enjoy a more luxurious life in the coming days.

The prominent actor-comedian Steve Zahn shares a blissful marital life with Robyn Peterman Zahn. The couple has been married since 16 July 1994. The adorable pair first met on a national tour of the musical Bye Bye Birdie in 1991. Ever since, they have been happily together.

Additionally, the pair are very supportive of each other’s careers. Robyn Peterman’s husband often promotes her books on his social media accounts. Nonetheless, the pair are enjoying their togetherness and share a deep love and understanding. Hopefully, their bond will last forever.

Is A Proud Mother Of Two

The Zahn couple has been married for three decades. During their long marital journey together, they welcomed two adorable kids. Their son, Henry James Zahn was born on 3 April 2000, and their daughter, Audrey Clair Zahn arrived on 25 April 2002.

The Zahn siblings must have grown up having a wonderful time together. In addition, the Zahn family must share a tight-knit bond.

Steve Zahn’s daughter goes to Baldwin Wallace University and is set to graduate in 2025. She is pursuing her bachelor’s degree in music and theatre. On the other hand, it is not known what his son Henry is pursuing.

Nonetheless, Steve Zahn’s wife is a talented author who has written several bestselling books. Plus, she is a loving wife and a proud mother to their kids. We wish Robyn Peterman a more prosperous life ahead.