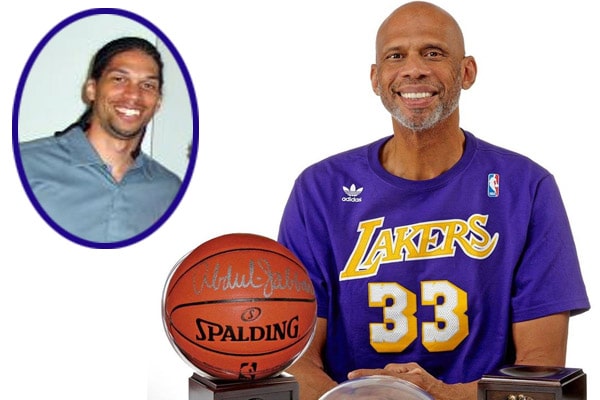 Born on 23 August 1976 in C.A., USA, Kareem Abdul-Jabbar Jr. is also in the basketball field like his legendary father. Know more facts about this hunchback, including his net worth, married life, and many more here.

Kareem Abdul-Jabbar Jr. is the eldest son of Kareem Abdul-Jabbar with his former wife, Habiba. He has two siblings; Habiba and Sultana and two half-siblings; Amir and Adam from his dad’s two other relationships. Adam has been in the news for stabbing his neighbor during a dispute. He was subsequently sentenced to jail for 180 days for his crime.

Abdul-Jabbar’s parents separated after his birth in Washington D.C. and legally split-up shortly after his sister Sultana was born. After the divorce, Kareem Junior stayed with his mother and visited his father Kareem only on holidays and during the offseason. The closer Abdul-Jabbar Jr. became with his father, the more he excelled in the classroom and on the court.

Kareem Abdul-Jabbar Jr. went to Brentwood School. Junior used to play sports including baseball and soccer and was attracted to football too. Furthermore, Kareem jr, enjoyed skiing and fishing too. But later after joining high school, Western Kentucky, Abdul-Jabbar Jr. played and flourished in basketball only. And now he is a pro-basketball player.

While it came to sports, Kareem Abdul-Jabbar’s children were free to make their own choices. The only things he forced his sons to do was martial arts to develop some discipline. Though, his eldest son Abdul-Jabbar Jr. chose to follow his footsteps in the basketball.

Abdul-Jabbar Jr.’s legendary father always loved the fact that his son was good and had fun playing basketball. And, with the same spirit, the 6 ft. 6 inches tall, Abdul-Jabbar Jr. played against his father at the age of twenty-five. He performed one season at Valparaiso, one year at Santa Monica College, and two seasons at Western Kentucky.

While playing with USBL Brooklyn Kings, Abdul-Jabbar Jr. has already played in the IBA and the IBL. Junior Kareem has played 14 games, beginning eight and is averaging 10.6 points and 5.8 rebounds in 29.5 minutes. Kareem Jr. was titled a male sports scholar of the year in 1999. Black Issues in Higher Education awarded the honor named after the late tennis great Arthur Ashe Jr. It was a proud moment for Kareem Abdul-Jabbar.

The Junior Abdul-Jabbar is famous for performing in various T.V. series, including The Sarah Silverman Program (2008), Monster Night (2006), and Church Ball (2006). During the filming of Church Ball, he became a good friend with comedian Sina Amedson. Both shared a trailer on the set of their film for two weeks.

Net Worth of Kareem Abdul-Jabbar’s Son

Besides earning as a basketball player, Kareem Jr. adds some dollars to his cash flow from his appearance in the T.V. Series and movies. For now, we can say that Kareem’s Junior might be living a luxurious life with his wealth.

Abdul-Jabbar, Jr. prefers life away from the spotlight. He doesn’t have any social media accounts in his name. Moreover, Kareem Jr. does not appear in the public programs along with his celebrity father. Hence, the 44-years old Abdul-Jabbar Jr.’s love life is a complete mystery. There is no trace of him tying a marital knot.

When it comes to Kareem Abdul-Jabbar Jr.’s children, it is also entirely away from the public’s prying eyes. If he is married or has children too, he has kept it hidden from the paparazzi. So, it’s quite difficult to disclose the inner life of Junior Kareem.

In Arabic, the name meaning of Kareem Abdul is a noble and powerful servant of Allah.