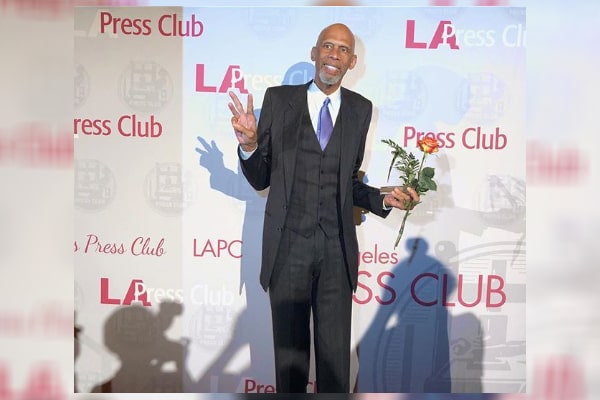 Kareem Abdul-Jabbar, the lion of the Lakers, played 20 seasons in the NBA with the Milwaukee Bucks and the Los Angeles Lakers. The retired NBA star remains the all-time leader in points scored, career wins, and is named the second-best player in the NBA history behind Michael Jordan.

Jabbar is the GOAT without a doubt; however, he is also a phenomenal dad of five with different partners. Today, we will be talking about Jabbar’s son, Amir Abdul-Jabbar, with his ex-girlfriend, Cheryl Pistono. Behold the son of the greatest, Amir Abdul-Jabbar.

Kareem Abdul Jabbar is known for his basketball career and generosity. Besides being a fierce player, he is also a doting father of five. Among his children, he welcomed one son with his long-time former girlfriend, Cheryl Pistono.

Jabbar’s eldest son, Amir Abdul-Jabbar with Cheryl Pistono is a well-groomed and an intelligent human being. He grew up with his half-brother, Adam Abdul-Jabbar, who is infamous for his arrest after stabbing his neighbor in Orange County multiple times. He has been sentenced to six months in jail for the incident.

However, Amir’s childhood was not drama-free as Kareem’s business manager, Thomas M. Collins, sent his mother a letter claiming that he had reason to believe that Amir was not Kareem Abdul-Jabbar’s son. Ms. Pistono got a letter where he claimed his beliefs and even managed to convince Jabbar of his suspicion. Later they had to take a court-ordered blood test to prove that they were indeed related.

Amir Abdul Jabbar’s parents met in 1977 and moved in with him from 1977 until their breakup in 1984. According to the LA Times, Amir’s mother impacted Kareem’s life greatly as she persuaded him to divorce his first wife, Habiba Abdul-Jabbar, with whom he has three children. After the split, Amir’s physical custody was handed to Cheryl and she received monthly child-support payment.

According to the magazine, Kareem Abdul-Jabbar’s ex-girlfriend had physical custody of their child. Well, Amir grew up to be a fine man with a successful career in the medical field.

As mentioned above, Kareem Abdul-Jabbar’s son Amir is an intelligent man and is a successful doctor. He is an orthopedic surgery specialist in Washington and currently practices at Swedish Neuroscience Institute. He is affiliated with Swedish Medical Center- Cherry Hill Campus and Swedish Medical Center – Issaquah Campus.

Graduating from the University of California at San Fransisco medical school in 2012, he has decades-long experience in the medical field. He even assisted his father with some insights after he was diagnosed with leukemia. He was a third-year medical student in San Fransisco at the time.

Amir Abdul-Jabbar’s father, Kareem, is exceptionally proud of his son, who made his dream to be a children’s orthopedic surgeon come true. Amir’s intelligence and assistance during Kareem’s recovery journey brought them closure. Furthermore, according to People, Kareem proudly talks about his son and jokes about having someone to give good references in the coming days.

Amir Abdul-Jabbar’s half-siblings are all leading a secretive life as their father, Kareem, who is known for his secretive notoriety. However, Kareem Jr. played basketball at Western Kentucky after attending Valparaiso.

Well, one of Amir’s half-sibling sibling, Adam Abdul-Jabbar, appeared on the TV sitcom, Full House with Kareem. The infamous arrest of Adam after stabbing his neighbor made several headlines.

Regardless of Amir’s different sets of siblings and their careers, we do think they share a great bond. Also, a thing to mention about Kareem Abdul-Jabbar’s son with Cheryl, Amir is that he is away from the social media. However, at times his father does post about him on his Facebook.

Therefore, let’s hope we get to hear more about the talented Amir Abdul-Jabbar in the future.

Amir means prince, rich, or cultivated and is of Arabic origin.