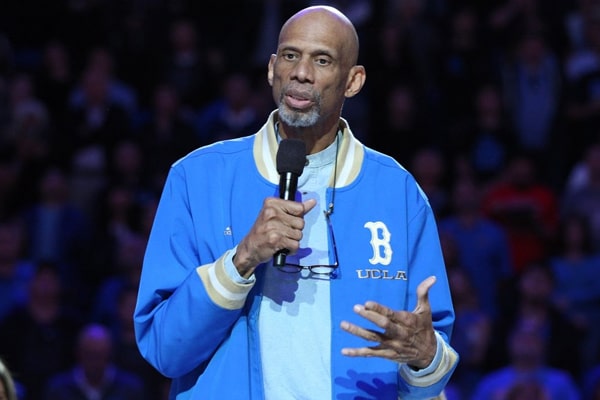 Kareem Abdul-Jabbar, the greatest player in NBA history, played 20 seasons in NBA. Voted as one of the best players behind Michael Jordan, Jabbar manages to secure his name as the all-time leader in points scored, field goals made, and career wins.

Besides being a living-legend, Kareem Abdul-Jabbar is also a doting father of five from three different partners. Today, we will be tailing Kareem Abdul-Jabbar’s son, Adam, who accompanied him in the show Family Feud in 2017. So, buckle up for some news.

Aforementioned, Kareem Abdul-Jabbar is a proud father of five from three different women. Among them, Jabbar’s son, Adam Abdul-Jabbar, is his youngest child with Julye Olds. According to the LA Times, the 7’2″ basketball legend’s former partner gave birth to the longest baby.

Born on Septemeber 24, 1991 to Julye Olds, Adam was 22 3/4 inches long during his birth. Likewise, Kareem named his son after Adam Clayton Powell, a pastor and politician. Adam grew up with his mother and her partner in Atlanta and moved in with an older woman/ Adam’s adopted grammy, Evelyn Calvert, after he graduated high school.

Adam Abdul-Jabbar’s mother has maintained her privacy since she separated from Kareem and continues to do so. Let’s hope she is in good health.

Likewise, Kareem Abdul-Jabbar’s ex-girlfriend, Cheryl Pistono, gave birth to their only son Amir Abdul Jabbar who has grown up to pursue his career as an orthopedic surgery specialist in Washington.

Like Adam, his half-siblings have been living a tranquil life away from the media scrutiny.

Appeared In A T.V. Show Alongside His Father In 2017

Although Kareem Abdul-Jabbar’s son, Adam Abdul-Jabbar, lived most of his life away from the media scrutiny, he has appeared in a tv show alongside his father.

Kareem appeared in a television show called Family Feud hosted by American comedian and businessman, Steve Harvey. He was accompanied by his sons, Amir and Adam Abdul-Jabbar, his cousin, Rose-Ann, and nephew.

However, Family Feud is the only television show Adam made an official appearance on. Besides that, he has maintained to live his life away from the public’s eye. Interestingly, sons of the legendary basketball player are not interested in the NBA at all.

Papa Jabbar is known for his philanthropic acts alongside his basketball career. However, his son, Adam, has come into the spotlight for stabbing his neighbor.

Adam Abdul-Jabbar was arrested in June 2020 for stabbing his neighbor, Ray Winsor, multiple times in Orange County. The arrest was first reported by TMZ, which noted that he had been booked on one count of assault with a deadly weapon.

Jabbar’s son was later released after posting bail for $25,000 bail. Adam also apologized to Winsor’s wife about the incident the day after.

According to Orange County Sherriff’s Department spokesperson, the alleged victim, Raymond Winsor, took himself to a local hospital with several injuries after being stabbed. He was hospitalized with numerous ‘non-life-threatening’ injuries for three days.

Furthermore, in an interview with KABC, Raymond talked about how he knew Adam since his childhood.  He further spoke about Adam living with an 83-year-old woman and not helping with household chores.

During the interview, the 60-year-old victim revealed that he confronted Kareem’s son to help his ‘Grammy’ with trash, but Adam threatened him to ‘stick a knife through his teeth.’ Then the rest is history.

Aforementioned, the Lakers’ legend, Kareem Abdul-Jabbar’s son, was arrested for allegedly stabbing his neighbor and released after $25,000 bail.

However, the saga didn’t end there as the victim, Raymond Winson, sued Adam for the emotional distress caused by the incident. The victim professed that he suffered a skull fracture and a subdural hematoma and was hospitalized for three days.

Moreover, Winsor also claimed that he suffered from shock, depression, anxiety, and much more and hence wants Adam to pay up for his medical charges as well as additional damages.

In an update of TMZ’s report, Adam’s counsel, Shawn Holley, told that Mr. Winsor’s stories were inconsistent about the incident, and he smoothly failed to mention that he provoked the conflict by attacking Adam first.

According to TMZ, several people connected to the incident also imply that Winsor had been badgering Adam for a long time.

On November 10, 2021, Kareen and Julye’s son was sentenced to 180 days in jail. He pleaded guilty to one count of carrying a dagger and three counts of assault with a deadly weapon.

Adam Abdul-Jabbar accepted a plea deal and his sentencing was stayed until January 7. He can now apply for home confinement instead of incarceration.

Adam means a man in Hebrew while Abdul means servant of.