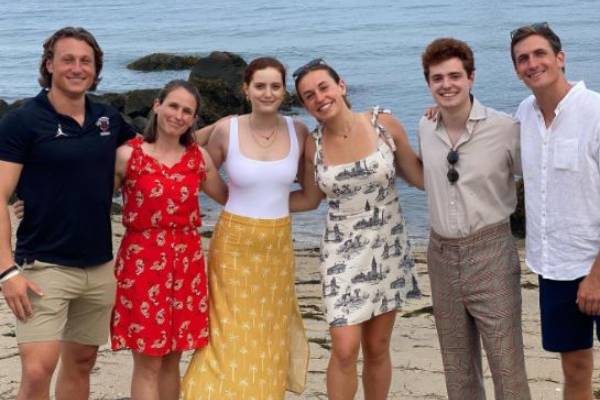 Anthony Mason is an American journalist and broadcaster. He has been working with CBS News since 1986. Substantially, Anthony began his journey with CBS News as a journalist being assigned to the London bureau from 1987-1990. Since then, he has been the senior culture and national correspondent for the network.

Besides being a successful news reporter and correspondent, Anthony Mason is also a family man. He is currently married to his beautiful wife, Christina Anne Unhoch. During their marital life, the couple has welcomed two precious children together. Mason also has another child from his previous marriage. So, in this article, let’s get to know about Anthony Mason’s children.

Has A Daugther From His Previous Marriage

Anthony Mason has been married twice in his life. Before his marriage with Christina, he was married to American newspaper columnist Amy Dickinson. Amy and Anthony were married in 1986. However, their marriage didn’t work out, and the couple separated in 1990.

Nonetheless, Anthony has a daughter from his previous marriage with Amy named Emily Mason. She was born in Washington DC and went to Francis W. Parker School to complete her high school education. Furthermore, Emily attended William & Mary University to study English Literature. She currently resides in Illinois with her husband.

Emily is married to a salesman named Jesse Chapman from Chicago, Illinois. She is very close with her mother and is often spotted on Amy’s Facebook page. Professionally, Emily is a brand engagement specialist at SpotHero as per her Facebook profile.

After separating from Amy, Anthony Mason got married to Christina Anne Unhoch in 1994. Like Anthony, Christina was also into news and reporting. Before meeting him, she worked as a manager and translator in Interfax News Agency in Moscow.

Anthony and Christina have been married for more than twenty-five years. During this period, the love birds have welcomed a son Nick Mason and a daughter Olivia Mason together.

Anthony Mason’s children seem to have grown up now. His daughter Olivia was born in New York and attended St Andrews University. She seems quite private about her life and it is unclear if she is in a relationship.

Anthony’s Son Has Worked Under Him

On the other hand, Anthony Mason’s son Nick was born on 20th April and looking at his Instagram account, he seems to be an advocate for the Black Lives Matter movement. He attended Boston University and even worked part-time as the college’s ambassador. Nevertheless, the talented son has worked with his father Anthony in many of his interview segments.

Nick Mason worked as a production assistant manager filming his father’s interviews with big personalities such as Bill Gates, Daniel Levy, Maren Morris, etc. Prior to working with his father, Nick interned at the Electric Lady Studios as client relation manager.

However, we don’t know if Anthony Mason’s son is in a relationship as anything related to Nick Mason’s girlfriend is a big mystery.

His Children Are Living A Quiet Life Away From The Media

Being a popular figure in the American household, Anthony used to be on everyone’s television early in the morning. However, his kids are not so popular and familiar with the public or the media.

Out of Anthony Mason’s children, his elder daughter from previous marriage could only be found on Facebook. However, she seems to be enjoying life with her partner in Chicago. Besides this, both his kids from the second marriage are available on Instagram, but their accounts are set to private.

In addition, Anthony does share pictures of his children on his Instagram account but has never tagged them or mentioned their social media handles. It seems he wants his kids to stay away from the limelight. Nonetheless, we wish Anthony Mason’s kids all the best for their future.

The word Emily is derived from the Roman language. It means rival.

Nick is a word derived from Greek origin. It means victory for the people.